On Nov. 22, Fr. Roy Bourgeois addressed 12,000 people gathered outside Fort Benning, Ga., to protest the Pentagon’s training of Latin American militaries. It was the nineteenth year in a row Bourgeois was present at the School of the Americas Watch demonstration he founded in 1990. But this year was different. It was his first appearance as a layperson, not as a priest.

Bourgeois had recently been excommunicated by the Vatican for participating in the ordination of a woman, Janice Sevre-Duszynska, as a Roman Catholic priest on Aug. 9. At a ceremony in Lexington, Ky., Bourgeois acted as a concelebrant and homilist, the first time “a male Roman Catholic priest in good standing publicly joined the ceremony,” according to the National Catholic Reporter.

Noting that he met Sevre-Duszynska through the School of the Americas Watch movement, Bourgeois said in his homily, “Just as soldiers in Latin America … abuse their power and control others, it saddens me to see the hierarchy of our church abusing their power and causing so much suffering among women. Jesus was a healer, a peacemaker, who called everyone into the circle as equals.”

According to Bourgeois, he received a letter from the Vatican’s doctrinal watchdog group dated Oct. 21, “giving me 30 days to recant my belief and public statements that support the ordination of women in our Church, or I will be excommunicated.” 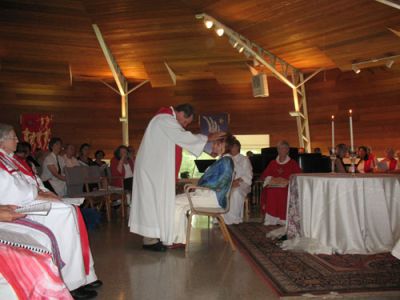 Excluded for being inclusive: Fr. Roy Bourgeois (center) participates in the ordination of Janice Sevre-Duszynska (seated, center) as a Roman Catholic priest Aug. 9. He has since been excommunicated from the church for his actions.

Bourgeois’ actions have heightened the visibility of a small, but growing, group of female priests that has emerged since seven women were ordained on the Danube River between Germany and Austria in 2002. The “Danube 7” were ordained by Rómulo Antonio Braschi, an independent bishop who broke with the Catholic hierarchy in the 1970s. It is now estimated that there are about 50 women priests and deacons worldwide and a handful of female bishops. Sevre-Duszynska is one of 35 women in the United States who have been ordained in the past two years.

For Sevre-Duszynska, 58, ordination was the culmination of a lifelong struggle to be treated as an equal in the Catholic Church. Growing up on Milwaukee’s south side, she attended Mass “wanting to hear feminine images of God” and sought to become an altar girl, but instead was given the task of cleaning the dressing room where priests prepared before Mass.

In recent years, Sevre-Duszynska has been arrested for interrupting Catholic ordination ceremonies in several states in order to plead for women’s ordination. She disrupted a Lexington ordination in 1998 to ask then-Bishop J. Kendrick Williams to make her a priest, but he refused. In 2000, she went to a conference in Washington, D.C., where she grabbed the microphone and called for the ordination of women. Two years later she was arrested in Atlanta, Ga., after protesting the ordination of deacons. At these events, Sevre-Duszynska donned priestly robes and a purple stole to symbolize the lost gifts of women.

Catholic Church policy has long insisted that Jesus’ choice of 12 men to be his apostles disqualifies women from the priesthood. Hopes grew during the 1970s that the Vatican would relax its position on female ordination, but the church has remained unbending in its stance throughout the past three decades under the leadership of Pope John Paul II and Pope Benedict XVI.

According to Aisha Taylor, executive director of the Women’s Ordination Conference, the oldest and largest organization advocating female priests, the ordination movement began when Catholic women realized they would have to act on their own.

“We’ve tried dialogue, tried to go about it in every other way. We have to go to extreme measures,” Taylor said. “How do we do it differently? How do we change the structures and not just ordain women into the same secretive, nontransparent and unaccountable structure where the clergy sexual abuse crisis was able to happen?”

The women priests movement emphasizes building a more inclusive church and that reforming spirit is evident in its welcoming of priests regardless of their marital status or sexual orientation.

“It wasn’t just adding women and stirring. We incorporate the reforms we’ve been talking about all these years,” said Sevre-Duszynska. “We do not take a vow of obedience to our bishop. It’s not just about getting us ordained.”