Winter Soldier Iraq and Afghanistan: Eyewitness Accounts of the Occupations
By Iraq Veterans Against the War and Aaron Glantz
Haymarket Books, 2008

The cliché tells us that war is hell and dozens of books and films attest to the magnitude of the horror and carnage that define armed conflict. Now, two new texts drive the point home by focusing on U.S. aggression in Iraq and Afghanistan. 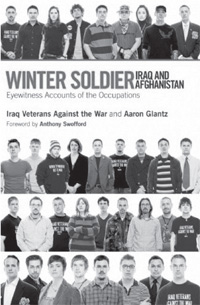 Winter Soldier, a compilation of testimonies from 53 veterans, Iraqi civilians and parents of dead service members, is gut-knotting. While there are no African-American voices in the collection — an unexplained omission that is especially odd since more than 17 percent of U.S. soldiers are Black — the statements are a grim reminder of the lawless and shockingly racist and sexist nature of combat.

Patterned after the 1971 Winter Soldier hearings — eyewitness accounts that heralded a shift in public opinion against U.S. involvement in Vietnam — a speakout in March 2008 was organized by Iraq Veterans Against the War to coincide with the fifth anniversary of the occupation. Held less than ten miles from the White House, the event was meant to educate both lawmakers and the public about the conflict. Predictably, neither George Bush nor Dick Cheney attended and the proceedings received scant attention from mainstream media.

It’s a pity — maybe even a crime — that the Masters of War have remained insulated from the poignant accounts of men and women on the front lines.

They need to hear from soldiers like Hart Viges, a 32-year-old veteran of the Army’s 82nd Airborne Division, who began his testimony with a confession. “I don’t know how many civilians — innocents — I’ve killed or helped kill.” He then describes an encounter with an Iraqi man carrying a rocketpropelled grenade. “I had my sight on his chest … but when I looked at his face, he wasn’t a bogeyman. He wasn’t the enemy. He was scared and confused, probably the same expression I had on my face. … He was probably force-fed the same BS I was fed. I’d seen his face and it took me back and I didn’t pull the trigger.”

He describes an attempt to capture several alleged terrorists. “We never went on a raid where we got the right house, let alone the right person, not once,” Viges admits. In one incident, he reports that a woman whose home he invaded got on her knees, pleading that she and her sons had done nothing to antagonize the United States. “The mother all the while is crying in my face, trying to kiss my feet. I can’t speak Arabic, but I can speak human. She was saying, ‘Please, why are you taking my sons? They have done nothing wrong.’ I was powerless to help her.”

For 23-year-old Christopher Arendt, a U.S. Army National Guardsman from Charlotte, Mich., a stint in Guantánamo explained how easy it is for people to become the equivalent of Nazi storm troopers. “The primary difficulty in keeping my humanity intact was boredom,” he begins. While he says that he was able to sidestep the most egregious violations of prisoners’ human rights, his descriptions of detainee torture are harrowing.

Still, it is testimony from Iraqi civilians that packs the hardest punch. “We were in class,” says 11-year-old Shayma. “They said there were weapons or terrorists in the school.” Not surprisingly, a search turned up nothing. “After that my mother and father decided I should quit school,” Shayma says. “They had to because of the deteriorated security situation. … Most of my friends and classmates made the same decision and stopped going to school. Half the teachers also stayed home, concerned about their lives.”

Parents of dead GIs further expose the devastating personal impact of the two wars. “An average of 120 veterans commit suicide each week,” say Joyce and Kevin Lucey, parents of former U.S. Marine convoy driver Jeffrey Lucey. When Jeff returned from combat, they explain, he was severely depressed and suffering from posttraumatic stress disorder (PTSD) and panic attacks. He began drinking heavily — some would call it self-medicating. The Veterans Affairs hospital refused to treat him unless he was sober.

“Jeff said he wanted to tell the psychiatrist conducting his discharge interview about the bumps in the Iraq road that were the children his Marine convoy was told not to stop for and just not look back,” his mother Joyce testified. “He decided not 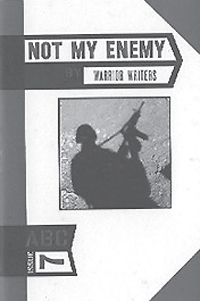 to reveal this deeply sensitive information when the psychiatrist interrupted their session three times to answer phone calls.” Desperate to stop the memories that haunted him, Jeff hanged himself in his parents’ home June 22, 2004, at age 23.

The difficulties in adjusting to life after war are further exposed in Not My Enemy, a zine of poetry, art and prose crafted by 22 returning soldiers and IVAW members. Rich and evocative, the entries ask poignant questions. There’s “PTSD,” a short poem by Matt Howard: “Post-Traumatic Stress Disorder / How is this a disorder?/ How about a going to war and coming home with a clear conscience disorder?/ I think that would be far more appropriate.”

Camilo Mejia, the first U.S. soldier incarcerated for publicly refusing to return to Iraq, closes Winter Soldier with clear demands: Immediate and unconditional withdrawal of all occupying forces; full benefits to all military personnel; and reparations to the people of Iraq so that they can rebuild their country.

President-elect Barack Obama would be wise to heed these injunctions.