Government repression in Mexico rarely makes headlines in the United States, and the few stories published almost never mention the northern migration patterns it sets in motion. This is the context David Bacon provides in Illegal People.

Using anecdotes gathered from two decades of labor organizing and reporting, Bacon follows the way “economic reforms promoted by the U.S. government through trade agreements and international financial institutions displace workers, from miners to coffee pickers, who join a huge flood of labor moving north.” He examines the impact of these “reforms” on both sides of the U.S. border. The result is well-rounded analysis of the forces shaping and benefiting from migration.

Many critics of the North American Free Trade Agreement (NAFTA) focus on the way it undermines labor rights and environmental regulations in order to clear the path to more profits for U.S. corporations. When these economic changes led to lower wages, workers for companies such as mining giant Grupo Mexico went on strike. Unlike pre-NAFTA campaigns, these strikes ended in destroyed unions and terminations.

“Most of the miners who lost their jobs at Nacozari [a Grupo Mexico mine] also had to leave their homes,” explained Jorge Luis Morales, president of the Vigilance and Justice Commission of the union at the Cannanea mine. “I’m sure most of them are working in Tucson or Phoenix now, or even California. They are very skilled workers, but where else could they go?”

Bacon argues NAFTA also serves as a cheap labor supply program for U.S. corporations on this side of the border, providing undocumented immigrants as an exploited class of workers. Paid less than minimum wage and forced to work long hours in often unsafe conditions, these workers are cowed into silence lest employers report them to immigration officials. 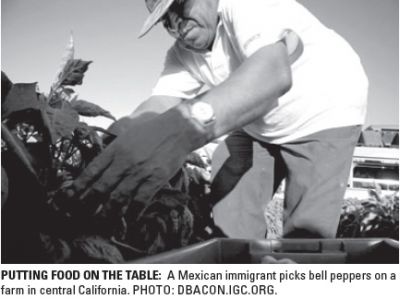 Corporate lobbyists are working to enshrine these working conditions into law in the form of temporary visa and guest worker programs. First considered under the Bush administration as part of immigration reform efforts, these programs will likely be supported by Democrats under Presidentelect Obama as a way to avoid being accused of supporting amnesty. In a chapter entitled “Fast Track to the Past,” Bacon outlines the true cost of these programs from the worker’s point of view.

Starting with contract workers’ memories of the two-decade-long Bracero program that brought an army of transient workers to the United States from 1942 to 1964, he moves into the present with accounts from agricultural workers with temporary visas who found themselves blacklisted for speaking out about dangerous conditions such as lack of protection from exposure to pesticides. The most harrowing story is told by Edilberto Morales, the lone survivor of one of the worst accidents in the history of guest worker programs in which 14 of his co-workers died.

Morales describes how he and his friends were speeding across a bridge deep in the woods of Maine in order to shorten the unpaid time it took to travel to their job planting trees. The men worked for Evergreen, a company contracted by paper manufacturing giant Kimberly Clarke. When one of its tires popped, the van skidded off the bridge and fell into the Allagash River. In the freezing water, Morales tried to save his friends, “but they were dead.”

Despite years of being fined by the U.S. Department of Labor for violations in how they paid, and not counting hours of unpaid overtime, Bacon reports that Evergreen continues to receive the certification required for employing H2-B guest workers.

Perhaps not surprisingly, a poll of San Francisco’s street-corner day laborers by the city’s Day Labor Program found that workers rejected guest worker programs as the solution to immigration reform. “They feel that a temporary visa status would make them as vulnerable to exploitation as the undocumented status most of them now share,” program director Renee Saucedo tells Bacon.

Looking outside the circle of politicians and lobbyists, Bacon brings to the reform discussion voices of those who can help solve the riddle of immigration reform with workers’ rights in mind. They provide the evidence of the abusive and often deadly effects of the current immigration system.

Indeed, Bacon argues, “it would be a terrible misuse of the fate of those workers if their deaths were used to justify a new system enshrining the abuses of the old.”

Renee Feltz is the co-producer of businessofdetention.com