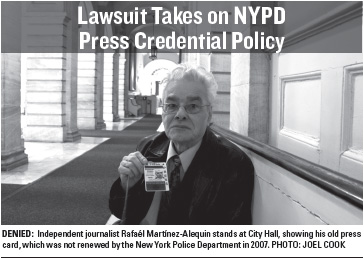 The lawsuit filed on behalf of three New York City-based journalists whose 2007 applications for press credentials were denied by the NYPD claims that the city’s actions “have resulted in unconstitutional and unlawful interference with and prevention of news coverage in New York City and beyond.” The three journalists all say that the NYPD has not provided justification for why each one was denied press credentials and that the department has not answered their appeals. As a result, the plaintiffs allege violations of their Fourteenth Amendment rights to due process and equal protection under the law.

“The system of granting press credentials in New York City has run amok and needs to be changed immediately,” said Norman Siegel, a prominent civil rights attorney who is leading the lawsuit. “We cannot allow the City of New York, the police department, to trample on the fundamental rights of journalists.”

The lawsuit is challenging the NYPD’s “unconstitutionally vague” criteria for defining who is qualified to carry city-issued press credentials. According to the NYPD’s Office of Deputy Commissioner for Public Information, an applicant must submit three articles that have been published in print media within the last six months and a cover letter from a news director or editor. For individuals publishing largely for online-only news organizations or blogs, the policy seems unclear.

Plaintiff David Wallis is a long-time freelance and online journalist who has contributed to a wide range of publications including the New York Times, The New Yorker, Esquire, and the Village Voice and has held press credentials on and off since 1994. Wallis is the founder of Featurewell.com, which provides news organizations worldwide the opportunity to purchase articles and photographs from the materials featured on the website. Wallis said he continues to write for both the traditional print media as well as online-only publications.

Wallis questions why the NYPD should be granted the power to decide which journalists are “legitimate” enough to receive city-issued press credentials. “Should they really be in the business of deciding the legitimacy of news organizations?” he said.

After not holding press credentials for a short time because he was editing two books, Wallis applied to NYPD to renew his press identification card Aug. 6, 2007. He says that he was promptly denied, without reason.

“It doesn’t seem like any thought went into it,” Wallis said. “There’s a possibility that it has to do with the fact that they may have seen the dot com along with Featurewell.” Wallis said that although he noted his website in the application, his three article clips were published in print media. He filed an appeal three days later, and has yet to receive a response from the department.

Plaintiff Rafaél Martínez-Alequin is a longtime independent print and online journalist who published the Brooklyn Free Press from 1983 to 2003 and said he held credentials off and on for nearly 20 years. According to a June 16, 2007, New York Times article, over the years he became a well-known reporter at city press conferences, earning a reputation as a “gadfly” who asked discomforting questions about race and class to New York politicians.

“The mayor does not like questions I ask him concerning issues that are affecting the Latino, the Afro-American and the poor communities,” Martínez-Alequin said. He says that although he is currently allowed to attend news conferences without a press card, nobody calls on him to ask questions.

In 2003, Martínez-Alequin switched to publishing online only and renamed the publication to be the New York City Free Press. He also writes on a related blog, yourfreepress.blogspot.com. “This is an issue that is very important because we are living in a new technological age,” Martínez-Alequin says.

Plaintiff Ralph E. Smith publishes GuardianChronicle.com, a blog that focuses primarily on law enforcement issues, community groups and youth in the city. He is currently a Public Information Officer for the New York City Corrections Department who held a working press card since 1996 until his application for renewal was also denied in 2007. Smith says that he has yet to receive comment from NYPD regarding why his application was denied.

The city’s request to delay its response to the lawsuit until Jan. 16, 2009 has been granted.

The NYPD’s Public Information Office failed to return several requests for comment by The Indypendent.

A similar lawsuit, filed by the New York Civil Liberties Union (NYCLU), involves longtime police reporter Leonard Levitt, whose press credential renewal application was denied by the NYPD in January 2007 after he held credentials for 24 years. After working for Newsday, the Associated Press and the New York Post, Levitt founded NYPDConfidential.com, a website that investigates the police department. NYCLU lawyers have filed a Freedom of Information Act request to examine the city’s standards and procedures for issuing press credentials and to obtain documents about Levitt’s application. The case is pending.

Other New York City-based online-only publications have reported encountering similar troubles. “Since the summer of 2007, we [Gotham Gazette] have been denied a press identification card, which would assist us in accessing certain crowded/exclusive City Hall events,” wrote Courtney Gross, the city government editor for GothamGazette.com Nov. 13. “The NYPD’s reason: that we are online only, sans a tangible, ink-stained print publication.”

Gothamist.com publisher and co-founder Jake Dobkin described in an April 27, 2005, online article when he inquired about his application for press credentials, an NYPD employee told the publication “that websites were not eligible for NYPD working press credentials.”

“Access to newsworthy events and things like press passes should go to those who are consistently doing reporting for a real public,” said Jay Rosen, a faculty member in New York University’s Journalism Department and the author of the blog PressThink, in an email to The Indypendent. “It’s the journalism that should make the difference, not the journalist’s background, credentials, or employer.”

The issue of granting access to journalists and bloggers whose work is primarily on the Internet has sprung up in cases around the country. In Oregon, for instance, blogger Mark Bunster was denied admission to a closed-door city council executive session due to his alledged non-affiliation with an “institutional” news organization. His case prompted local city attorneys to look into the definition of “journalist.”

In California, an appeals court ruled in 2006 that online journalists are protected by the same shield law that applies to print journalists after Apple Computer sought to force online reporters to reveal their sources after employees leaked sensitive information.

The New York lawsuit will be an important case for independent journalists and bloggers to follow around the country.

“Siegel’s lawsuit argues that the current system of issuing press passes amounts to privileging those who work for large corporations,” writes a blogger named Oneshirt on the New York politics website, Room 8, Nov. 18. “As a result, in favoring corporate-employed reporters over citizen journalists and independent bloggers, the City’s press credentialing system effectively chooses to license primarily staid, cautious reporting — with a strong bent toward corporate coddling.”

HOW TO APPLY FOR NEW YORK CITY-ISSUED PRESS CREDENTIALS

If you’re a citizen journalist or blogger, you may want to consider applying for city-issued press credentials for access to events that are essential to your reporting.

Here’s how to go about applying for press credentials:

First, figure out which type of press credential you want or need. There are two basic categories for press credentials: a working press card, and a press identification card.

According to the NYPD application for press credentials, a working press card is “for those individuals who are full-time, news staff employees, whose routine duties require them to cross police and fire lines and are regularly involved in spot emergency news coverage, i.e.; shootings, fires, homicides, etc.” A press identification card is “issued to full-time members of the press who do not hold the Working Press Cards but do have a need for an official Police Department identification card in order to fulfill their various assignments,” like attending press conferences at City Hall.

As part of the application, the journalist has to submit three articles that have been published in print media within the last six months, as well as a cover letter from a news director or editor. The policy is unclear as it applies to bloggers or citizen journalists who work on online-only publications; some bloggers in the past have gotten press credentials, while others have been told that the NYPD does not issue credentials to online outlets.

Once you’re done preparing your application, make an appointment with the NYPD Office of the Deputy Commissioner, Public Information by calling 646-610-8802 (Monday-Friday between the hours of 9 AM and 5 PM).

Feel free to chronicle any pleasant or negative experiences in this process below in the comment section below.