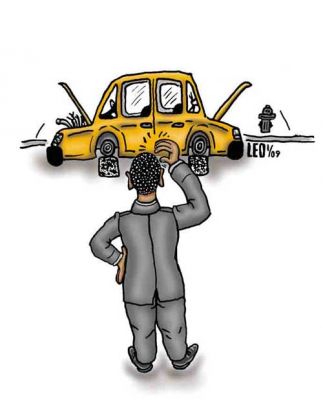 On Feb. 17, if GM reaches a deal with autoworkers to cut costs and bond holders to reduce debt, it will receive $4 billion more in bailout money. Around the same time, Congress will probably pass the largest civilian economic stimulus since the Great Depression. This will take place after Congress approves releasing another $350 billion installment to bail out failing banks. Also in February, incoming President Barack Obama has said he will initiate a “discussion around entitlements” as a central part of cutting government spending.

Taken together, these actions constitute the biggest government intervention into the economy since World War II and may define the legacy of a presidency that’s barely one month old.

Yet, so far, the political process has occurred with minimal public debate. That’s because the various parties — the banks and auto companies, the Federal Reserve, Congress and the Bush and Obama administrations — are loathe to have a debate.

Having a debate means discussing national economic priorities, what precisely is the “free market” and what is its relation to government regulation, oversight and management. Inconvenient questions would arise, such as why has the public been misled about the full cost of bailing out banks and automakers, and why should the public pay for companies’ stock market value many times over but not own them?

Open debate about the economy would mean looking at the contradiction between how the public is being forced to pay out trillions in private profit and private losses while being told they must compete in the market for healthcare, education, housing and food.

Obama’s stimulus plan may employ a few million people and help some particular industries, but it will not address the decline in wages and benefits during the last 35 years, which is the root of the economic crisis. That decline gave rise to debt-driven consumption that ended in the burst housing bubble. And this consumer crisis is matched by a similar crisis within capitalism: excess capacity and stagnating corporate profits, which led to the explosion in debt-financed speculation as a source of new profits.

The domestic automakers are failing because of overcapacity today (and poor business decisions from before). The Wall Street Journal estimates global overcapacity in the auto industry is as high as 20 million cars — far in excess of domestic U.S. sales of 13 million vehicles in 2008.

The free-market solution would be bankruptcy, allowing the Big Three to collapse and throwing the 240,000 auto workers they employ out of work. But the contagion would infect the entire supply chain: auto-parts suppliers, steel, rubber and glass makers, transportation, maintenance, repair, dealerships and foreign auto “transplants” that depend on the same supply chain.

This would lead to secondary business bankruptcies in Midwestern states where the auto industry is based and severe state and local government budget crises. And it would rob the country of an industrial base that could be manufacturing not just cars but mass transit systems, as well as researching and developing low-carbon fuels and advanced engine technologies.

Thus it makes sense to save domestic automakers, but this means retaining overcapacity — in fixed capital, plants and infrastructure, and labor — for years.

The full cost of salvaging the automakers is put at up to $125 billion by Mark Zandi, the chief economist of Moody’s economy.com. As of mid-January, GM’s market capitalization was $2.4 billion and Ford’s was $5.2 billion. Given privately owned Chrysler is in the worst shape, the market value of the three automakers is well under $10 billion. The public could then just buy the companies for less than the $13.4 billion doled out so far, fire the failed management and make the shareholders and bondholders assume most losses. (The market is supposed to be about assuming risks after all.)

Republicans want to pin Detroit’s woes on the United Auto Workers, but their wages and benefits account for less than 10 percent of the sticker price of a domestic automobile, according to the Harbour Report, a leading auto industry study. Forcing down auto workers pay would just exacerbate the decline in consumer demand that underlies the recession.

It’s not just the automakers that need to be bailed out; the whole industry needs restructuring from part-suppliers to carmakers to car dealers. This means having a clear plan for the nation’s economy.

The first principle should be the public owns what it pays for. Management could be outsourced and autoworkers given seats on the new boards. Targets could be set for wages and benefits, production levels, fuel efficiency and carbon emissions. The auto industry should be mandated to meet highmileage standards. To push consumers to buy fuel-efficient hybrids, a floating tax should be placed on oil to keep it above $100 a barrel.

A significant oil tax would have many other benefits, such as reducing greenhouse gases far more effectively than carbon cap-andtrade schemes in pollution permits (which the Obama administration favors so as to inflate another speculative financial bubble). An oil tax could spur a new alternative fuel and engine technologies, and it would reduce both the U.S. trade deficit and its imported oil habit.

To deal with retired autoworkers’ pensions, Congress should bolster the U.S. Pension Benefits Guaranty Corp., which has an $11 billion shortfall that would more than double if it had to take over the domestic automakers’ pensions. To deal with retirees’ healthcare costs, universal single-payer healthcare would result in huge savings for businesses and households alike by eliminating almost all profits and administrative and bureaucratic costs.

But it would be a monumental political battle to take on oil companies, the automakers, HMOs and drug companies, their allies in Congress, as well as the neoliberal ideologues with a roost in every corporate media outlet.

Instead, Obama has cast his lot with the super-rich, which is of little surprise given his ties to Wall Street and big corporations. His call to “discuss” entitlements — meaning slash Social Security and Medicare — is an attempt to make working Americans pay yet another time for the economic disaster.

Social Security can meet all its obligations until 2049 and is funded through the payroll tax. Talking about cutting Social Security indicates Obama wants the government to default on the $2.4 trillion in treasury bonds in the trust fund. Even if there was a need to default on government bonds, the pain should first be inflicted on the wealthy, foreign central banks and bailed-out corporations that hold these bonds. Similarly, any funding problems for Medicare (and Medicaid) could be eliminated clean with a universal single-payer plan.

This is why there is no honest debate. It would place tremendous pressure on wealthy individuals who made trillions of dollars off the speculative bubbles to pay. It would mean admitting that universal healthcare and education is easily achievable, which could lead to demands for housing and food security to be basic rights. This would imperil our pyramid-style economy, where wealth at the top is based on mass theft from below. And that’s the last thing the incoming Obama administration wants to discuss.