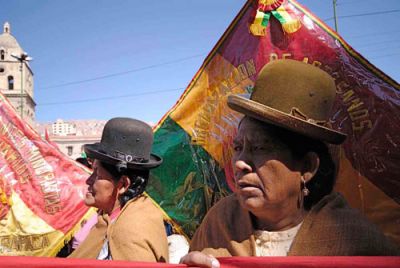 A PEOPLE ON THE MOVE: Hundreds of thousands of Bolivians rally La Paz to support a proposed constitution that would enshrine sweeping social reforms. A nationwide referendum on the new constitution will be held Jan. 25. PHOTO: FLICKR.COM/PHOTOS/GAFFERBEE

After months of street battles and political meetings, the Bolivian congress ratified a new draft of its constitution last Oct. 21. A national referendum on whether or not to make the document official is scheduled for Jan. 25.

“Now we have made history,” President Evo Morales told supporters in La Paz. “This process of change cannot be turned back. … Neoliberalism will never return to Bolivia.” If the constitution is approved in the January referendum, a new general election will take place in December 2009.

The upcoming referendum comes just days after another major event in the hemisphere: Barack Obama’s inauguration as U.S. president on Jan. 20. The proximity of these two events offering “change” is a great opportunity to reflect on what change has meant for many Bolivians under Morales, and the role of Bolivia’s social movements in moving the country in new directions.

Evo Morales, an indigenous former coca grower organizer, was elected president of Bolivia in December 2005 on a platform that included nationalizing gas reserves, redistributing land, re-writing the constitution and granting increased rights to disenfranchised indigenous groups around the country. In varying degrees, he followed through on many of these promises. The nationalized gas and oil industry has brought in $1.5 billion in revenue to the impoverished government, significant areas of unused land have been given to landless farmers, and indigenous rights are a key theme in the new constitution.

Leading up to the congress approval of the constitution and referendum plans in October, Morales participated in sections of a march of more than 100 miles from Caracollo in Oruro to La Paz that involved an estimated 100,000 union members, activists, students, farmers and miners. The march was intended to pressure opposition members of congress to back the constitution and referendum. When participants arrived in the capital they packed the city center in historic numbers. Some media outlets said the march, which stretched nine miles, was the longest ever in the capital. The lead-up in the streets to the congressional vote was characteristic of the way popular mobilizations have helped push through major political decisions and laws.

Nationwide mobilizations in 2003 paved the way for the partial nationalization of Bolivian gas reserves in 2006. In November 2006 changes to a land reform bill were passed thanks to massive pressure from landless farmers, unions and activists. And the rewritten constitution itself is in part the product of months of protests, strikes and heated discussions inside and outside the halls of the government.

Throughout Morales’ time in office, numerous rallies, marches and strikes have given the administration the ongoing mandate it needed to confront the Bolivian right wing. Activists in the United States who want to pressure the Obama administration for radical changes could learn a great deal from the Bolivian grassroot movements.

The road to this new constitution has been a long, complicated and often violent one. One key event was the July 2, 2006, election of a constituent assembly to rewrite the constitution. Later in December 2007, the new constitution was passed in an assembly meeting that opposition members boycotted. In many ways, these various steps will culminate in the Jan. 25 referendum.

Given Morales’ support across the country, the new constitution is expected to be passed. “The public support expressed for [Morales] … coming on top of the 67 percent vote of confidence he was given in the Aug. 10 recall referendum, make it clear that he is the most popular president in the last 26 years of democracy in Bolivia,” Franz Chavez reported in IPS News.

The draft constitution includes changes to allow the nationalization and redistribution of natural resources to benefit the majority of the country. It establishes the Bolivian state as plurinational, as to reflect the diversity of indigenous and Afro-Bolivian groups in the country. It formally promotes the official use of the country’s 36 indigenous languages. The new constitution also grants autonomy to indigenous groups across the nation, enabling them to govern their own communities.

Most of Bolivia’s fertile land is in the hands of a few wealthy landowners, and the revised constitution may fall short of the extensive land reform called for by Bolivian social movements. The new constitution puts a size limit only on land recently acquired or land considered by the government to be socially and economically productive. The cap — from 5,000 to 10,000 hectares — will be voted on later. Therefore, it’s possible that many of the enormous land holdings of the Bolivian elite, particularly in the eastern part of the country, won’t be redistributed under the current constitution.

In another concession to the opposition, the draft constitution was changed to prevent Morales from running for two additional terms, as an earlier draft of the constitution allowed. If the constitution is approved, Morales would run for his last consecutive term in general elections in December of 2009. This move indicates that the Movement Toward Socialism, Morales’ political party, may have plans to diversify its central leadership.

Morales commented on these changes in a speech in La Paz, “here we have new leaders who are rising up, new men and women leaders who are coming up like mushrooms to continue this process of change.”

It remains to be seen how social movements that are disenchanted with the new constitution — particularly on issues of land distribution and autonomy for states controlled by the right — will react. If recent events are any indication, significant hope lies in the potential of Bolivia’s grassroots to radicalize the Morales government.

Benjamin Dangl is the author of The Price of Fire: Resource Wars and Social Movements in Bolivia (AK Press.) He is the editor of towardfreedom.com, a progressive perspective on world events, and upsidedownworld.org, a website on activism and politics in Latin America.

BIRTH OF A NEW NATION

Bolivia’s social movements have been a driving force in that country’s transformation throughout the past eight years.

April 2000—The people of Cochabamba, a city of 900,000 in central Bolivia, launch a general strike and shut the city down to protest the privatization of the city’s water system by a pricegouging subsidiary of the U.S.-based Bechtel Corporation. Weeks of protest end when the Bolivian government announces that it will return the water system to public control.

September-October 2003—Nationwide demonstrations and road blockades bring the country to a standstill for a month to protest government plans to hand over Bolivia’s vast natural gas reserves to foreign investors. Army and police forces kill nearly 80 protesters before President Gonzalo Sanchez de Lozada is forced to flee the country when public opinion turns decisively against him.

June 2005—Sanchez de Losada’s successor Carlos Mena is forced to resign amid renewed protests calling for the full nationalization of Bolivia’s natural gas reserves. A new presidential election is set for later in the year.

December 2005—Evo Morales of the Movement Toward Socialism (MAS ) wins the presidency in an electoral landslide.

May 1, 2006—Morales partially nationalizes foreign oil and natural gas holdings and gains a substantial increase in royalties from foreign companies.

July 2006–December 2007—Bolivians vote for a constituent assembly, which proceeds to write a new constitution over the next 18 months.

August 2008—Morales wins 67 percent of the vote in a recall referendum initiated by his conservative foes.

October 2008—After months of protests led by labor, peasant and student organizations, Bolivia’s congress passes legislation allowing the new draft constitution to go to a popular vote in January 2009. 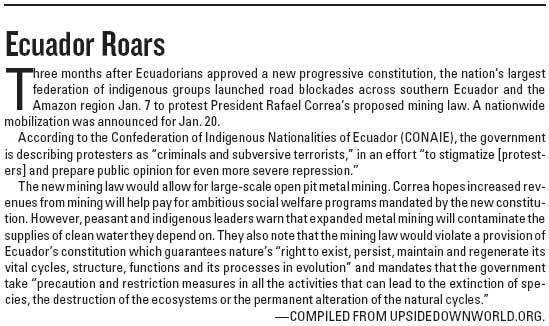