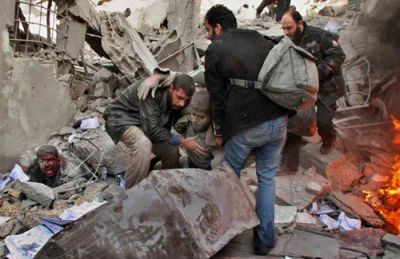 COLLATERAL DAMAGE: Rescue workers free a man as another pleads for help from underneath the rubble of a building destroyed by an Israeli air strike Dec. 28 in Gaza City, Gaza. PHOTO: AMIR FARSHAD EBRAHIMI

“EVERYTHING YOU CAN IMAGINE, WE DO NOT HAVE.”

Interview with Palestinian journalist Sameh A. Habeeb by Zahra Hankir of The Indypendent, Jan. 4

Zahra Hankir: What is the current humanitarian situation on the ground in Gaza?

Sameh A. Habeeb: If we counted the things that are missing and that we need, we would not finish [this interview]. There is no bread. There is no sugar. There is no gas. There is no fuel. There is no electricity, and there is no wood. There is no cement. Everything you can imagine, we do not have. And this was a problem that started with the blockade and that has accentuated since the attacks began. It was pre-planned. It is not only a matter of a rocket being fired here and there. It is a strategy that Israel has followed.

ZH: What has been the general attitude of Palestinians in Gaza toward Hamas?

SAH : The main concern for the Palestinian people now is how to find food, how to light candles, how to keep warm. They do not think much about politics. Generally, support for Hamas is still there, and the decisive battle would be proving whether Hamas will have support or not as it still did not [attack] “hot” areas.

ZH: What is your current living situation?

SAH: I live in Gaza City, two kilometers from the Israeli borders. Since the beginning of the blockade, which was imposed 20 months ago, and since the beginning of the war, my life has been turned upside down. There is no gas. No power. No Internet. I charge my laptop by going here and there to get Internet, but generally, there is no fuel, no gasoline, and no oil. In the humanitarian aspect, we do not have anything now. Today I wanted to go to the market to bring home some food. Thank God, I did not go; there was a massacre from artillery shells. Israelis hit the market — the busiest market in Gaza.

Imagine a life with no Internet. No power. No food. Confined to your house with no work. I spend a lot of time on my bed covering myself with blankets because it is so cold. There is no heating. I think. I think. I think.

ZH: How have you managed to carry on work as a journalist, balancing demands of the job while keeping yourself and your family safe?

SAH: It is too hazardous to go out whenever I want to. I sometimes go out to take photos, but I’m generally scared to go out because they [the Israelis] restrict all kinds of journalism.

As for the things I do, I have my laptop that I charge from time to time. I visit friends who have power in other areas. I sometimes go some kilometers away to get power.

I charge the laptop and then I call friends to get their news. I have sources in various areas. I call doctors to learn of what is happening in the hospitals. I listen to the radio stations. I have an amalgam of sources, really. And I make sure to write and report them at the end of the day.

Sameh A. Habeeb writes for gazatoday.blogspot.com. For the full interview, see indypendent.org/2009/01/05/habeeb-interview.

“WE ARE FOUR AMBULANCES OUT TONIGHT”

In the haze of dust and smoke from the latest F-16 strike, a family evacuates its home. The dispatcher at the Jabaliya Palestine Red Crescent Society (PRCS) receives call after call from terrified residents fleeing their homes. It’s a new year, a new Nakba, and an old scene; Israel is bombarding Gaza once again and the world is standing idly by.

We are four ambulances out tonight, versus two last night. The ambulances weave nimbly along blacked-out streets of a manufactured ghost town — like the streets all over Gaza — dodging fresh piles of rubble.

It’s absolutely impossible, unbelievable, it’s a massacre. “They know no limits now,” the medics report. “They are going crazy.”

We pass shells of houses, mosques, schools and shops and see streams of panicked residents fleeing for their lives. Many more began to flee this morning after yet another night of bombardment on and around their houses.

This morning when Israeli planes dropped the flyers announcing their intention to bomb the northern regions in collective punishment, residents believed it. The lights in Jabaliya’s PRCS stations are out, the power has just cut off. In the dark and cold, the sounds of explosions outside are more pronounced.

Acrid smoke from the shelling poisons the air. The feeling of being utterly surrounded by war planes, tanks, bulldozers and warships increases as news comes of the latest attack around Gaza: an orphanage in Gaza City, near the Palestine Mosque, with whispers that the holy place is next, marking at least ten mosques destroyed. The number of dead and injured from the attack on the Ibrahim al-Makadma Mosque today is 11 and 50 respectively, and rising.

A longer version of this article originally appeared on electronicintifada.net. Eva Bartlett is a Canadian human rights advocate who spent eight months in 2007 living in West Bank communities and four months in Cairo and at the Rafah crossing. She has been in Gaza since November.

“THIS CONFLICT IS ONE OF EXISTENCE”

My family is from Karatiya village, a few kilometers away from the Gaza Strip in what is now called Israel. Karatiya is one of the 450 towns in historical Palestine that were cleansed by Zionist militias in 1948, displacing my family along with hundreds of thousands of other Palestinians.

I now live in Maghazi refugee camp in the Gaza Strip, which is currently being bombarded by Israel from tanks along the border, American-manufactured F-16s in the sky, and from the sea. Last night Israeli forces invaded the Gaza Strip and heavy fighting is happening in the northern strip and east of Gaza City.

I have just come back to my computer that I’m using when there is electricity. There are electricity cuts here that are very prolonged throughout the day. I manage to use a power generator for my computer when the electricity is out but the generator needs fuel, which is scarce here in Gaza because Israel has closed the border and everything is locked down right now. Shortly I will run out of fuel to run the generator and stay online; this will be devastating because I am a journalist.

… Earlier today I went out into the neighborhood to try to get something from the shop and to talk with some neighbors — really that’s what all people in Gaza are trying to do right now. The main roads in Gaza are almost totally devoid of cars and people. People are staying near their houses and leaving only in the case of an emergency.

I found that my neighbors are dealing very patiently with what is happening right now. They don’t have any place to go and are staying close to their homes, expecting that the worse has yet to come. However, they are saying that they will remain steadfast in their homeland and neighborhood and homes, even if Israel destroys Gaza completely. These people have been refugees for six decades and this conflict is one of existence — the Israelis don’t want the Palestinians to exist and hope they will go to Egypt and Jordan. Refugees recognize this, and they are remaining steadfast in their homeland.

A longer version of this article originally appeared on electronicintifada.net.