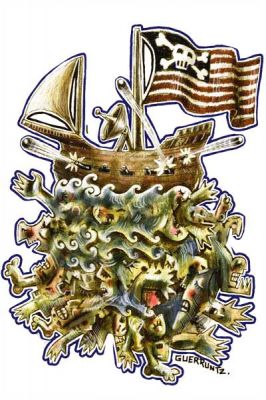 Somalia’s status as the global epicenter of piracy seemed verified when, on Jan. 9, the U.S. Navy released a photo of a container, apparently holding some $3 million in ransom money, being parachuted onto a hijacked Saudi supertanker full of crude oil in East African waters.

The ship was one of 42 vessels captured last year off Somalia’s coast by modernday pirates who have traded spyglasses for GPS technology and treasure chests for international wire transfers. Observers attribute the proliferation of seafaring bandits to the onshore strife in Somalia, which has lacked a functioning central government since 1991.

“Piracy is a problem that starts on the shore,” said U.S. Navy Cmdr. Jane Campbell of the Bahrain-based Fifth Fleet to reporters. “The international community needs to address the situation on the ground in Somalia.”

What Campbell neglected to mention is that the anarchy in Somalia has U.S. fingerprints all over it. Somalia is one of the most underreported fronts in the outgoing Bush administration’s “global war on terror,” and piracy is one of its unintended consequences.

While blowback in the Horn of Africa may be occurring on the high seas, its origins are to be found inland. In December 2006, the United States provided diplomatic cover and military training for an Ethiopian invasion force that ousted the Islamic movement known as the Islamic Courts Union (ICU), which had come to administer the capital and much of the south of the country.

Two years on, the invasion and ensuing war has not only failed to secure U.S. and Ethiopian interests, it has resulted in a humanitarian disaster. Now Ethiopia is pulling out its troops, the U.S. and Ethiopian-backed Transitional Federal Government is near collapse, and President Abdullahi Yusuf, a longtime ally of Ethiopia, has resigned.

On the brink of controlling Somalia are the Islamist and anti-occupation Al Shabaab movement (“Party of the Youth”). More radical than the ICU, which was credited by many Somalis with restoring basic services and security, the Al Shabaab movement has been designated a terrorist organization by the U.S. State Department.

In this lawless environment, piracy has flourished. While the media have fixated on the threat to commercial shipping in the Gulf of Aden, they have largely ignored other types of pirates that are plundering and despoiling Somalia’s waters.

With a 2,000-mile coastline, the longest on the African continent, Somalia is unable to stop the “700 foreign-owned vessels that are fully engaged in unlicensed fishing” in its waters, according to the U.N. Food and Agriculture Organization. Additionally, states the U.N. outfit, “there is also strong suspicion of illegal dumping of industrial and nuclear wastes along the Somali coast.”

Some Somali pirates claim they are acting as “coast guards” to protect Somalia’s waters from illegal fishing and waste dumping. In fact, a number of fishing vessels seized and ransomed have been from countries that are implicated in the illegal fishing, such as Spain.

In turn, the lack of security has become a business opportunity, as a dozen mercenary companies are providing security to commercial shippers, according to Bloomberg News.

Some nations may even prefer that mercenaries handle the pirates, rather than negotiating security agreements that would demand a higher level of transparency. “Some of the countries most active in theanti-piracy attempts are also countries with large economic interests in Somali waters,” says Gustavo Carvalho, a researcher with the London-based Global Witness who estimates that $300 million worth of fish are poached from Somali waters each year.

The International Committee of the Red Cross calls the current situation in Somalia “catastrophic.” At least 10,000 civilians have been killed in two years of fighting. The United Nations says that up to 3.5 million people, or nearly half the country’s population, will soon need food aid to avoid starvation. And up to a million and a half people have been made internal refugees, living in sprawling tent cities outside of Mogadishu.

The capital itself is largely destroyed and abandoned. Amnesty International and Human Rights Watch have documented extensive war crimes committed by Ethiopian troops, soldiers loyal to the Transitional Federal Government and Islamic rebels. And without the estimated $1 billion Somalis working abroad send back annually, the cash economy would probably collapse.

“Everybody is so concentrated on piracy on the water, but it’s totally overshadowing the humanitarian disaster on the land,” says Sadia Ali Aden, co-founder of the Somali Diaspora Network. “Under the cloud of piracy, Ethiopian troops are still in Somalia, killing with impunity.”

Piracy largely came to a halt in 2006 when the Islamic Courts Union administered much of Somalia. Michael Shank, a senior analyst for Foreign Policy in Focus, writes that after the ICU took power in 2006, “the airport opened after 11 years of closure, shipping ports and seaports were secured to ensure safe transport of food and products, law and order returned to Mogadishu, education and health care remained a top priority, environmental regulations were instituted … and crime diminished significantly.”

The ICU was supported by a Somali business community weary of the checkpoints and shakedowns carried out by warlords, many of whom were on the CIA payroll. After highly publicized — but unsubstantiated — accusations against the ICU, including alleged ties to Al Qaeda members linked to the 1998 U.S. Embassy bombings in Kenya and Tanzania, Ethiopia invaded on Christmas Eve, 2006. U.S. backing was reportedly extensive and included training exercises held with the Ethiopian army at Camp Lemonier in neighboring Djibouti.

For the United States, this is a war fought on the cheap, largely through Ethiopia, CIA-funded warlords and the occasional missile strike on “suspected terrorists.” After one U.S. strike in May 2008 killed a well-known Islamist militia leader, as well as up to a dozen civilians, retaliatory attacks were levied against African Union peacekeeping troops, further destabilizing the country just before U.N.-sponsored peace talks were to begin.

“Everybody is fascinated with the piracy, but these are not the Robin Hoods of the sea,” says Hassan Warsame, co-founder at the Somali Diaspora Network. “They’re not taking these millions and giving them to the poor of Mogadishu. A lot of these guys were involved in other forms of crime before,” Warsame claims.

According to the Independent (U.K.), the original pirates were Somali fishermen who took to “speedboats to try to dissuade the dumpers and trawlers, or at least levy a ‘tax’ on them.”

“There are reports from villagers of a wide range of medical problems like mouth bleeds, abdominal hemorrhages, unusual skin disorders and breathing difficulties,” said Nick Nuttall, a spokesman for the United Nations Environment Program, to Voice of America.

In December 2004, the deadly Boxing Day tsunami washed hundreds of broken barrels of radioactive waste onto Somali shores, leading to more than 300 deaths.

Amid the chaos, mercenary companies like Blackwater Worldwide and Mississippibased Hollowpoint are looking to make some loot. Peter Singer, author of Corporate Warriors, recently referred to Africa as “a potential growth market” for mercenaries. The U.S. Navy concurred. A spokesperson for the Fifth Fleet called the arrival of private military contractors to the region, “a great trend.” But not everyone agrees.

“People forget the history of private military contractors, that it was actually in Africa where they first got really big — during apartheid and South Africa’s proxy wars in Angola and Mozambique,” says Roxanne Lawson, Africa Policy Director for the Washington, D.C.-based TransAfrica Forum, a human rights and policy organization. The contractors, says Lawson, “know the American public is suffering from invasion fatigue. So the question is what’s the next big market? Is it proxy wars? Or is it battling pirates?”

Hardly a bastion of democracy, Ethiopia has close ties to Washington and secures hundreds of millions in U.S. aid every year, much of it military. In 2005, hundreds of Ethiopian civilians were gunned down by government troops in the capital of Addis Ababa following protests around a suspect election that kept Prime Minister Meles Zenawi’s party in power. And Human Rights Watch has documented many recent cases in which Ethiopian troops have engaged in executions, massacres, rape and torture, as well as burning entire villages in the Ogaden, a region with an active separatist movement that borders Somalia.

When Ethiopian tanks entered Mogadishu in December 2006, many of the warlords ousted by the ICU, some of the same men involved in the fighting against U.S. marines in 1993, returned. Those allegedly responsible for the Kenya bombings have never been apprehended. As Ethiopian troops now depart, those who will likely take power in Somalia are much more radical than their elders in the ICU who were targeted by U.S. missiles, or kidnapped and sent to Ethiopian jails.

Perhaps it takes a vast new economy of banditry on the high seas to call attention to the fact that U.S. foreign policy towards Somalia is yet another example of the failure of a never-ending “war on terror.” Whether the new administration takes a different approach is an open question.