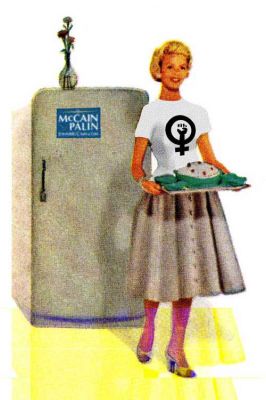 From the podium at the Christian Right’s Values Voter Summit in mid-September, Kate O’Beirne of the National Review Institute pronounced that the “selection of Sarah Palin [as the GOP vice presidential nominee] sounded the death knell of modern American feminism.”

“She’s a prick to the liberal establishment, to the feminists and to the men who fear them,” she jeered.

But as “Palin Power” surged through the halls of the Hilton Washington that day and through the Republican Party base in later weeks, her vice-presidential candidacy revealed a generational cleavage that conservative elders may not have expected. Because even as older conservatives decried anything feminist, many younger activists in the hall were supportive of Sarah Palin’s “free-market” feminism.

Sarah Palin is by no means a liberal feminist. She has expressed off-again, on-again support for talking about condoms during sex education, shown ambivalence about benefiting from Title IX, which bans sex discrimination in educational institutions, and is associated with the group Feminists for Life. But Palin gave viable political form to a free-market feminism that until now was largely championed by a few intellectuals and pundits based in conservative beltway think-tanks. As the GOP regroups in the Obama era, it may find this feminism useful as it softens the culture war crusade that is so off-putting to moderate Republicans and independents alike.

“For such a long time, the powerful women in Washington were all touting pro-choice as pro-woman. People like Sen. Hillary Clinton and House Speaker Nancy Pelosi were the role models,” says Emily Buchanan, the young executive director of the Susan B. Anthony List, which seeks to elect “pro-life” women to office. “[Palin] embodies the American woman. She’s independent. She speaks her mind. But she also embodies the traditional values that are so important to Americans.”

Another staffer, Justin Aguila, 23, said “There’s a great picture of her with her son in a sling signing a law,” adding, “My mother is not usually involved in the political process and now she is.”

Buchanan agreed, “She’s paved the way for traditional women in office. I hope we see our mothers running for office; that they see the connection starting at the community level.”

To them, Palin’s attraction is that she is “normal,” a word heard as often in interviews as “traditional.” She wears makeup. She is pretty. She is an evangelical Christian. She is anti-abortion. She is also white.

Palin’s campaign reveals a surprising transition in what conservative Christians (including both evangelicals and Roman Catholics) mean by traditional woman: not a stay-at-home mom but someone who believes in a heterosexual nuclear family and conservative “family values.” By contrast, “biblical womanhood” is the phrase used by neo-Calvinists and others to describe submissive stay-at-home moms who are expected to ask their husbands how they should vote. During the election, champions of biblical womanhood such as Doug Phillips of the home-schooling ministry Vision Forum opposed Palin’s candidacy on the grounds that God did not mean for women to lord over men or depart from being “keepers of the home.” Phillips called Palin’s selection “the single most dangerous event in the conscience of the Christian community in the last 10 years.”

Redefining the traditional to embrace egalitarian working moms builds on larger shifts seen among evangelicals. As W. Bradford Wilcox argues, white evangelical Protestants typically talk right but go left: they want “traditional” families while having the same messy family lives as everyone else, including one of the highest rates of divorce in the country.. Evangelicals share the economic challenges facing the rest of the country, where two-income families are a necessity.

Powerful “traditional” women balancing work and domesticity are no big deal, says Joy Yearout, Susan B. Anthony List’s legislative and political director. Yearout explains the continued enthusiasm for Palin following the Republicans’ defeat. “She doesn’t see gender as something that is victimizing. She doesn’t see it as a barrier.”

This suggestion that progressive feminists peddle victimology is a popular position on the right, particularly with the free-market feminists at the Independent Women’s Forum (IWF). The IWF staff do not all identify as feminists, although director Michelle Bernard does so and states there can be such a thing as a “limited-government” or “red-state” feminist.

IWF says it offers a feminist alternative to the progressives at National Organization for Women who exaggerate their victimhood to support big government policies.

IWF champions “limited government, equality under the law, property rights, free markets, strong families, and a powerful and effective national defense and foreign policy.” It promotes school choice, conservative women’s groups on campuses and women’s issues in the Muslim world. And while O’Beirne, an emerita IWF board member, trashes feminists in general (while saying she always supported equal opportunity in the workplace), others on the right criticize the group for continuing to identify with the women’s movement at all. Maybe that’s why its staff so vigorously attacks liberal feminists.

“We are in the midst of third-wave feminism,” argues IWF Director Bernard. “Young women look at it very differently than Gloria Steinem. Feminism was about women’s right to choose the way they want to live.” “Equity” or free-market feminists like Christina Hoff Sommers of the American Enterprise Institute support women’s equal capacity to men and their right to be treated equally in the workplace and schools, while opposing affirmative action, family-leave laws and other government programs to ensure that this equal treatment happens. Like other conservatives, they see it as up to the individual to compete in the market, no matter what background or resources they bring to bear.

The free market feminism of Bernard, Sommers and some conservative Christians is part of a lineage of right-wing feminism that goes back to the post-suffrage National Woman’s Party, which became the home of more privileged women who supported a free market and were vigorously anticommunist.

Such women are entangled in class politics. For them, feminism does not lead to support grander claims for economic justice.

The Sarah Palin phenomenon seems to be enlarging the small crew of free-market feminists. Equal “rules of the game” not substantive equality is the goal.

Their economic vision is in line with both the Heritage Foundation and the Christian Right’s Family Research Council in explicitly promoting a free market and “small government” ideology. For free-market Christians, it is important to shrink the government and institute reforms like creating a system of school vouchers so parents can use the money to pay for Christian schools.

This is a position pushed by the new generation of conservative Christian women politicians like Rep. Michelle Bachmann (R-Minn.) and Sarah Palin. Both received their political training as conservative prolife evangelicals, balancing a demanding public life with a large family and merging their family values ideology with market-friendly analysis.

Where this new energy takes them is anyone’s guess. But with red states lagging in the number of women in elected office, and the GOP’s white male complexion now recognized as a problem by some of those white men hoping to win back national power, the free-market feminists might find some support from the top of their party in the coming months.

Abby Scher is a sociologist and editor of The Public Eye. A longer version of this article with footnotes is available at www.publiceye.org.