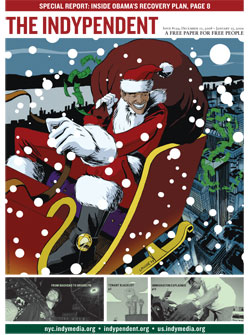 Most of the Hispanics who reside in the United States came here because our economic policies made it difficult or impossible for them to make a living in their own countries. Our agribusiness corporations receive massive subsidies that allow them to undercut the prices of peasants all over the world. There is more to it than just subsidies, but that’s the explanation that does not require a degree in economics. Those people were starving to death in their own countries due to our policies. The supposed hundreds of millions are not actually sent to Mexico. Most of what we give them is structured so that the money goes directly to a U. S. corporation. The U.S. corporation then takes care of the necessary gratuities.
—GM Pierce

WAITING FOR OBAMA
Responses to “Obamanomics: Why the Stimulus Plan Will Not Revive the Economy,” Dec. 12:

Let’s all reserve judgment until we start to see what Obama does. He hasn’t even taken office yet and the same people who were yelling so vociferously for his candidacy are now vehemently demanding something other than the platform he ran on. Obama has said that his current strategy about how best to fix the economy is to invest in the U.S. infrastructure and green technology. More investment into such projects means more blue-collar jobs, which means more bluecollar spending and more service jobs to cater to these blue-collar workers.
—Ari

The only thing that has ever combated corporate interests is grassroots work, usually in the form of protest involving mostly women — who have a much larger hand in the progressive shaping of the world at large than is usually portrayed — and not in the “great leader” of history theory to which so many of us tend to subscribe. Franklin Delano Roosevelt was driven by corporate interests just as Obama is. The difference was that in the 1930s there was a vast and vibrant Left, including communists, socialists and anarchists for whom, in this day and age, most people (I mean regular working people) show such visceral and uncritical disdain.
—Obamanomics

SUPPORTING WOMEN IN THE PRIESTHOOD
Response to “Female Priests Altar the Rules,” Dec. 12:

I attended the recent RCWP ordination in Chicago and listened to Bishop Dana Reynolds’ homily with interest. Her strong message of reaching out to all the disenfranchised, the poor seemed to be in the best tradition of the Gospels. At Call To Action I attended the session where five women priests told about their ministries. I found it impressive and hopeful. I have over the years worked with women clergy — mostly Episcopal and Lutheran — and found them to be well educated and dedicated. The stubborn refusal of our own hierarchy to even seriously debate the ordination of women and their willingness to deprive the Catholic Christian community of the Eucharist in order to maintain male power seems very contrary to the Lord we serve.
—Rev. Dcn. Art Donart

If all of us do nothing but watch, nothing will change. Raise heck over whatever isn’t right, never give up and force a change. Too many politicians are owned by big business. Throw them out and start on it now!
—Kevin5