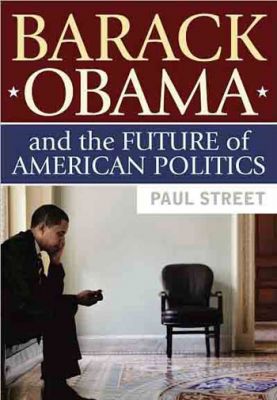 Barack Obama and the Future of American Politics
By Paul Street
Paradigm Publishers, 2009

The Democratic Party’s progressive base has been repeatedly disappointed in recent decades by the triangulating, pro-corporate tilt of the party’s Washington-based establishment. Will things be different this time under President Barack Obama?

Not likely, says political analyst Paul Street in Barack Obama and the Future of American Politics, a reality based examination of Obama’s rise to prominence. This book should be of interest to anyone looking for a deeper understanding of how Obama got where he is and what sort of “change” he has in mind.

Street watched Obama’s ascent from up close — first as a researcher and policy analyst at the Chicago Urban League and later in Iowa as a volunteer for John Edwards’ campaign in the run-up to that state’s all-important presidential caucuses. His book lacks the insider access that informs many political biographies, but more than makes up for that with a relentless focus on the issues.

Street doesn’t dwell on Bill Ayers, Rev. Jeremiah Wright, “bittergate,” unworn flag pins and the many other distractions that passed for media coverage during the presidential campaign.

Instead, Street draws from both Obama’s public statements and press coverage and frames it within an anti-corporate critique of the socio-economic and political forces that drove Obama’s candidacy. In doing so, he peels away Obama’s vague rhetoric to connect the dots. The portrait that emerges is one of a nimble, well-marketed politician who is able to inspire progressives while reassuring economic and political elites.

One of the most revealing parts of the book is Street’s recounting of the “political and business class tryout” that began for Obama in the fall of 2003. Gearing up to run for an open U.S. Senate seat representing Illinois, Obama quickly dazzled key players from the Democratic Party’s financial, legal and lobbyist sectors with his charm, his Harvard Law Review credentials and his “reasonableness” on the issues.

This audition would continue once Obama arrived in Congress. Eager to prove his probusiness credentials to potential big-money donors, Sen. Obama voted in favor of punitive bankruptcy legislation and Republican-led efforts to remove class-action lawsuits from state courts. He also demonstrated his “seriousness” on national security issues by embracing Connecticut’s blowhard senator Joseph Lieberman as a “mentor” and campaigning for him in 2006 when he faced a tough primary challenge from the antiwar left.

The longest chapter in the book looks at Obama’s careful dance with race. For Street, Obama is the black politician white America has been waiting for — charismatic but never angry, conciliatory not polarizing. His tacit arrangement with white voters — he refuses to talk about the structural racism that is still prevalent in American society while they will overlook his blackness — could end being quite costly for many African-Americans.

Despite all evidence to the contrary, many on the left cling to the belief that Obama is one of them. He is cleverly waiting for the right moment to show his true commitments, the argument goes. Taking aim at this mentality, Street reminds readers to look at politicians like Obama in a structural context:

“Many, if not most, of those candidates and officials … have likely internalized the authoritarian values of corporation capitalism, socioeconomic equality, U.S. nationalism and imperial globalism. The deeper point, however, is that it might not matter what sort of internal values they may or may not hold, since they are trying to succeed within a political culture and system that tends to mitigate against progressive commitments.”

In the end, Street’s story of Obama is one of the tension between the promise of democracy and the harsh realities of class rule. If Street’s take on Obama is unsympathetic, his real target is the corporate-dominated political system that requires all “serious” presidential aspirants to operate within narrow ideological parameters that take progressive concerns off the table. Instead, Street argues, we are treated to an electoral spectacle every four years that is not worthy of the trust people put in it.

If this all sounds too depressing, Street also posits reasons to not just be relieved that the Republicans have been removed from power but hopeful about what may come next. Obama, after all, is an astute politician and will move as the political climate changes. He won’t do the left’s work for it. But if the millions of people he inspired to care about politics continue to organize and push from the grassroots, new possibilities will open up.

As Street notes near the end of the book, “Democracy’s true source lies not in candidates and officeholders but in aroused and organized citizens who promote, push and punish politicians and public officials. Obama, a militant ‘realist’ and master of the ‘winnable,’ is no magical exception.”