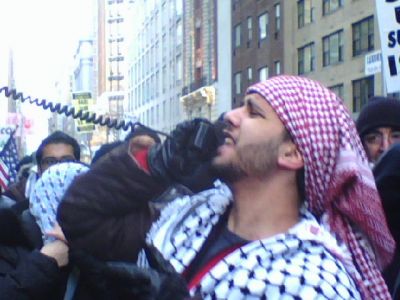 Anger and anguish were expressed as thousands of people rallied at Times Square Sunday afternoon, calling for an immediate end to the Israeli attack on the Gaza Strip, which has entered its third week, and an end to U.S. support for Israel.

The rally and march to the Time Warner building near Columbus Circle was organized by the Break the Siege on Gaza Coalition-NY, which includes a number of local pro-Palestinian organizations.  Time Warner was targeted because the demonstrators say that CNN and other media outlets are not showing the truth about Gaza.

“There is no gas, no food, no electricity over there [in the Gaza Strip].  A lot of people are dying…We should stop all of this,” said Jamal Mick, a Palestinian originally from the West Bank city of Ramallah.  He said he had friends in Palestine who had died as a result of the recent Israeli incursion.

At the end of the demonstration, skirmishes broke out between NYPD officers and protesters, and pepper spray was used on some demonstrators.  Two people could be seen being led away in handcuffs.  It was unclear what led to the skirmish and subsequent use of pepper spray.  After the rally ended, a Palestinian youth-led breakaway march started, resulting in an hour long game of cat and mouse between about 15 police officers on scooters and the group of about a hundred or so youth.  At one point, the group of Palestinian-Americans gathered in a circle, with one person leading chants of “Gaza, Gaza, don’t you cry, Palestine will never die!” and yells of “Allahu Akbar” (God is Great).

As the small group of pro-Palestine protesters zigged and zagged through the streets of the Theater District, a police officer who had previously been seen pushing some of the young demonstrators threatened to get his scooter and “run them over.”  Eventually, the cat and mouse game ended with most of the breakaway marchers running into a subway station.

Chanting “Free, Free Palestine!” and “From the River to the Sea, Palestine will be free,” demonstrators spanned at least 3 city blocks listening to the slew of speeches through loudspeakers.

“As a Latina, I condemn what is going on in Palestine,” said Teresa Gutierrez of the May 1 Coalition for Worker and Immigrant Rights.  “Resistance is the only solution…Palestine will be free, Gaza will be free.”  Gutierrez praised Hugo Chavez of Venezuela, who recently expelled the Israeli ambassador to Venezuela in protest and referred to the war on Gaza as a “holocaust.”

A diverse group attended the rally, which started at 1 PM, although Palestinian and Arab-Americans were clearly in the majority.  Many people wrapped themselves in Palestinian flags and wore kaffiyehs, a symbol of Palestinian nationalism.  It was the latest in a series of protests in New York City that has brought tens of thousands of people into the streets to speak out against the continuing Israeli air, naval and ground bombardments.  The death toll is now close to 900 people, with almost 4,000 Gazans wounded in a war zone that is undergoing a severe humanitarian crisis.

At one point during the march to the Time Warner building, people started to chant, “Hey, Obama, we want change in Gaza.”  The incoming Obama administration was clearly on the protesters’ minds as they looked ahead to the swearing in of the new president.

President-elect Obama has only tepidly commented on the situation in the Gaza Strip, repeating the mantra that “there is only one president at a time.”  In his only substantive remarks on the war on Gaza, Obama said, “the loss of civilian life in Gaza and in Israel is a source of deep concern for me.”

Jewish demonstrators made it clear that Israel did not speak for them.  One women, Judith Ackerman, held up a sign that read, “Jews for Peace,” with a Star of David and peace sign on it.  “This killing is absolutely Nazi-like…I wear this sign to show people that there is a difference between Israelis and Zionists and Jews,” Ackerman said.

A contingent of Anti-Zionist Orthodox Jews was in attendance.  “We want the world to know that Zionism is stealing the identity of the Torah and of the Jewish people,” Rabbi Yisroel Weiss of the Neturei Karta movement said.

A much smaller pro-Israel counter-demonstration was held across the street from the pro-Palestine demonstration.

“I’m here for the children, the women, and for the men who could not feed their kids in Palestine and in Gaza,” said Angie Abu-Alam, an Egyptian-American demonstrator.

UPDATE:  Mainstream media outlets are reporting that police officers were injured at the rally.  The New York Times reports:

“Seven police officers were injured during a scuffle between pro-Israeli and pro-Palestinian protesters in Manhattan on Sunday, the police said.

“In a statement, the NYPD said the officers were injured when trying to break up a fight between two demonstrators.

‘While attempting to separate the males, several others joined in and began to assault the officers,’ the statement said…”