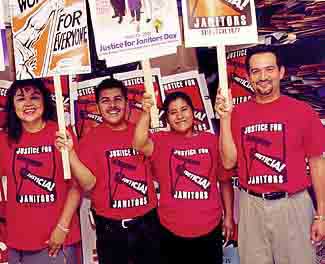 THE UNION MAKES US STRONG: Organizers with the Justice for Janitors campaign in Los Angeles. According to one study, 53 percent of U.S. workers would like to join a union. However, 79 percent believe they could be fired for doing so. PHOTO: leadershipforchange.org

After pouring at least $300 million into supporting Democratic candidates for the White House and Congress last year, labor unions are hoping that the new president will help enact their number one legislative priority: The Employee Free Choice Act (EFCA).

The act would allow workers to become officially unionized when more than half of the employees at a work-site sign union authorization cards. Once recognition is certified, the employer would be required to begin contract negotiations and reach an agreement within 120 days. Otherwise, a government-appointed arbitrator could impose an agreement — a mechanism that already exists in public sector bargaining.

The EFCA is an attempt to address the near impossibility of unionizing private-sector workers these days.

To create momentum for the act, labor advocates are trying to link it to Obama’s proposed stimulus package. They contend EFCA could give a significant boost to the national economy by lining workers’ pockets with higher wages and by providing greater job security.

Unionized blue-collar workers earn on average $18.88 per hour while their non-union counterparts garner $12.95 on average, according to the Bureau of Labor Statistics. Unionized service employees earn $16.22 per hour, almost double non-union service workers.

Many economists say the current economic crisis has its roots in the decades-long decline in wages in the United States, which supports the argument for pushing for higher wages (and better benefits).

Writing in Monthly Review December 2008, economists John Bellamy Foster and Fred Magdoff state “that real wages of private non-agricultural workers in the United States (in 1982 dollars) peaked in 1972 at $8.99 per hour, and by 2006 had fallen to $8.24 … despite the enormous growth in productivity and profits over the past few decades.”

Passing the EFCA will be difficult battle, however.

“Union supporters are portraying the act as part of the economic stimulus package,” said labor writer Steve Early. Early thinks Senate support for EFCA is close to the filibuster- proof 60 votes, but prominent Democrats are waffling on support. Labor needs to make it part of the economic package or the act “will run the risk of being pigeonholed” as a payback to a special interest that elected Democrats, Early said.

Big business is trying to paint EFCA as the end of the world and spent $50 million during the 2008 election cycle to defeat pro-EFCA candidates. Critics of EFCA, including 1972 Democratic Party presidential nominee George Mc- Govern, denounce EFCA for allegedly curtailing employee free choice by taking away the secret ballot election.

The 1935 Wagner Act allowed the National Labor Relations Board (NLRB ) to certify unionization efforts by either secret ballot elections or card checks. In 1947, the pro-business Taft-Hartley Act ended card checks after union membership grew to about 35 percent of the workforce. A little more than 12 percent of the workforce is currently unionized, and only 7.5 of private-sector workers were union members as of the end of 2007.

“EFCA would give unions the option to have federal arbitrators write the terms of a binding contract, setting wages, benefits, hours, work rules, and all other terms of employment if negotiations between the employer and union fail,” wrote Home Depot co-founder Bernard Marcus in Business Week. “… I’m also opposed to the dishonesty of some EFCA supporters who claim that worker coercion by employers in union elections is ‘the norm.’”

Currently, workers seeking to unionize must sign-up at least 30 percent of their coworkers on union authorization cards to participate in a NLRB-supervised elections that often are fraught with employer delays and coercion.

“That period of time before the vote and filing [for the election] with the NLRB is full of captive audience meetings that play to fear,” said Cindy Harrity, Communication Workers of America Local 1298 organizer. Harrity added that, in a recent campaign at a Connecticut cable company, her union filed for an election where more than 70 percent of the workforce signed union authorization cards, but lost by two votes because of employer coercion.

The Human Rights Watch report, “Unfair Advantages,” found that during union authorization elections, employers direct anti-union campaigns that often include compulsory meetings where workers are forced to listen to anti-union rhetoric and are threatened with workplace closings. The report also concluded that the NLRB ’s enforcement mechanisms fail to dissuade employers from routinely violating labor laws.