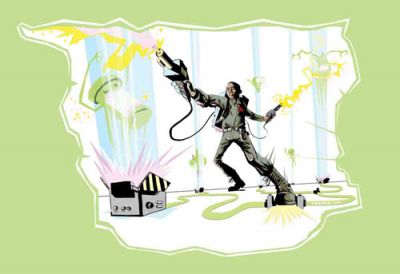 Expectations for Barack Obama’s presidency have continued to soar since his historic election. Millions believe change is possible. But what kind of change? And to whose benefit?

Our country and our world are in crisis, and the tepid, incremental reforms Obama has been emphasizing aren’t going to cut it. It’s time to think outside the box.

OBAMA’S PLAN: Provide subsidies and tax credits so people can afford insurance from the private sector or from a new public plan. The government, like some employers do now, would pay a portion of the premium. Obama wants to fund it by repealing the Bush tax cuts for those making more than $250,000 annually. Large employers that do not offer “meaningful” coverage to employees would be penalized, with the funds going to subsidize individual insurance policies. The plan would require insurance companies to accept everyone, regardless of pre-existing medical conditions. Additionally, Obama’s plan would try to reduce administrative costs and establish mandatory universal children’s healthcare.
PITFALLS: Even with subsidies, many people will be unable to afford healthcare coverage. “Meaningful” coverage is poorly defined and insurance companies would fiercely resist requirements to accept all customers because it would cut into their profits. Obama is trying to reduce costs for the individual without confronting the for-profit model, which is the primary factor in spiraling healthcare costs.
WHAT WE NEED: Medicare for all! Established in the 1960s, this single-payer program provides affordable medical coverage for all of the 40 million senior citizens in the United States and has far less overhead than private insurance programs. Taxes would have to be increased to bring everyone into Medicare, but most people’s healthcare costs would go down while the quality of care would increase. Complex schemes, such as Obama’s, are engineered to allow insurance and pharmaceutical companies to keep sucking up vast profits.
TAKING ACTION: Healthcare Now!, a coalition of dozens of progressive groups with chapters in over 300 cities, is the main force behind H.R. 676, which would establish a universal, single-payer healthcare system. H.R. 676 currently has 90 co-sponsors in the U.S. House of Representatives. For more information, go to healthcare-now.org.

OBAMA’S PLAN: Obama has called for a phased withdrawal of all U.S. combat brigades in the first 16 months of his administration — if conditions are deemed “favorable.” However, Obama would still maintain a “residual force” in Iraq to engage in “counterterrorism” efforts against insurgents, protect U.S. diplomatic and civilian personnel and train and support Iraqi security forces. He has been silent about withdrawing the 140,000 mercenaries that support the occupation. Author and Indypendent contributor Jeremy Scahill argues that Obama’s withdrawal plan could leave as many as 60,000 U.S. troops in Iraq, alongside a similar number of mercenaries.

The invasion and occupation of Iraq has resulted in the deaths of hundreds of thousands of Iraqis, and much of Iraq’s infrastructure remains in shambles. Also, the United States has pursued a divide-and-rule strategy that has pitted Iraq’s various ethnic and religious communities against each other.

Under Obama’s plan, Afghanistan would become the “central front in the war on terror.” The number of U.S. troops in Afghanistan is projected to double from 30,000 to 60,000 this year with a boost from combat troops freed up from Iraq. The Afghanistan war has spread into Pakistan, however, pitting Pakistani troops against a homegrown guerrilla force sometimes called the Pakistani Taliban. Obama has indicated he would continue the Bush administration tactics of unilateral U.S. attacks within Pakistan, which are further destabilizing the region.

WHAT WE NEED: Instead of rebranding the occupation, Obama should pursue a rapid and complete withdrawal from Iraq. In its negotiations with the Bush administration on a Status of Forces agreement, Iraq’s government has insisted that all U.S. troops should exit the country by the end of 2011, but the agreement is likely to leave loopholes so forces can remain past that date. Why wait for the door to hit us on the ass?

Let the Iraqis take charge of their country and oil reserves, and let them address their sectarian schisms, which have been stoked by the United States. If we want to help, we can do so by paying reparations for what was always a war of choice.

In Afghanistan, the U.S.-led reconstruction is in ruins after seven years and the insurgency has intensified as the number of international troops has grown from 40,000 to 70,000 throughout the past two years. Obama should convene multi-party peace talks that include the Taliban as the first step toward a full U.S. withdrawal. To address the root causes of the conflict, the United States should fund the development of locally oriented economies, instead of pushing export-based industries as a solution.

Finally, cut all military, security and intelligence spending by at least 25 percent by the end of first term.

TAKING ACTION: Iraq Veterans Against the War has emerged as the moral center of the antiwar movement. To find out how you can help support them, see ivaw.org. Look for groups like CodePink to raise a ruckus in the spring when Congress prepares to sign off on another $150 billion or so to finance the two wars for another year (codepink4peace.org).

OBAMA’S PLAN: Obama supports Republican led efforts to spend billions on stepped-up border enforcement. He also supported the 2006 immigration reform plan that featured a guest worker program and a burdensome path to citizenship, which would have discouraged most undocumented immigrants from coming out of the shadows to legalize their residency. More enforcement-driven immigration means politically connected private prison companies, like Correction Corporations of America, will continue to reap enormous profits from warehousing detainees.

WHAT WE NEED: Stop workplace raids and mass deportations by the U.S. Department of Homeland Security that are terrorizing entire immigrant communities. Guarantee immigrant workers the same rights as citizens. It’s the only way to prevent employers from pitting one group of workers against another — to the detriment of all. A guest worker program would create a two-tier labor system. End support for unjust trade agreements like the North American Free Trade Agreement (NAFTA) and the Central American Free Trade Agreement (CAFTA) that have driven more than a million small farmers off their lands and sent them migrating north. In the face of widespread immigrant bashing, what we may need first is for Obama to lead a national discussion on how immigrants make the United States a more dynamic and prosperous society.

TAKING ACTION: Check out the websites of the National Network for Immigrant and Refugee Rights (nnirr.org) and the National Immigration Law Center (nilc.org).

OBAMA’S PLAN: It appears Obama will propose an economic stimulus package of $700 to $800 billion over two years that offers a mix of spending on public works, unemployment insurance and food stamps — as well as tax cuts for individuals and businesses. He has backed away from his pledge to restore top marginal tax rates from 35 to 39 percent. As for the financial industry, Obama vows to impose more stringent regulations. He also wants Congress to hand him the other half of the $700 billion in bailout money, which he says he will use to help community banks, small businesses, consumers and homeowners, as well as large financial institutions. Obama has dropped strong hints that looming trillion dollar deficits will be paid for by future cuts in Social Security and Medicare.

WHAT WE NEED: A much larger bailout ($2 trillion over two years) that focuses on job creation and getting money into the hands of poor and middle-income families. Obama’s proposed tax credit for companies that hire new workers could easily be abused and makes no sense with consumer demand plummeting. Offer homeowners who can no longer afford their mortgages the opportunity to become renters. Trying to prop up inflated home values through “foreclosure prevention” is another way of subsidizing bad bank loans. We must restructure, not reform, the financial industry. Any attempts at re-regulation will be watered down by intensive lobbying, and any legislation that passes will find its enforcement hindered. Instead, nationalize the commercial banking sector. If any bank or insurance company is too big to fail, take it over. Same goes with any corporation seeking a bailout, such as General Motors or Chrysler. If they receive public funds that exceed their market capitalization, then the public should own them. Top executives of these firms should be fired and replaced with managers charged to work in the public interest.

Abolish the Federal Reserve and create a central bank that is open, transparent and accountable to the public, not the current one, which is a secret club for private banks. Ban all trading in derivatives, which are financial products based on an underlying asset. (They are like a side bet on a baseball game, such as gambling on how many strikeouts a pitcher will record.)

Only allow futures trading for producers and consumers of commodities, such as farmers that grow grains or airlines that use fuel. To deal with the economic crisis, address the stagnant wages of the last 35 years by raising taxes on the wealthy and corporations, and making the organizing climate easier for unions, all of which will lead to rising incomes.

TAKING ACTION: For grassroots organizing and strategizing around economic issues, go to bailoutmainstreet.com.

OBAMA’s PLAN: He has vowed to create 5 million new jobs by pursuing a “Green Deal,” such as by investing $150 billion in alternative energy in the next 10 years. He has also promised to have 1 million plug-in hybrid cars on the road by 2015 and to have 25 percent of U.S. electricity come from renewable sources by 2025.

WHAT WE NEED: Obama’s call to ramp up investment in wind and solar is a start, and the money saved by winding down two wars and cutting military spending will go a long way toward funding such initiatives. However, scrap plans for subsidizing so-called “clean coal”, biofuels and a new generation of nuclear power plants. Viable carbon sequestration technologies do not exist. Using food for fuel exacerbates rising food prices and world hunger. Nuclear power is neither safe nor cost-effective, and it raises environmental justice concerns because a majority of the mining and processing of uranium occurs on lands held by Native American Tribes.

Eighty percent of Americans live in metropolitan areas and a wide array of urban sustainability initiatives should be launched from funding more mass transit and bicycling to promoting urban farming and more public green space and reversing sprawl in favor of shifting people into cities, which can be much less resource intensive than suburbs or rural areas. Carbon emissions should be heavily taxed as a step towards combating global warming. Ditch carbon cap-and-trade schemes, which are rife with fraud and may turn into the next speculative bubble as financial firms have already opened up carbon-trading desks in anticipation of the huge profits that can be made.

TAKING ACTION: For more on efforts to develop a “Green Deal”, go to apolloalliance.org, bluegreenalliance.org or greenforall.org. For more radical environmental activism see risingtidenorthamerica.org or earthfirst.org. To learn more about so-called “clean coal,” go to mountainjusticesummer.org.