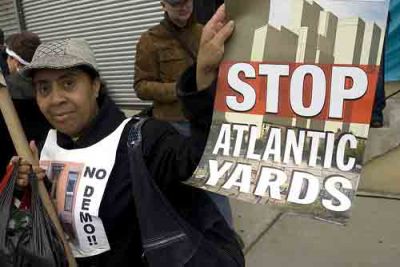 There is a rail yard to nowhere in Brooklyn, which could set the stage for New York becoming the poster child for misuse of federal stimulus funds — pork of the most rancid kind.

In Prospect Heights, there has been a five year-long grassroots fight against the Atlantic Yards development proposal that consists of 16 skyscrapers (6,430 housing units) and a $1 billion arena that would become the new home of the New Jersey Nets basketball team, which was purchased by the developer, Forest City Ratner (FCR ), to enable a corrupt land grab in the heart of the borough.

Poor planning, project mismanagement, pending lawsuits and the financial crisis have indefinitely halted the project, but not before FCR has demolished half the neighborhood and partially completed some preliminary work on an 8-acre rail yard, part of the 22-acre project site.

FCR has the ultimate insider, former U.S. Senator Al D’Amato, who is now lobbying for a slice of New York’s stimulus grant. FCR wants to use the stimulus bill for a federal bailout for a private professional basketball arena and a speculative project of unknown design, cost or benefit — a project that is already subsidized to the hilt.

Atlantic Yards is propped up by city, state and federal taxpayer subsidies in the form of direct cash payments, below-market and free public land, housing subsidies, tax breaks and exemptions, estimated to be worth between $1.5 and $2 billion. FCR expects to float an $800 million triple tax-exempt arena bond estimated to be a subsidy worth about $165 million. All for a basketball arena that New York City’s Independent Budget Office has shown to be an economic loss for the city and, at best, a wash for the state.

FCR has also received the enormous windfall benefit of New York State’s support for eminent domain at the site.

The community opposition is concerned that FCR will attempt to secure stimulus funds by claiming Atlantic Yards is a “transit project” because they are obligated to build a new rail yard. FCR received the Metropolitan Transportation Authority’s (MTA) Vanderbilt Rail Yard development rights, despite a bid less than half the appraised value, because it had committed to building a new, “state-of-theart” rail yard. The sole purpose of the new yard would be to facilitate the construction of the arena, rather than any transit need the MTA expressed in 2005 when it accepted FCR ’s lowball offer — an offer which FCR has yet to pay. Now FCR wants federal taxpayers to bail them out of their commitment to build this rail yard to nowhere.

Most important, nearly all economists agree that arenas are not economic generators or cost-effective job creators. FCR has never even publicly announced the estimated number of new jobs the arena would create because it would be woefully few, especially in relation to the arena’s public cost. And the opportunity costs are dramatic.

The project, including the arena, is not “shovel-ready” by any stretch of the imagination, as FCR doesn’t own the land it needs to construct it and, according to the developer, it’s undergoing an extensive redesign. The proposed affordable housing is nowhere in sight and construction is highly unlikely to start in 2009, if ever.

The use of stimulus funds for this project birthed in opaque backrooms, and laden with non-competitive and no-bid contracts, would violate the bill’s accountability provisions requiring a transparent and competitive bidding process before contracts could be entered into. Atlantic Yards failed that test a long time ago.

Using the federal funds for Atlantic Yards would seriously undermine the stimulus package and expose it to widespread ridicule. The intent of the bill is to generate jobs and kick-start the economy, not bail out and further prop up a private developer’s failed project — the Troubled Assets Relief Program (TARP) took that approach and look where it got us. TARP was about rewarding bad behavior; the American Recovery and Reinvestment Act isn’t. Yet a closed-door effort is underway to convince New York Governor David Paterson that an Atlantic Yards bailout is a state priority.

Before the Ratner lobbying effort geared up, the state issued its 60-page wishlist of more than 1,900 priority projects in need of stimulus money. Atlantic Yards was not on that list. If Atlantic Yards eventually receives stimulus funds, we’ll know it was not due to any stated need or on the merits of the project, but rather on pork-scented cronyism. 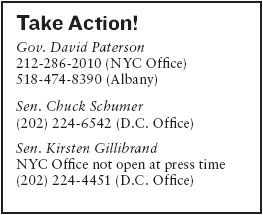