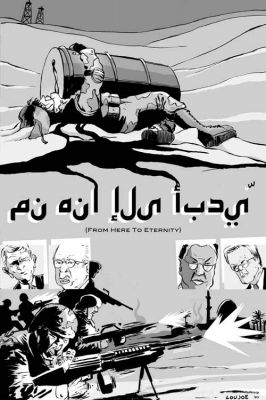 War Without End: The Iraq War in Context
By Michael Schwartz
Haymarket Books, 2008.

Journalist and sociology professor Michael Schwartz posits a simple explanation for the U.S.-led war against Iraq: a desire to “strip economic and political power from key Middle Eastern nations, then extracting oil at a pace far faster than the countries themselves had deemed judicious.”

Weapons of mass destruction? Of course not. And everyone — from the Bush administration to Iraq War coalition supporters — knew that this alleged bogeyman was a fictional construct.

Instead, Schwartz writes, the U.S.-led invasion harkened back to the heyday of imperialist bluster, a time when American strength easily trampled international obstacles.

“For example,” Schwartz explains, “the U.S. invasion of Iraq, designed to open up the Iraqi oil fields to foreign investment, was entirely consistent with the long legacy of military and economic intervention around the world. … The CIA overthrow of the elected Iranian government in 1953 reversed the nationalization of Iranian oil fields; the overthrow of the elected Guatemalan government in 1954 prevented the nationalization of foreign–owned banana plantations.”

In short, the United States assumed the takeover would go unchallenged and hastily disbanded the Iraqi Army, unwittingly leaving more than a half-million well-trained soldiers armed, unemployed and angry. On top of this, nearly 100,000 engineers, technicians and administrators were fired from government agencies and businesses that had previously been state-owned, entities that the United States quickly shuttered in favor of private firms that have done little beyond collecting vast sums thanks to no-bid, no-accountability contracts.

One example will illustrate the folly of this tactic: Early in the occupation, the coalition decided to discontinue the aerial spraying of fields of date palms and growers were ordered to hire private antipest companies themselves. Unfortunately, most farmers lacked the financial wherewithal to do this; as a result, the crops became infested and production shrank precipitously, leaving agronomists and their families destitute.

This, Schwartz writes, forced families off lands their ancestors had tilled for generations. The parallel closing of state-sponsored factories led to “urban slumification.”

Shi’a and Sunni, now crowded into miserably inadequate quarters, in cities with too little water, erratic electricity, food shortages, rampant unemployment, scant healthcare, and closed schools responded by fighting not only the invading armies, but each other. Those who could leave Iraq did so, with nearly two million pouring into Egypt, Iran, Lebanon, Syria and Europe to escape a tidal wave of suffering.

Those who stayed — the poorest, least educated and most religiously conservative — have fought like lions to protect their holdings. “In the mind of the war’s planners,” Schwartz writes, “the invasion was sure to yield a quick victory, to be followed by the creation of a client state that would house crucial, enduring U.S. military bases from which Washington would project power throughout the Greater Middle East.”

Obviously that hasn’t happened. Protests by organized labor, the unemployed and Muslim militias have stymied U.S. plans, offering dogged resistance, first to Coalition occupiers, and later to the Iraqi puppets installed by the United States and its allies. What’s more, despite Bush’s best efforts, Iraq and Iran are not at each other’s throats and indigenous military formations continue to develop.

War Without End paints a detailed picture of the fighting, focusing both on the lunacy of U.S. foreign policy and the resultant despair these policies have caused. It’s grim but powerful reading. Although I wanted a fuller explication of the roots of Shi’a/Sunni conflict, War Without End is a brilliant and readable introduction to the destruction wrought by America’s lust for oil and an insightful look at 21st century colonialism.