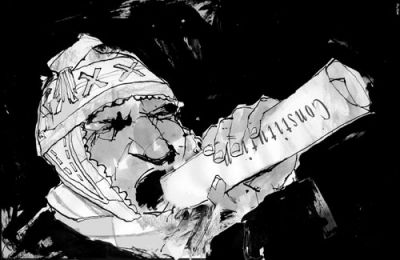 Ten years ago, it would have been unthinkable that in 2009 Bolivia would approve a constitution rejecting neoliberal policies and recognizing indigenous rights. Drawing on a decade of advocacy, research and reporting from Bolivia, the Democracy Center looks for lessons from the struggle in Dignity and Defiance: Stories from Bolivia’s Challenge to Globalization. Editors Jim Shultz and Melissa Crane Draper weave together eyewitness accounts and interviews framed by insightful analysis.

The book presents a range of perspectives within the globalization debate, from Bolivian officials on the payroll of the U.S.-based Inter-American Development Bank, to Doña Porfira, one of the countless Bolivians whose livelihood was washed away during the massive Enron and Shell oil spill of 2000. The book documents the enormous gap between the reality on the ground and the theoretical benefits of policies dictated by the “Washington Consensus,” under which funds are loaned to developing nations on the condition they privatize state industries and cut public spending.

Bolivia has the greatest number of indigenous people in South America and is among the continent’s poorest nations. This poverty can be traced back to the extraction of vast amounts of silver from “Cerro Rico” by the Spanish, which financed its empire for the next two centuries, but left Bolivia deeply impoverished. Chronic poverty translated into chronic political instability and dependence on foreign aid. Starting in the 1980s, the economic policies of the “Washington Consensus” were leveraged upon Bolivia in return for desperately needed financial aid. This succeeded in enriching the elite few, while the vast majority suffered.

Recently, Bolivians have had increasing success rejecting these policies. During the Water Revolt of 2000, Bechtel took control of Cochabamba’s water supply and distribution and jacked up the price. In response, residents organized,took to the streets and drove Bechtel out of the city. Shultz was awarded for his reporting in Cochabama by Project Censored. Ever since, Bolivia has found itself at the forefront of opposition to neoliberalism, and the Democracy Center has been on the ground to report on events and to organize campaigns in solidarity.

When Bechtel sued Bolivia for $50 million dollars for the loss of the water contract in 2004, international solidarity movements pressured the company to settle for a five-cent symbolic payment. Bolivian social movements and indigenous groups have also had increasing success, for the first time propelling one of their own, Evo Morales, to the presidency in 2005. With this victory Bolivians firmly rejected the neoliberal policies that perpetuate poverty. The editors point out that while Morales has begun directing profits from the sale of Bolivia’s natural resources towards the indigenous majority, an abundance of resources alone is not enough to guarantee wealth. Bolivia’s challenge is to create a sustainable model of resource extraction and growth.

To further discuss Bolivia’s progress and challenges, the Indypendent’s Jaisal Noor caught up with Jim Shultz.

JAISAL NOOR: As much as your book deals with the successes of the anti-corporate globalization movement, it doesn’t gloss over its shortcomings. Could you share some of your insights on the future of the struggle in Bolivia?

JIM SHULTZ: It’s a sad fact that nine years after the Water Revolt, which was a global inspiration, the public water company’s situation here in Cochabamba is still miserable — it’s still inefficient, it’s still corrupt, it’s still not doing the job. Part of the lesson here is if we don’t follow up these great victories in the street with nutsand- bolts work of creating the alternative that actually delivers the goods, then the victory ends up being hollow. And sooner or later, if public control of these resources doesn’t work, the people in places like Bolivia are going to begin to turn around and say, “Gosh, we really should have corporations doing this.” So as a movement for social justice we have to pay much more careful attention to building these public systems that can deliver the goods.

JN: What do you think the future holds for U.S.-Latin American relations?

JS: Oddly enough, the one upside to the “global war on terror” is that the Bush Administration didn’t pay any attention to Latin America while an important pendulum swung with the election of a whole class of left-of-center national governments. And they are a very united force. After the violence in Bolivia in September and October [2008], the South American presidents not the United States intervened.

Check back soon for the full interview with Jim Shultz.