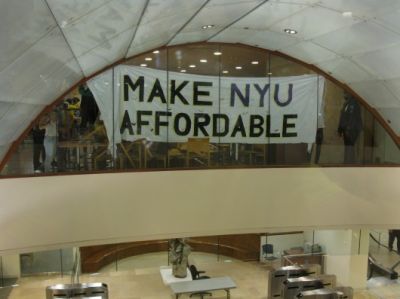 Between 60 and 75 New York University students have occupied the third floor of the Kimmel Center for University Life, located at 60 Washington Square South. The sit-in began about 10 p.m. on Wednesday.

A statement on TakeBackNYU.com reads: “NYU is the latest university to join a wave of global student occupations in the name of student empowerment. The Kimmel Center for University life is officially a reclaimed space.”

Charlie Eisenhood of the website NYU Local is blogging from inside the occupied building and has posted a series of photos.

Video of the the NYU occupation is livestreaming at http://www.ustream.tv/channel/take-back-nyu.

The students have issued a long list of demands, including:

* That the NYU Administration agrees to resume negotiations with GSOC/UAW Local 2110 – the union for NYU graduate assistants, teaching assistants, and research assistants.

* That NYU signs a contract guaranteeing fair labor practices for all NYU employees at home and abroad.

* The establishment of a student elected Socially Responsible Finance Committee.

* That annual scholarships be provided for thirteen Palestinian students, starting with the 2009/2010 academic year.

* That the university donate all excess supplies and materials in an effort to rebuild the University of Gaza.

* Tuition stabilization for all students, beginning with the class of 2012.