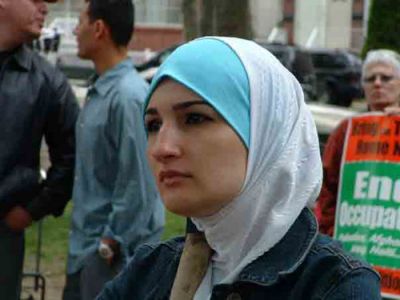 Linda Sarsour, a Palestinian born and raised in Brooklyn, tirelessly helped put together several rallies in New York City after Israel launched its 22-day offensive on Gaza. As a Bay Ridge community organizer and head of the Arab American Association of New York, she spoke to imams at local mosques, translated and distributed fliers at high schools and used Facebook to attract as many spectators as possible.

“We [the Arab-American and Muslim communities] have been the underdog for so long,” said Sarsour, 28, “so we organized these protests around our emotions. We saw anger, rage and sadness. It was almost like those were our families back there.”

The resolve was well worth it. Arab- American and Muslim communities of New York and various grassroots movements united in their call for an end to the atrocities. Thousands demanded that the United States stop funding the Jewish state during two massive protests at Times Square. The opening verse of the Qur’an was recited at one, and spectators could be seen praying in the midst of the crowds. Hundreds also turned out at City Hall to denounce Mayor Michael Bloomberg for visiting Israel during the fighting and ignoring Gaza.

Although Sarsour had helped mobilize the communities on other occasions, she said that the Gaza protests had a distinct energy. New York City saw the largest number of pro-Palestine protests across the nation. And of the rallies organized during the past seven years — against the Iraq, Afghanistan and Lebanon wars — those in support of Gaza were the most critical of U.S. foreign policy.

Over 280 pro-Palestine protests in some 117 cities across the United States have symbolized a shift in the activism of the Arab-American and Muslim communities. Despite this mobilization, these communities still lack an organization whose primary mission is the systematic articulation of demands on the national level. Nonetheless, efforts to mobilize on the local level continue, and younger activists as well as artists, grassroots organizations and publications focusing on Arab-American issues have emerged.

For Dr. Rashid Khalidi, professor of Arab Studies at Columbia University, the recent surge in protests “represents a higher level of activity [than] in the past. It may be that these demonstrations all over the country represent a new beginning.”

The previous lack of activism is largely attributed to the post-9/11 era, during which a chill fell over the activities of the communities. “The atmosphere was much more hostile, much more menacing,” Dr. Khalidi told The Indypendent during a phone interview.

There are roughly 600,000 Muslims in New York, and according to the Arab American Institute, some 405,000 Arab-Americans. Arabs and Muslims are concentrated in the neighborhoods of Bay Ridge, Bensonhurst, Astoria, Jamaica and Atlantic Avenue.

A 2006 U.S. Department of Justice report found that Arab-Americans feared racial profiling and forced emigration, were suspicious of the government and law enforcement and were concerned about civil liberties.

“Many Arab-Americans undoubtedly, and correctly, concerned for their economic and social welfare, stepped back from active involvement or identification with Arab-American or Arab issues,” said Dr. Janice Terry, professor of the Modern Middle East at the Eastern University of Michigan.

The USA PATRIOT Act, persistent stereotypes propagated by the mainstream media, George W. Bush’s “War on Terror,” and special registration that required tens of thousands of immigrants to be questioned and fingerprinted deepened a growing fear among many of the nation’s 3.5 million Arab-Americans.

But the situation has since thawed as far as citizens are concerned, Khalidi said. The shift, he argued, might be attributed to sentiments around the election of President Barack Obama. “Attacks against Obama for being a Muslim and for palling around with Palestinian terrorists … did not succeed,” he said.

Small gestures from Obama, including the use of his middle name Hussein in the inauguration ceremony, his granting his first one-on-one interview as president to Al-Arabiya TV and his appointment of former Senate Majority Leader George Mitchell, an Arab-American, as special envoy to the Middle East, have raised hopes that the new administration is willing to take a more open and inclusive approach to working with Muslims and the Arab world. Still, says Dr. Terry, “those closest to Obama in the White House represent the old approach of exclusion of Arab-Americans in political decisions.” In addition, the absence of a single all-encompassing political lobby similar to the American Israel Political Affairs Committee (AIPAC) puts the community at a disadvantage on the national level, and hence it cannot directly affect policy or debate, Terry argued.

However, there has been a rise in the political awareness of the younger generation, some say. “They see what’s happening, and they will not accept it. This generation is educated in America’s political system and they are following [Arab] media. They have hope in the new President. They want to pressure New York’s administration to change,” said Ayman el-Fawa, a member of the Palestinian Right to Return Coalition and an organizer of several Gaza protests.

Cultural icons who have noted Arab and Palestinian matters have also helped. Bono spoke of the “Palestinian dream” before a half-million people at the Jan. 18 “We Are One” pre-inaugural concert on the Washington Mall. Comedian Jon Stewart of “The Daily Show” took aim at Israel’s invasion of Gaza with satirical humor. During the conflict, opinion polls showed the U.S. public’s support for Israel’s offensive to be almost evenly divided, while a large majority of Americans still blamed Hamas for the hostilities.

“Though the community is far from being depicted in way we want, we’re winning small battles along the way,” said Linda Sarsour, noting a full-page open letter to Obama printed in the New York Times Jan. 21. The $57,000 required to publish the letter was raised in New York.

The letter demanded an end to the blockade of Gaza; that Israel adhere to international law; that a lasting ceasefire be respected by both parties; and that the U.S re-evaluate delivering $3 billion of annual aid to Israel. Several Arab-American and Muslim organizations, among them the American-Arab Anti Discrimination Committee, Islamic Circle of North America, and the Muslim Public Affairs Council, signed the letter.

“The community has sensed that America as a whole is willing to question what is happening in Palestine,” said Samer Badawi, director of the United Palestinian Appeal. The nonprofit received more online donations last month than they did in a year, he said. “This speaks to people’s unwillingness to let the government dictate to them how and who they support in Palestine.” 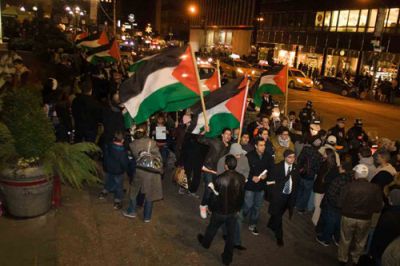 But the numerous groups supporting the Palestinian cause have remained disparate, lacking a single coherent message putting forth the concerns of the communities on a national level.

The various movements that participated in the Gaza protests, for example, advocated several messages. Some were in support of Hamas, while others were not; some were in support of Obama, while others were openly skeptical of him. “Part of the problem is that the struggle itself is displaced,” Badawi said. “We also lack a high profile voice for our cause, much like what Hanan Ashrawi’s used to be.”

Thus, the emergence of a single Arab or Muslim American movement that has been able to act as a national political lobby has been hampered. “This will always be a challenge for the Arab-Americans. We will always find groups that want to promote their own causes and that have different views on the key issues,” el-Fawa said.

Regardless, local political efforts have emerged in New York and in Michigan, where Arab-Americans make up five percent of the population and own an estimated 3,000 businesses.

In Detroit, Arab-American leaders have made a point of registering members of the community, urging them to participate in politics. Key leaders, such as former Sen. Spencer Abraham (R-Mich.), have encouraged participation and helped train young people, said Dr. Ron Stockton of the University of Michigan. There are enough local Arab-American leaders who are critical of Israel, “that few people feel afraid to express their dissent” about U.S. policy.

In New York City, the Arab and Muslim communities organized themselves politically like never before during the recent 2008 race for an open seat in New York’s 13th Congressional District, which encompasses Staten Island and parts of Brooklyn. The seat had previously been held by Republican Vito Fossella for 12 years. “There is an understanding that these things have to begin at a local level there, and that there is no way to have a voice on the national level unless those local building blocks are in place,” Khalidi said.

The community fundraised and ran a get out- the-vote campaign in support of Democratic congressional candidate Michael McMahon, as well as Assemblywoman Janelle Hyer-Spencer (D-Stanton Island), with 130 members of the community knocking on 9,000 doors in Bay Ridge, Bensonhurst and Dyker Heights. “This was a breaking point in our community, finally people felt that their vote counted,” Sarsour said. “The [elected officials] came to our mosques and to our community town halls to thank us, the Arab-American community. After so many failures we felt wow, we really have a base here.”

But despite these ripples of organized activism, the impact still does not match the numbers. “Arab-Americans are still largely first generation,” Khalidi said. “They are largely un-assimilated and unaware of how the United States functions and of how to exercise influence in this society.”

And further harming the matter is the mainstream media, which has ignored the messages put forth by the communities. “The same blatant bias that covers the conflict characterizes the depiction of protests in support of Palestine and against Israel’s actions. They are systematically under-reported. In fact, most Americans did not have the slightest notion that there were unprecedented protests across the U.S.,” Khalidi said.

And while more people are speaking out, “Mainstream media is not fostering an open conversation of what is really happening,” said Omar Qureshi, a New York-based medical doctor and political activist. “It needs to show that there is a different side to Muslims and Arabs, other than the traditional views. People also only speak out when they are secure about their jobs. There is still that fear there.”

The only way to conquer these media biases and remaining challenges for the Arab-American community appears to be to organize on the national level, utilizing resources while creating a coherent set of demands.

“We need a real concerted effort with real resources behind it, not just volunteers sending out press releases,” said Yasmin Hamidi of the Arab American Professionals of New York.

Regardless, the community has come far. “We are finally approaching a point where we have the capacity to form a political movement that has a voice,” Baddawi said.

To read more coverage on the Arab-Israeli conflict and related activism, click here.