overflowed last night for a celebration of the life of folksinger Odetta, who died Dec. 2 at the age of 77. The line-up included the a capella group Sweet Honey in the Rock, folk legends Pete Seeger and Harry Belafonte, singer and musicologist Bernice Johnson Reagon, poets Sonia Sanchez and Maya Angelou, and country music star Steve Earle.

The evening was filled with music and personal remembrances of the woman who inspired a generation of protest singers.

Before singing one of her trademark songs, “Keep On Movin’ It On,” Odetta’s friend Emory Joseph described “the song Odetta sang with her face” as she ate foods that she enjoyed. 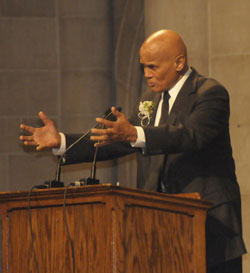 Harry Belafonte told how, as a rising young star, he was given an hourlong TV program to host. For his first show, he chose to feature Odetta, explaining to the sponsor, Revlon, that she “wouldn’t be needing any make-up.” After the broadcast, he was informed that the contract had been canceled. Pointing out that he and Odetta both went on to be nominated for Grammy awards (Belafonte won several), he said, “We won in the end.”

Peter Yarrow of the 1960s folk trio Peter Paul and Mary described making a pair of earrings for Odetta because “I fell in love.” He sang with his daughter Bethany, who toured with Odetta, and the Brooklyn Tech Choir.

Video clips from Joan Baez, Bob Dylan, and Ramblin’ Jack Elliott (who got his “Ramblin’” name from Odetta’s mother) attested to the wide reach of Odetta’s influence. Her recordings brought “Oh Freedom” and “This Little Light of Mine” into households across . She sang at the 1963 March on and for the marchers in . Martin Luther King, Jr., called her the “Queen of American Folk Music.”

Growing up in the 1960s and 70s, I was politicized by the music of Odetta and those she influenced. She sang spirituals and work songs, blues, and songs of slavery and racism. She was an idol of mine and of many musicians I listen to.

I had two memorable encounters of my own with Odetta. In 1988, she sang for the 40th anniversary celebration of the Guardian Independent Radical Newsweekly at the Village Gate, which I helped organize. Toward the end of the evening, I found myself backstage on clean-up. The door to Odetta’s dressing room was open, and she was sitting alone, lost in thought. She looked up at me as I stood in the doorway and asked if I had enjoyed the show. I explained that I had missed most of the program, since I had been working the event. “Oh, it’s always the ones who work so hard who don’t get to enjoy it!” she exclaimed, as tears came to her eyes.

Ten years later, Odetta, along with Charlie King, Pete Seeger, and the Peoples’ Voice Café, was given the War Resisters League Peace Award. She performed at the awards dinner, as did Charlie and members of the Peoples’ Voice collective (myself included). She seemed to go into a trance before singing, almost as if the music were singing her. She went somewhere deep inside herself to bring out the songs. Her voice was bigger than a mountain, filling the large room. In one of the biggest thrills and honors of my life, I found myself on stage at the end of the program, singing the finale with Odetta. 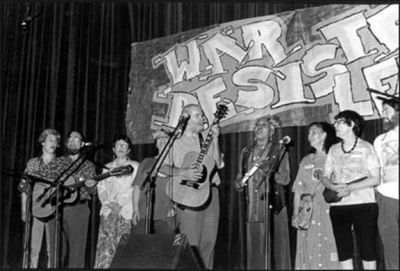