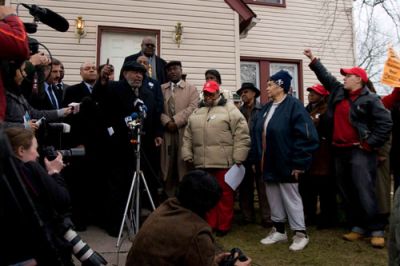 YOUR CASA IS YOUR CASA: New York City Council Member Thomas White, Jr. (D-Jamaica) addresses the crowd of ACORN Home Defenders and neighbors who gathered Feb. 19 to defend the home of Queens resident Myrna Millington, who is dressed in sweats and a Yankees hat. As a result of a predatory loan, Millington’s home is now in foreclosure. “I am not leaving my home,” she told reporters. PHOTO: JOEL COOK

Myrna Millington stood on the front lawn of her home of 38 years, in Laurelton, Queens, Feb. 19 and announced, “I am not leaving my home. I am staying right here.”

The victim of a predatory sub-prime loan, the 73-year-old widow and retiree has been in foreclosure since September 2008 and now faces eviction.

Millington was joined by a crowd of community supporters chanting, “Enough is enough!” The rally was one of many actions held across the country to mark the launch of a nationwide “Home Staying” Campaign spearheaded by the nonprofit organization ACORN (Association of Community Organizations for Reform Now).

The ACORN campaign aims to prevent evictions by sending teams of “Home Defenders” trained in civil disobedience to the aid of those facing eviction. The organization also provides free loan counseling and has thus far been able to postpone the auction of several properties, including Millington’s house.

America’s home foreclosure crisis continues to snowball. According to ACORN, 2.3 million families lost their homes to foreclosure in 2008. Currently, in Queens alone, more than 100 homes that have been repossessed by financial institutions are sold at auction every week.

On Feb. 18, President Barack Obama rolled out his “Homeowner Affordability and Stability Plan,” which according to the administration, will keep up to nine million homes from foreclosure by allowing homeowners to restructure mortgages. The plan will go into effect March 4.

As public outrage mounts over reports of Wall Street bonus packages while billions of bailout dollars remain unaccounted for, citizens are banding together and planting their feet.

“We’ve been working too hard for this,” said Denise Parker, a Queens resident and one of several “Homestayers” to speak at the demonstration. “We’re not moving.”

ACORN is calling on state governments to enact a one-year moratorium on all home foreclosures.