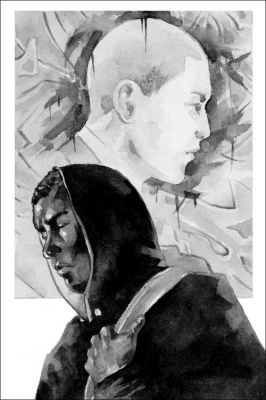 Hours before Barack Obama was sworn in as president of the United States, I waited to pass through a metal detector to get into my own high school in Bedford-Stuyvesant, Brooklyn. It was the usual process: NYPD school security officers robotically commanding me to take my I.D. out, swipe it through the machine, put it back in my wallet, put my wallet in my book bag, take off my boots, and put both into the scanning machine while I walked through the metal detector in my socks. Obama’s impending inauguration lent a special air to the day and I thought things might be different — that students at my school would be treated as human beings not criminals. Instead, a blank-faced guard handed me a yellow button to wear that read, “Respect For All By What I Do and Say.”

Walking to class, I saw teachers wearing black T-shirts that had the same message as the button. The teachers looked happy and proud. My own first period teacher was not sitting at his desk but relaxing at the back of the classroom with an arm draped over the window sill. He didn’t try to start a discussion about who Obama is, what he represents, or how he might make people’s lives better. Teachers at our school occasionally enforce discipline and attempt to put misbehaving students in order, but most of the time school has the feeling of chilling on the block. This was one of those days, except the teachers were in a better mood.

“I should have stayed home to watch the inauguration,” one classmate said to me. “But I had to come to school because I have a basketball game later.”

As with any other holiday, both students and teachers conversed about trivial matters. We did not discuss how we feel about Obama’s promises, the destruction of Gaza by Israel, if Obama really will leave the Middle East alone, or the question of whether Obama is just another politician who said things to get into office with no intention of actually creating the changes we need. As I looked around me, the ignorance of the teachers was reflected in the low attendance and boredom of the students.

Then, the loudspeaker came on. Sounding like it was coming through a cell phone, Aretha Franklin’s anthem “R-E-S-P-E-C-T” was blared into the classroom to reiterate the message on our buttons, although the connection between Obama’s inauguration and what it means to be respectful was still unclear. Some students got out of their seats and began to dance around the classroom. Teachers and school administrators ran around with silver and blue balloons, beaming at students, their eyes alight with hope.

Depending on their class schedules, students were organized into different groups to watch the inauguration. My teacher took my class to the music room around 10:15 a.m.

A television was set up on each side of the room. We saw huge crowds of people bundled in their winter coats standing in the cold waving American flags. A few minutes into the class, students began to have side conversations. I fell asleep, but woke up in time to witness Obama being sworn in. As soon as he began his speech, some students resumed sleeping. Others got up and left the room saying, “Yo, I’m outta here.” Another student was kindly asked by a teacher to move his seat and make room for others. He responded saying, “Miss, I ain’t moving. We got a black president now.”

I was stunned and could only think, “Wow, what an idiot” and that if he was thinking this way, then others might think this way too. We must be careful not to think that Obama’s “blackness” automatically means that things will be better, just as having a black principal does not guarantee an equal education or fair treatment of students and teachers.

Toward the end of Obama’s speech he said, “Let it be said by our children’s children that when we were tested we refused to let this journey end, that we did not turn back nor did we falter; and with eyes fixed on the horizon and God’s grace upon us, we carried forth that great gift of freedom and delivered it safely to future generations.”

Hearing this, I thought Obama’s words resembled those of Martin Luther King, Jr. and sounded like a plea to us to put our complete faith in him the way people once did with Dr. King. As soon as I began to really think about these ideas, a security guard leaned into the room and wagged her finger at us saying, “Get to class.” Less than a half-hour later, the principal sent students home for the day by announcing over the loudspeaker, “This is a rapid dismissal, everyone out of the building, fire.”

The only thing on fire was my mind, even as it was drowning in the murky waters of miseducation.

“Marcus Turner” is a pseudonym.

For more reflection on the inauguration, see Crossing the Hyphen: Obama’s Inauguration Allowed Us to Come Home by Nicholas Powers.