EZBET ABBED RABU, GAZA—The first house I visited in this community in northern Gaza was that of my dear friends, who I’d stayed with in the evenings before the Israeli land invasion began, with whom I had huddled in their basement as the random crashes of missiles pulverized the neighborhood. The ground floor room was the least affected: disheveled, piles of earth at bases of windows, mattresses turned over and items strewn.

Upstairs the first level apartment, complete disarray. Feces on the floor. Everything broken. Opened cans of Israeli army provisions. Bullet holes in walls. Stench. To the second floor, all of the extended sons and wives and children’s rooms. More disarray, greater stench. This was the soldiers’ main base judging by the boxes of food — prepackaged meals, noodles, tins of chocolate and plastic-wrapped sandwiches — and the clothing left behind by the occupiers. A pair of soldier’s trousers lay in the bathtub, soiled with shit.

F. tells me: “The smell was terrible. The food was everywhere. Very disgusting smell. They put shit in the sinks. Our clothes were everywhere. The last time they invaded [March 2008], it was easy. They broke everything and we fixed it. But this time, they put shit everywhere: in cupboards, on beds — my bed is full of shit.”

The usual perspective and gratitude for surviving overrides what is her right to be indignant.

“Thank God we have a room in our house. Many people’s houses were completely destroyed,” F. says of her own seriously-damaged house. The soldiers who ransacked, destroyed their clothes and shelled the home also stole a computer and some money, she tells me. Why would she lie? I know the family to be honest. They have no reason to fabricate the thievery. And theirs is not an isolated case.

Amnesty International sent a fact-finding team to Gaza following the Israeli attacks. Chris Cobb-Smith, a military expert who served as an officer in the British Army for 19 years said, “Gazans have had their houses looted, vandalized and desecrated. As well, the Israeli soldiers have left behind not only mounds of litter and excrement, but ammunition and other military equipment. It’s not the behavior one would expect from a professional army.”

Eva Bartlett has been in Gaza since November. This article is an excerpt from an article published on electronicintifada.net. 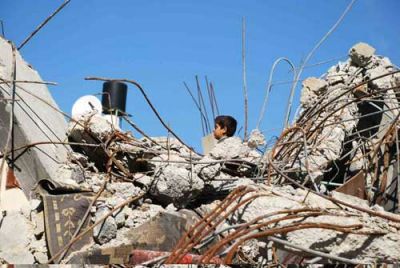