To view a PDF version of this article, click here. 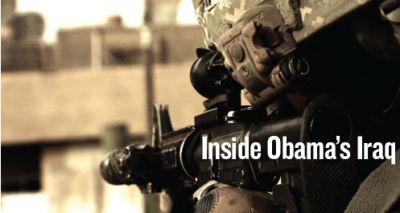 PHOTOS BY RICK ROWLEY OF BIG NOISE FILMS. ALL WERE TAKEN DURING AN UNEMBEDDED TOUR OF IRAQ IN JANUARY 2009. LEFT: DEMOCRACY AT THE BARREL OF A GUN: A U.S. soldier watches over Sadr City, a Shiite slum of 2 million people in northeast Baghdad that has been the scene of some of the fiercest fighting during the Iraq War.

SABAA AL BOR, Iraq—At the height of sectarian fighting two years ago, Sunni militias fired hundreds of mortars each day on parts of this mostly Shiite village nine miles northwest of Baghdad, driving nearly all of its estimated 50,000 residents outside Iraq or to other parts of the country.

“My house was destroyed and my son was kidnapped and killed,” says Abbas Fadhil, a Shiite imam accused of being a militia leader by Sunni insurgents. He left the city in 2006 and returned in 2007.

“There is reconciliation between the two sides,” Fadhil says, but reintegration has not taken place. “Shops and houses are still destroyed — more from the Shiites, but also from the Sunnis.”

On one street corner, I asked the half-dozen men standing there how many of them had lost an immediate relative — all claimed they had. Some raised shirts to show shrapnel wounds, ranging from light scarring to horrific gashes that appeared impossible to survive.

The United Nations recently estimated that as many as 500,000 of the approximately two million Iraqi refugees who have fled the country since 2003 might return this year. Many are simply returning because they can no longer afford to stay in neighboring countries, especially Syria, where Iraqi refugees struggle to obtain official work permits. But they won’t necessarily be returning to the same houses, neighborhoods or cities from which they fled.

“The Americans provided no security, they did nothing for us,” says Hussein Fadhil, a Shiite and one of the estimated 2,000 people who remained in Sabaa al Bor throughout the fighting, despite losing his father to a mortar barrage. “They told us they didn’t know where the mortars were being fired from.” 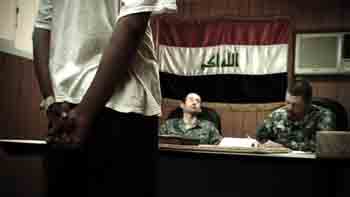 In 2006 and 2007, staying in Sabaa al Bor was unthinkable for many residents. But today, at least half of the village’s population has come back.

Security has returned, thanks to the Sunnis’ realization that they had lost the civil war — a bitter pill to swallow. Many Sunni communities subsequently adopted the “Awakening movement” in late 2006, and it spread across the country in 2007, aided by active U.S. support, arms and funding.

Fearing expulsion from Baghdad, Sunnis formed security teams known by a variety of names, such as the Awakening, Concerned Local Citizens and Sons of Iraq, and embraced the U.S. Army for protection and patronage against their Shiite rivals, whom they claim are supported by Iran.

Iraq remains dangerous. During a two-week trip in mid-January, I still frequently heard explosions. Reporting trips around Baghdad and its outskirts provided ample evidence that, while violence is at a comparative lull, attacks still occur. 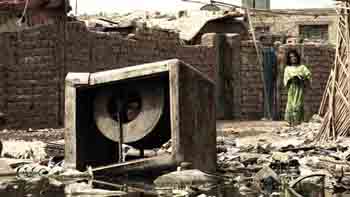 On patrol with U.S. soldiers from the First Armored Division in Sadr City Jan. 17, I was relieved that a bomb squad found and disarmed an explosively formed penetrator (EFP) — an armor-piercing roadside bomb — before our patrol discovered it the hard way.

In the three weeks before I arrived, EFPs killed at least two U.S. troops in and around Sadr City, and soldiers discovered at least two other bombs before they exploded. The military has switched most of its vehicles to MRA Ps (Mine Resistant Ambush Protected) — heavy vehicles nearly two stories tall that look absurd as they pass through normal traffic. Nevertheless, an EFP killed another soldier nearby the day after I went on patrol.

This sort of low-intensity violence could go on for years. The soldiers I was with speculated that the bomb they disarmed was homemade, having been wired for detonation with a cheap camera flash and 150 feet of copper wire. It had been buried in some garbage beneath a billboard depicting smiling Iraqis embracing members of the new Iraqi army.

According to author and former Marine Bing West, Iraq is the first vehicle-based insurgency. The U.S. military’s solution has been to build 100 miles of concrete walls and turn many Baghdad neighborhoods into easily controlled districts with one exit and entrance. The partitioning of more than half the city has also created sectarian enclaves in what were once mixed neighborhoods. It is unclear when most of the walls will come down, and for the moment, more are being built than are being removed.

In Sadr City, one of the last neighborhoods in Baghdad to be walled off, U.S. Capt. Andrew Slack of the 1st Armored Division estimates his soldiers have built around three miles of walls in their sector, and continue to build them, though at a slower pace than before.

“We have not taken any down,” Slack says.

“God only knows how many walls there are in Baghdad,” said Mohammed Askari, a spokesman for the Ministry of Defense, when asked to provide a number. “They bring these walls every day and put them in streets.” 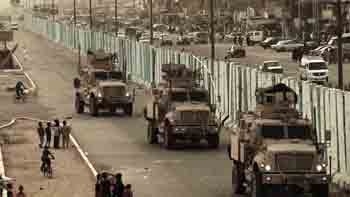 PHOTO: A DIVIDED CITY: A convoy of hulking U.S. military vehicles makes its way through Sadr City. Baghdad’s roads and neighborhoods are partitioned by miles of blast walls.

Many Baghdad residents say they are grateful for the walls. But others complain they are divisive, have damaged local economies and make traffic nearly unbearable — trips of only a few miles can often take hours, and during rush hours hundreds of cars line up to enter and exit some neighborhoods. Emergency vehicles have trouble entering or leaving the neighborhoods, putting resident’s lives at risk.

However Baghdadis feel about them, the walls remain a stopgap measure, rather than a solution. In Sleikh, a northern Baghdad neighborhood that is mostly Sunni, local “Sahwa” (which means Awakening) commander Abu Waleed pointed to a closed bridge that separated his neighborhood from a nearby Iraqi and U.S. Army base.

“They opened this 10 days ago,” says Abu Waleed (a pseudonym), a former member of Saddam Hussein’s security forces. “Five days later, a bomb exploded, so they closed it again.”

The Sons of Iraq might have helped decrease the violence in the short term, but decommissioning these paramilitaries will be difficult. According to Abu Waleed, the police and the army have incorporated between 5 and 10 percent of the Sons of Iraq, far fewer than the approximately 20 percent of the estimated 100,000 militia members that the Iraqi government had promised to retain.

He added that the members who have not been officially incorporated into security forces have not been paid, which the Iraqi government agreed to do.

“People are beginning to quit,” Abu Waleed says. “We demand that the Iraqi government pay attention to the Sons of Iraq, because they took part in securing the neighborhoods and take care of those who quit their jobs.”

There are also questions about how removed the Sahwa really are from the U.S. military. The assistant of one Sahwa commander in Anbar recently bragged to a reporter that contracts were coming directly from the U.S. military, deliberately circumventing the Iraqi government. Such contracts, generally for construction projects, have been used to fund local militias since 2007.

Askari of the Ministry of Defense denies this.

Another point of contention is the Iraqis that are still being held prisoner by the United States. Though U.S. forces have released more than 10,000 Iraqis in the last year, more than 10,000 others are still being held. Askari said that the turnover of prisoners is supposed to begin in July and be completed by the time the United States pulls out.

STATUS OF THE OCCUPATION

Under the Status of Forces Agreement (SOFA) between the Iraqi and U.S. governments last November, all U.S. military forces are slated to leave Iraq by Dec. 31, 2011, nearly nine years after the war began.

Iraqis on the street tend to see the SOFA as a document that the two governments will have to be forced to implement.

“Their presence is reduced,” said Umm Teeba, a teacher living in Saidia, in south Baghdad. “But on election day (Jan. 31), there were many of them on the streets.” 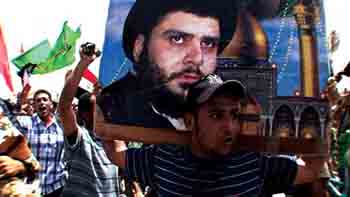 PHOTO: MUQTADA: Supporters of Shiite cleric Muqtada Al-Sadr carry his portrait through the streets of Sadr City. Al-Sadr continues to be a fierce critic of the U.S. occupation. The populist movement he leads is demanding that the United States honor a recent agreement to withdraw all its forces from the country by the end of 2011.

Perhaps most important, though, are questions the SOFA does not address. If indeed a full U.S. withdrawal is completed by the end of 2011, Iraqis will need their own status of forces agreement to settle the question of separatist Kurdish movements in the northern cities of Kirkuk and Mosul that have persisted for decades and remained unresolved under the occupation.

The Kurds have once again been forced to accept the political and military status quo, at least until the United States fully withdraws. Given the strong ties between the U.S. and Turkish militaries, Kurdish separatists have never received meaningful U.S. support for independence. Continuous Turkish and Iranian shelling, and Turkey’s limited invasion in February 2008, though technically aimed at Kurdish insurgent groups based in Iraq, have sent a strong message.

Nonetheless, Kurdish leaders continue to posture. The campaign slogan of Iraqi President Jalal Talabani’s Patriotic Union of Kurdistan Party for January’s provincial elections — “a safety valve for the unity of Iraq” — sounded more like a veiled threat. Arab tribes in Kirkuk and Mosul continue to accuse Kurds of attempting to change the demographics of the region by settling Kurds in the two cities, whereas Kurds say that they are simply reversing the “Arabization” policies of Saddam Hussein. In Mosul, the country’s third-largest city, car and suicide bombings remain facets of everyday life.

In the oil-rich Tamim province in north-central Iraq, of which Kirkuk is the seat, provincial elections were simply not held because of tensions over whether the city should be part of the largely Kurdish autonomous region. Every attempt to legislate the issue or hold a referendum since the U.S. invasion in 2003 has been tabled. Tamim’s fate probably will not be settled without bloodshed.

In addition to Tamim, four of the country’s other 17 provinces have yet to be “handed over” to the Iraqi government. The five provinces still under U.S. control — Ninewa, Tamim, Salahedeen, Baghdad and Diyala — represent more than 40 percent of the country’s population, and include the volatile and strategically important cities of Baghdad, Mosul and Kirkuk.

The U.S. military is supposed to consult its Iraqi counterparts on missions, but it appears to frequently receive a rubber stamp in the form of a few Iraqi soldiers. In some cases, U.S. forces appear to act without any consultation. Take, for example, the Jan. 23 raid in the town of Hawija, about 150 miles north of Baghdad, left a woman and her husband dead and their nine-year-old daughter injured

“In some cases, the U.S. Army did not inform the Iraqi authorities,” Askari said. “Soon we are going to meet with them to discuss that. We should not expect that violations won’t happen.” 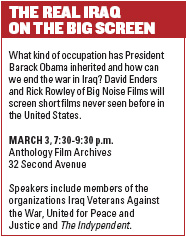