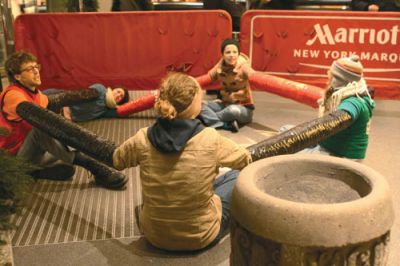 Anti-Zionist activists blockade the entrance to the Marriott Marquis Hotel at 47th and Broadway in Manhattan. They were protesting a $1,500-per-plate fundraising dinner for the American Israel Public Affairs Committee (AIPAC), the nation’s most powerful pro-Israel lobbying organization. Ten people were arrested during the action. PHOTO: VANESSA CHAN

Judy Rebick has received death threats, been screamed at, and been labeled a “self-hating Jew” for her outspokenness on the Arab-Israeli conflict.

But that hasn’t stopped her participation in any of the many Jewish-led and supported actions during Israel’s latest incursion into the impoverished Gaza Strip in Palestine.

“For people who embrace a progressive Jewish vision, Israel is against everything we believe in,” Rebick said. “They’re violating the Jewish tradition of progressive struggle, and their claim of being a victim is wrong.”

Rebick, who holds the Sam Gindin Chair in Social Justice and Democracy at Ryerson University and who founded rabble.ca, a progressive Canadian news website, was arrested along with seven other Jewish women after they occupied the Israeli consulate in Toronto Jan. 8 in an action against the Israeli bombing and invasion of the Gaza Strip, which killed more than 1,300 Palestinians and wounded at least 5,000.

Jewish peace activists in Montreal, San Francisco and Los Angeles have staged similar demonstrations at Israeli Consulates, highlighting the many Jewish voices around the world that are speaking out against continued occupation and war in Palestine in what is often a bitter and polarizing debate.

In New York City, Jews Against the Occupation-NYC (JATO) dropped antiwar banners near the Brooklyn-Queens Expressway and near the U.S.S. Intrepid, and another group of New York City Jews hastily organized a demonstration outside the Israeli consulate in New York Jan. 12 that drew around 1,000 people. On Jan. 29, 10 anti-Zionist activists, two of them Jewish and most of them college students, were arrested while trying to blockade the entrance to a Midtown hotel that was the site of a $1,500-per-plate benefit for the American Israel Public Affairs Committee (AIPAC), the nation’s leading pro-Israel lobbying group.

“[Israel] is the state that purports to be our homeland, and whether we feel that it is or not … its actions somehow reflect on Jews in general,” said Alisa Solomon, co-editor of Wrestling with Zion: Progressive Jewish-American Responses to the Israeli-Palestinian Conflict and a contributing editor to the WBAI radio show “Beyond the Pale: Radical Jewish Culture and Politics.” “It’s a very dubious and dangerous collapse when ‘Jew’ and ‘Israel’ are conflated,” Solomon said. “Anti-Semites do it a lot, and unfortunately, powers of the Israeli state do it as well.”

And while being a Jew who forcefully speaks out against Israel’s actions continues to be a minority position within the larger Jewish community, there is something of a generational shift among younger Jews away from attachment to Israel. According to a 2007 National Survey of American Jews, 54 percent of Jews younger than 35 are “comfortable with the idea of a Jewish state,” compared to 81 percent of Jews older than 65, who grew up with the memory of the Holocaust fresh in their minds.

“The shift is going to happen slowly in the Jewish community, very slowly,” said Ethan Heitner, 25, an activist with JATO and Adalah-NY: The Coalition for Justice in the Middle East. “There are starting to be cracks in the Zionist hegemonic viewpoint on things … [Activism] has to continue, it has to keep growing, even when things get quiet.”

Michael Letwin of New York City Labor Against the War supports terminating U.S. aid to Israel as well as a nascent divestment and sanctions movement against Israel modeled on the one that confronted apartheid South Africa during the 1970s and 1980s. He says he lost the presidency of his union, the Association of Legal Aid Attorneys UAW Local 2325, in the year after 9/11 due to his anti-Zionist views. Still he insists it is crucial for progressive Jews to speak out despite the possible consequences. “It’s very hard to be an anti-Zionist in this country … but there is space,” he said. “And to the extent that we can open that space, and keep pushing the envelope, I think there’s more opportunity sometimes than we think there is.”

Letwin also stresses the importance of Jewish activists doing Palestine solidarity work engaging in open and constructive dialogue with Jews who believe in Zionism and support the state of Israel.

Partnerships between Jews and Palestinians who protest Israel’s occupation are also essential “to break this myth that there’s no relationships available between these groups of people,” said Flo Razowsky, the U.S. coordinator for the International Anti-Zionist Jewish Network, an organization that was a key player in the Israeli Consulate actions in California. Razowsky, 34, was once the president of a Zionist youth group. She says she had a “strong relationship to Israel.”

“The simplest way to put it is to make an analogy between white-skinned people doing anti-racist work [with] Jews doing anti-Zionist work. … [Zionism] is a deadly form of racism based on a very specific identity,” Razowsky said. 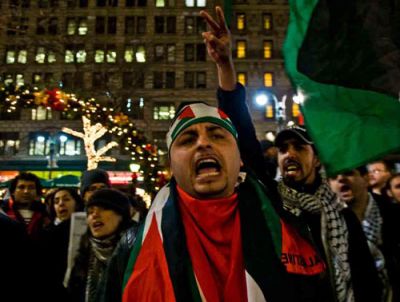 A Palestinian supporter speaks out at a rally in Bryant Park Dec. 29. PHOTO: JOEL COOK

To read more coverage on the Arab-Israeli conflict and related activism, click here.