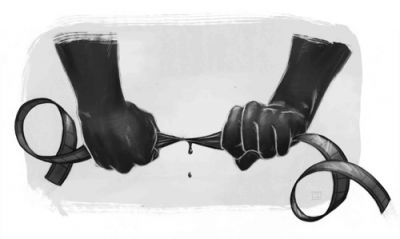 Once upon a time (and a heady and exhilarating time it was), ferment bubbled up through the nation, people declared that business would no longer continue as usual and movements coined slogans that felt like eternal truths. They said, “We shall overcome!” “We are everywhere!” “The personal is political!”

This year’s Academy Award nominations are a tribute to the movie industry’s ability to trivialize such truths. The majority of the nominations assert firmly that the political is personal, not vice versa. Consider the five films nominated for Best Picture:

Two, Frost/Nixon and Milk are based on significant events in U.S. history. Milk, the story of murdered gay San Francisco politician Harvey Milk, may be on its face the most political of the Oscar nominees, but only in the narrowest sense of the word. Charting Milk’s rise to elected office in the late 1970s during the gay liberation movement, despite furious opposition from what was beginning to coalesce as the Christian Right, Milk fails to set the gay movement in the context of the era’s other liberation movements and the resistance to them. It’s a failure that robs the film of the broader significance it might have had.

Two of the other Best Picture nominees go much further in their reductionism. The Reader, directed by Stephen Daldry, tells the story of a passionate affair between a 36-year-old German woman with a secret or two (Kate Winslet) and a teenage boy (David Kross). Some years later, as a law student, the youth attends a war-crimes trial of some former guards at the death camps, one of whom turns out to be his exlover. It seems that a connection is intended between the affair — and the youth’s family’s obliviousness to the turbulence in his life — and questions of collective German guilt and innocence. The connection, however, escaped this reviewer entirely. So, for that matter, did the motivations of most of the characters in the movie. What was lost in particular was the rationale for the central plot, the woman’s attraction to the not-very-appealing youth.

Perhaps the most curious case of depoliticization is The Curious Case of Benjamin Button, directed by David Fincher. With its account of an unusual child who grows up to experience the great events of his time but remains untouched by them, it has reminded many of 1995’s Best Picture, Forrest Gump. Like Gump, Button also features a story of a protagonist’s lifelong love for a beautiful but elusive woman. Based on an F. Scott Fitzgerald tale of an infant born old who grows younger over time, Button adds some wrinkles of its own. Abandoned at birth, the monstrously aged white baby Benjamin (played as an adult by Brad Pitt) is taken in and raised by a Black woman. As if the old-baby premise weren’t fantastic enough, the movie takes place in a New Orleans where Black and white people live, work and go to church together in happy harmony (and adding insult to apathy, ends, in a resolutely apolitical manner, as Hurricane Katrina makes landfall).

Finally, there’s a very different fantasy, the Oscar front-runner (and Golden Globe winner) Slumdog Millionaire, directed by Danny Boyle (Celador Films/Film4), a feel-good story of the appalling violence and filth in which millions of Bombay’s desperately poor live (and another tale of a man’s lifelong love for a beautiful, elusive woman). Jamal Malik (Dev Patel) also grows up an orphan, exploited by a gangster who runs, among other enterprises, troupes of beggar- children. Yet Jamal survives, miraculously learning enough to eventually become a contestant on the Indian version of “Who Wants to Be A Millionaire?” In this India, the poverty and its concomitants are facts of life, not consequences of history — indeed, the only Indian history the movie acknowledges is the construction of the Taj Mahal.

As always, there were better — and more deeply political — movies that never made it to the top of the Oscar heap. Doubt, director-playwright John Patrick Shanley’s provocative and gripping investigation into pedophilia and the clergy, earned four acting nominations but didn’t get a Best-Picture nod. Secrets of the Grain, the poignant, tender story of Tunisian immigrants in France by Franco-Tunisian director Abdel Kechiche, was made in 2007 but shown in the United States in 2008, making it ineligible for Best Foreign Film.

Also shut out of the Oscar race were two additional films more satisfying than all the nominees put together: Gran Torino, Clint Eastwood’s moving reversal of the violence-makes-the-man myth that made him famous, and Miracle at St. Anna, Spike Lee’s ghost story about an all Black U.S. battalion fighting in Italy during World War II. I guess we shouldn’t be surprised, given that no movie about African-Americans has ever won the Best Picture award, nor has any Spike Lee movie ever been nominated. There was, however, an earlier Best Picture about life in India — Gandhi won in 1983.

The envelopes will be opened Feb. 22.