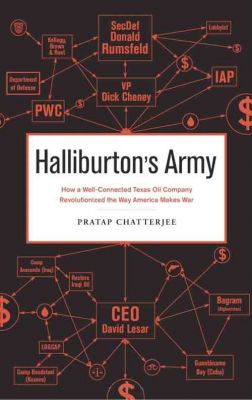 In 2004, antiwar activists pushed bright red booklets titled “Houston We Have a Problem” under the doors of hotel rooms where Halliburton shareholders rested before the company’s annual meeting. The booklets were alternative annual reports that detailed how Halliburton and its then subsidiary, KBR, overcharged taxpayers for services in Iraq, was under investigation for corruption and had used political connections to win no-bid and cost-plus contracts. Those contracts now total more than $30 billion.

The report’s author, Pratap Chatterjee of Corpwatch, a corporate watch-dog group, compiles years of reporting on Halliburton/KBR’s corporate malfeasance in Halliburton’s Army: How a Well- Connected Texas Oil Company Revolutionized the Way America Makes War. More than a laundry list of wrongdoings, the book shows how the symbol of a failed Iraq reconstruction effort achieved so little with so much money. As we move on from the Bush administration, this book helps to understand what really happened.

Halliburton subsidiary KBR won the bulk of contracts in Iraq before it was spun off in 2007. The Texas-based company began building military bases during the Vietnam War, when President Lyndon B. Johnson favored it in exchange for hefty campaign donations. KBR co-founder George Brown claimed LBJ described the deals as a “joint venture,” in which, “I’m going to take care of the politics and you’re going to take care of the business side of it.”

By 2003, Halliburton/KBR had a seat at the table when Pentagon officials planned the invasion of Iraq. When Congress approved the invasion in October 2002, the company’s managers were already hard at work building military bases. Chatterjee recounts how Halliburton/ KBR’s proposal to fix the Iraqi oil fields damaged by Saddam Hussein was never put up for bid.
Many of these contracts were costplus, which meant the government covered all expenses and guaranteed profits of two to seven percent. This was in addition to contracts to construct military bases, as well as basic services such as purchasing and serving food. These latter contracts fell under the military doctrine called Logistics Civilian Augmentation Program (LOGCAP), which allows civilian contractors to replace soldiers for kitchen duty and work done off the battlefield.
All of the contracts were won with minimal lobbying since Halliburton’s ex-CEO, Dick Cheney, was Vice President. Even when accusations of overcharging surfaced in 2004, Chatterjee notes the company’s annual lobbying budget was just $300,000.
Throughout the invasion and occupation, Chatterjee spoke to whistleblowers within the Pentagon and Halliburton who were upset about the waste and corruption they observed. They described how the company instructed them to purchase goods from favored suppliers even when they had lower bids from others. Chatterjee compliments their stories by combing through reports from the General Accounting Office. In one, he found that a $587 million contract had been approved in 10 minutes based on six pages of documentation.
Chatterjee had to do his own reporting on how people brought in from other countries, called “third country nationals,” were abused by subcontractors Halliburton hired to do the bulk of work outlined in these contracts. He traveled to bases in Iraq and visited workers from the Philippines and South Asia who did construction and staffed the cafeterias. One worker said, “We ate when the Americans had leftovers from their meals. If not, we didn’t eat at all.”
Chatterjee also provides numerous examples of KBR’s shoddy work, both on military bases and on Iraq reconstruction efforts. These problems may get more scrutiny now that Bush is gone. In January, Democratic Senators Robert Casey and Byron Dorgan argued a soldier’s electrocution death in Iraq due to faulty wiring was a “negligent homicide” by KBR. Still, Halliburton continues to suck billions from the federal teat. If we are to cut them off, we must first take stock of what they have (or have not) done, and Chatterjee’s book is the perfect guide.