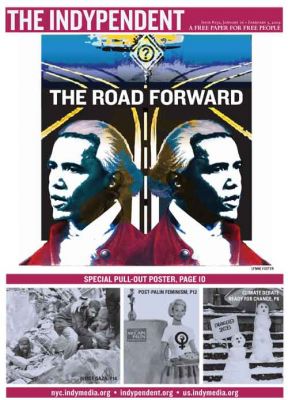 THE REALITY OF “THE DREAM”
Response to “American Dreams: Obama Harnesses the Seductive Appeal of an Abstract Ideology,” Jan. 16:

Good article, but I kept waiting and waiting for it to get to the point: That the “American Dream” is bullshit and will never happen for most people under a capitalist system that needs to exploit and accumulate profit, and it must be noted that the “American Dream” is happening on stolen, colonized land. The “Dream” is based on the backs of “third-world” peoples and is being paid for by massive amounts of unsustainable credit as working and middle-class people try to keep up with the “car in the garage, home in the suburbs, flat screen TV” lifestyle without the real wages to pay for it.
—Amilcar C

POWER FROM BELOW
Response to “Bolivia: A Model for Change,” Jan. 16:

One can see a huge difference between Morales and Correa. It seems a lot of that has to do with the power of Bolivian social movements. I also think it is very interesting to note that the Bolivian landless workers movement is opposing the new constitution, saying it doesn’t go far enough. That’s very good for democracy because even if the constitution passes there will still be pressures from below — the movement won’t be co-opted into government like with Venezuela. [Editors Note: See articles on pages 12 and 13]
—Jared

I think it’s insane for Obama and Israel not to negotiate with Hamas. How are you going to make peace if you won’t talk to your enemies? There is a well-known basic framework for what needs to be done in a peace deal, and the only alternatives to peace are endless war or ethnic cleansing.

People need to work for a just and lasting peace: a genuine Palestinian state, safety for Israeli civilians, an agreement on the status of Jerusalem, and a way to settle “right of return.” If you’re thinking in terms of “pro-Israeli” or “pro-Palestinian,” you’re thinking in the wrong terms.

In the final analysis, the people of Gaza, Palestine, Israel and the areas around it are ruled by governments who gain more by conflict than by peace. They will keep being killed and remain poor until they learn that a war economy is foisted on them by gangsters cloaked as politicians.
—Kohli Singh

It is fascinating to see where these “conservative” women are heading to. I happened to come cross Chris Mathew’s [Oct. 18] interview with Rep. Michele Bachmann (R-Minn). She requested the media to do an investigation of all Democrats and Independents in the Congress to see who is “pro-America” and who is not.

Her self-assertion and self-righteousness come across as someone who comes from another world centuries ago. I am happy to know that voters have spoken, that the majority wants a progressive country. I wish that GOP and this brand of feminists could see that too.
—Kate

As a 70-year-old male, I do not feel threatened by Sarah Palin. Rather, I get the feeling that with Sarah, and, hopefully several more like her, the Republican Party may have a chance to regain its integrity.
—Papasnake

Once again, Republicans exhibit an uncanny way to take words, like “feminism” and twist them to be the opposite. One more Orwellian language grab. “Free market feminism” is bizarre. Much of the revisionism is based on not knowing history.