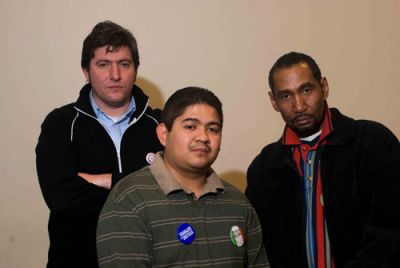 Within days of being fired, more than 200 workers at the Republic Windows and Doors factory in Chicago took action. With support from several labor unions, the workers occupied their plant Dec. 5, 2008, demanding that they be paid owed vacation and severance checks.

The occupation ended victoriously six days later when Bank of America and other lenders to Republic agreed to pay the workers the approximately $2 million owed to them.

But the workers did not stop there. They are now seeking ways to restart the factory — which manufactures heating efficient windows and doors — and potentially operate it as a worker-run cooperative. The workers are also filing charges against Republic for failing to give them sufficient notice of plans to shut the factory down; the workers were only given three days’ notice and the management refused to negotiate with the workers’ union about the closure.

The United Electrical Workers (UE) — the union the Republic workers belong to — announced Jan. 14 that California-based Serious Materials, a highly successful company in the green, heating-efficient window market, will likely buy the Republic and Windows and Doors’ assets, thus putting the workers back to work.

“We are all hopeful about the possibility of Serious reopening our plant. This would be a very happy ending to our struggle,” said former Republic worker and Local 1110 Vice President Melvin Maclin in a Jan. 14 press release.

In this interview, UE International Representative Mark Meinster talks about his role as the coordinator for the plant occupation, connections between the struggle of the Republic workers and workers’ campaigns and tactics in South America, the fight to re-open the factory, and how what happened at the small Chicago factory may have set a tone for the role of social change in an economic downturn.

BENJAMIN DANGL: Please briefly describe your role in the union, in the occupation of the Republic Windows and Doors factory, and the ongoing struggle of the Republic workers.

MARK MEINSTER: I’m an International Representative for the United Electrical Workers (UE). My primary responsibility is to oversee the union’s organizing work and staff in Chicago, Ill., and Milwaukee, Wis. I was the lead organizer on the effort to organize the Republic workers into UE in 2004 and led negotiations for a first contract in 2005. Since then, I and UE Field Organizer Leah Fried, have worked with the local [union] on leadership and steward training, grievance handling and contract negotiations. I coordinated the plant occupation at Republic Windows and Doors and participated in negotiations with the employer and the financial institutions involved and continue to work on efforts to reopen the plant. 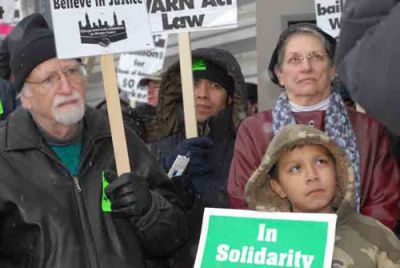 NO WAY: Republic Window and Door workers received widespread support during their Dec. 5–10 occupation of their closed factory in Chicago. PHOTO: CHRIS GEOVANIS

BD: Could you please talk about some of the connections you see between the Republic workers’ struggle and actions and the strategies and experiences of similar workers groups in Argentina and Venezuela and the landless farmers in Brazil? How did you learn about these struggles and come to apply them in Chicago as a union organizer?

MM: Obviously there is a long history of workers taking actions of this type, both within the U.S. and in other countries. Because there have been very few plant occupations in the U.S. since the 1930s, we needed to look to workers’ struggles in other countries for recent guidance. For example, the Canadian Auto Workers, who have engaged in similar actions over the past twenty years to protest plant closings and win severance benefits, provided us with invaluable technical advice.

But in many respects, workers’ struggles in Latin America were the biggest inspiration for the Republic occupation. I had read about the land occupations carried out by the Movimento dos Trabalhadores Rurais Sem Terra (MST) in an interview with Joao Pedro Stedile in 2002. I was struck by the MST’s focus on popular education and leadership development, and especially the way they placed the occupation tactic within the context of the right to unused land enshrined in the Brazilian constitution. The occupation, although technically an illegal tactic, was used to enforce a legal right. This gives workers confidence and places the struggle on a moral plane, allowing for more significant community and political support. We drew on this concept in planning the Republic occupation.

Current UE Local 1110 President Armando Robles attended the World Social Forum in Caracas, Venezuela, in 2006. There he heard from workers from Inveval, a “recovered” factory in Venezuela. They had inspired a movement of workers occupying and running factories, with the help of the government that had been abandoned by bosses who had fled the country. Armando returned from that experience politicized and inspired. I visited Venezuela in 2007 and spent time visiting worker-run co-ops. I was struck by the workers’ investment in the revolutionary process and their ability to run production without management.

We drew on the Argentine factory occupations to the extent that they show that during an economic crisis, workers’ movements are afforded a wider array of tactical options. Militant action can win public support during a downturn in ways that would have been impossible before. In fact, the film The Take was screened in the factory during the occupation in a makeshift movie theater set up in the locker room.

BD: Is there a plan to transform the Republic factory into a worker-run cooperative? If so, how did the decision to do this come about? At this point, how is the process going of setting this up?

MM: At this point we are working to find a buyer for the factory, focusing on firms specializing in energy efficient windows. Though we are also exploring the idea of a cooperative enterprise, the fact that no real movement of worker-run enterprises exists in the U.S. makes this option much more difficult at this point. The workers have set up an entity, called the “Windows of Opportunity Fund,” to help provide technical assistance and to study this and other possibilities for re-starting production.

BD: Could you comment on the role the Republic workers’ struggle in inspiring workers across the United States to take up similar tactics to confront unemployment and problems related to the current U.S. economic downturn?

MM: I think the Republic struggle shows we can win support for bold tactics, especially when we think carefully about how we project the struggle to the public. Time will tell whether the Republic struggle will be viewed as a bell-weather event or a flash in the pan. On the one hand, the occupation led to a huge outpouring of support — from solidarity rallies all across the country to donations of money, food and essential supplies. That this support was on a scale unthinkable only a year ago is proof that this action spoke to the desire of working class people to seek ways to resist the current economic onslaught. On the other hand, for this event to be a spark, others will have to pick up the baton. That means organized labor will have to take some measure of risk, embracing militant tactics when necessary and abandoning its reliance on political maneuvering as the primary means for the advancement of a working class agenda.

Benjamin Dangl is the author of The Price of Fire: Resource Wars and Social Movements in Bolivia (AK Press). He is the editor of TowardFreedom.com, a progressive perspective on world events, and UpsideDownWorld.org, a website on activism and politics in Latin America. 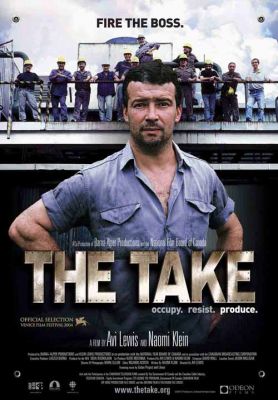 TAKING ON THE SYSTEM
In the shadow of economic collapse in Argentina in 2001, workers took action to fire up factories that had shut down when the bosses and capital investment split overnight. Filmmakers and authors Avi Lewis and Naomi Klein captured the moment 30 unemployed auto-parts workers took back their factory. In a personal clash of capitalism versus collectivism, the documentary The Take tells the story of what can happen when workers refuse to be victims of the system. Underneath an economic system that favors profits over people, a social justice movement continues to grow.