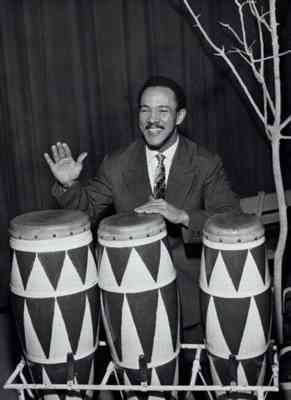 One of the most famous sons of Spanish Harlem, Joe Cuba, has died at the age of 78. In the 1960s the conga player and bandleader pioneered a style of music known as boogaloo that mixed Latin rhythms and R&B. His hits included “Bang Bang” and “El Pito (I’ll Never Go Back To Georgia).”

“Joe Cuba’s Sextet became popular in the New York Latino community precisely because it fused a bilingual mix of Afro-Caribbean genres blended with the popular urban rhythm & blues of its time creating a musical marriage between the Fania and Motown sound,” writes music historian Aurora Flores.

Singer Chio Feliciano told the Latin Music Examiner, “Joe’s success was primarily due to his incredible and visionary way of playing the congas and for weaving never-before-heard percussive layers into his brew.” Feliciano was a longtime singer in the Joe Cuba Sextet.

Joe Cuba was born “Gilberto Calderon” in 1931 in Spanish Harlem to Puerto Rican parents. He long identified with the barrio and Nuyorican culture.

“Through his music, Joe brought together Latinos and African Americans and his art form reflected the influences of both cultures,” said East Harlem’s councilwoman Melissa Mark Viverito. “Furthermore, his music united Harlem and East Harlem by reflecting the growth both communities experienced during the 1960s and ’70s.  Joe Cuba made Spanish Harlem proud as he bravely brought his particular New York Latino identity to stages all over the world.”

Cuba was inducted into the International Latin Music Hall of Fame in 1999.

He died on Sunday from complications of a persistent bacterial infection at Mount Sinai Medical Center.