At the very northern tip of New York State, far beyond the wealthy counties that surround the Big Apple, winters are bitter cold and the farm economy is long gone, replaced by discount stores and cut-rate malls. It’s poor country, and nowhere is poorer than the area along the wide St. Lawrence River.

The river is the boundary between the United States and Canada — except for one small stretch, near the town of Massena, where the St. Regis Mohawk Reservation straddles the river and international relations are superseded by tribal law. Here, for five dollars, local whites and Indians alike play bingo in the hope of a payoff that will stave off the bill collectors for a little while or even finance a new, double-wide trailer. Here, too, are opportunities for even bigger payoffs from cross-border smuggling enterprises — if the smugglers can evade law enforcement officials who lie in wait just outside the reservation.

And here, in Frozen River, the wrenching — and rivetingly suspenseful — first film by writer-director Courtney Hunt, Ray Eddy (Melissa Leo), one of Upstate’s hard-scrabble whites, wakes up one morning a few days before Christmas to find that her recovering gambler husband Troy has slipped — big-time.

Troy has run off, leaving her with their two sons and taking one car and Ray’s savings for the new double-wide that was due to be delivered Christmas Eve. She goes to the reservation to look for him at the bingo parlor, but finds only the abandoned car, just in time to see a stranger drive it away.

Furious, Ray chases the car down, which is how she meets Lila (Misty Upham), a Mohawk woman in many ways her counterpart. Lila is a widowed mother desperate for money to get back her child, who’s been taken from her by her wealthier Mohawk in-laws. Ray is desperate for four thousand dollars to pay for the new trailer. Lila knows of a smuggling 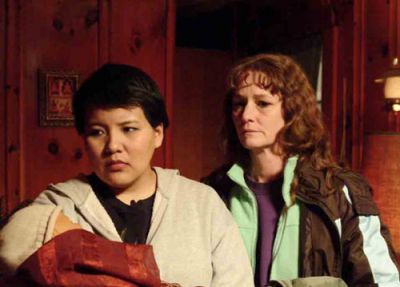 ring that sneaks undocumented immigrants into the Canadian side of the reservation and then offers good money for someone to drive them across the ice of the frozen St. Lawrence and into the United States. Little as Lila trusts white people, she needs someone white to drive the car, so the New York State troopers won’t stop it when it leaves the reservation.

So, very reluctantly, Ray and Lila agree to work together, in the face of formidable odds that include the unreliable and potentially deadly ice they must cross, the troopers waiting if they survive the crossing, and the high likelihood that their employers will pay less than the promised fee if they do arrive with their human cargo. Frozen River is the account of their brief but life-changing partnership.

I would have given Frozen River both awards, for best actress in a leading role and best screenplay. I would have chosen director of photography Reed Morano’s capture of the bleak junkyard-cluttered winter landscape for the cinematography award.

And finally, instead of Slumdog Millionaire — which took the top award — I would have named Frozen River best picture of 2008.