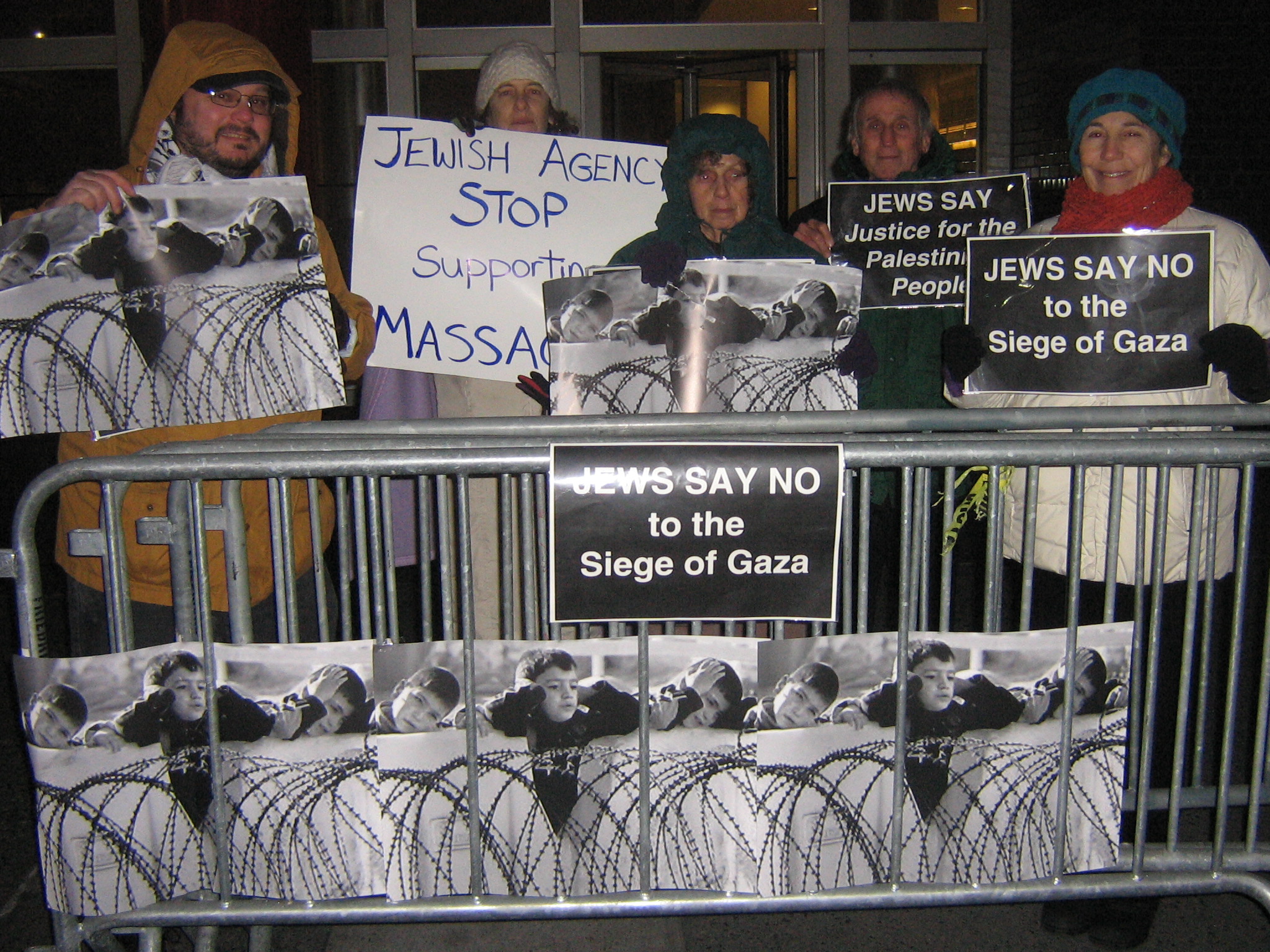 About 900 New York City Jews participated in a twenty-four hour protest outside the World Zionist Organization and Jewish Agency offices on 3rd Ave. between 40 and 41st St. in Manhattan, calling for justice for the Palestinian people and an end to the occupation of Palestine.

The demonstrators came in waves throughout the day, with some braving the cold and sticking it out overnight.  The action was the latest in a series of Jewish protests speaking out for peace in Israel/Palestine and against the continuing blockade of the Gaza Strip.  In a recent action on February 11, Jews Against the Occupation dropped banners that read “Free Palestine” in 5 different locations.

“The most recent crimes of the Israeli government against Palestinians in Gaza has compelled me for the first time in my entire life to speak out as a Jew,” said Nina Felshin, an anti-war activist who has been involved with the movement to free Mumia Abu-Jamal.  Felshin added that she was “opposed to nations that feel better than other people,” and that Israel was not “speaking for all Jews.”

The World Zionist Organization and the Jewish Agency were targeted for its unwavering support of the Israeli government’s actions and policies.

“As a child of Holocaust survivors and as a Jew I reject the World Zionist Organization and the Jewish Agency’s defense of Israel’s barbaric conduct in Gaza,” said Jane Hirschmann, one of the protesters who helped organize the action, in prepared testimony.  The recent 22-day long assault on Gaza killed more than 1,300 Palestinians and wounded at least 5,000.  10 Israeli soldiers and 3 civilians were killed in the same time period.  Israel has continued to maintain a suffocating blockade on the Gaza Strip.

Throughout the day, as the demonstrators held up signs that read, “Jews Say No to the Siege of Gaza,” and “Jews Say Justice for the Palestinian People,” protesters enacted and spoke about what a day in the life of a child living in Gaza is like.

The protest was organized by a newly formed group of Jewish peace activists called “Jews Say No.”

The election of a “right-wing government [in Israel] will expose what has happened at the core of Israeli society,” said Gayle Kirshenbaum, who said she came to the protest because as a mother of a seven-year-old, she “found it intolerable to watch the Israeli Army bomb Gaza’s children.”

The recent elections in Israel saw the Kadima Party, headed by Tzipi Livni, barely edge out Benjamin Netanyahu’s Likud Party, but the makeup of the next governing coalition remains unclear.  Both Netanyahu and Livni wholeheartedly supported the invasion of Gaza.  The extreme right-wing Yisrael Beiteinu party, or “Israel Is Our Home” party, came in third place.  Their candidate, Avigdor Lieberman, has proposed that all Israeli citizens take a “loyalty test,” and in 2006, he called for executing any Arab members of the Knesset who met with the democratically elected Hamas government.

Solidarity statements in support of the demonstration from activists in Israel and Palestine were read during the protest.  One statement by Nabila Espanioly, the director of the Al-Tufula Center for Women and Children in Nazareth, read, “As a Palestinian citizen of Israel I join you in your demand: not in my name, not with my tax money. After the election in Israel, I believe today it is more important than ever to sound your voice.”  Another statement read came from Ruchama Marton, the President and Founder of Physicians for Human Rights in Israel, and read, “When Jews, especially American Jews, say NO to what the Israeli government is doing, it is a beacon of hope for the Israelis, Jews and Palestinians who oppose Israel’s war mongering policy.”

“The unwillingness of Israel to adhere to international law is disturbing,” said Alan Levine, a civil rights lawyer. “International law doesn’t excuse Israel or any other country.”

For a related article in the latest issue of the Indypendent, titled “Jewish Rebels Rally Against Zionism,” click here.