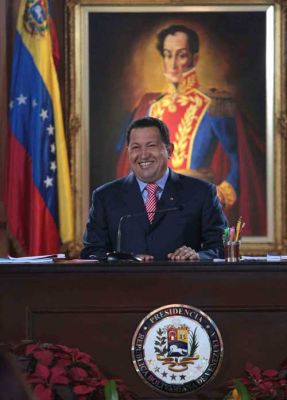 The decisive victory (55 to 45 percent) that President Hugo Chávez and his movement achieved Feb. 15 in favor of amending Venezuela’s constitution so that Chávez may run for president again in 2012, represents an important victory for the effort to create socialism in this oil-producing Latin American nation.

WHAT THE VICTORY MEANS

Given the importance of Chávez for leading the Bolivarian project to its conclusion, the Feb. 15 victory is extremely important for Venezuela and for creating a real progressive alternative to capitalist democracy as usual.

As the sociologist Max Weber pointed out about 100 years ago, there are times when charismatic leaders are necessary to break through the ossified social institutions in order to create something new. Examples of this type of charismatic leadership would be Lenin, Mao, Gandhi, Martin Luther King, Jr., or Nelson Mandela. This is not to say that Chávez is on a par with these leaders in every respect, but he probably is with respect to his ability to lead and inspire. And such leadership should not be wasted if a people democratically decide that the cost of losing such leadership far outweighs the possible benefit of maintaining term limits.

The recent referendum victory becomes all the more important if we consider that the world is currently entering its worst economic crisis since the Great Depression 80 years ago. In that era, people were desperate for an alternative to capitalism and there is no reason to believe that a similar development will not take place this time around. Viable alternatives to capitalism, whether under the heading of 21st century socialism or some other name, will become increasingly important. For better or worse, Chávez has become one of the few leaders in today’s world to forge a path in this direction.

However, the Bolivarian movement’s dependency on Chávez makes it somewhat fragile. If anything were to happen to Chávez, the movement would probably fall apart into its component parts in no time. Given this fragility, questioning the leader is quite difficult because criticism rapidly threatens to undermine the movement’s stability and main strength. As a result, debate within the movement tends to be possible as long as it does not question the leader’s decisions or opinions. This, in turn, makes movement self-criticism difficult and makes the potential for errors greater.

TASKS FOR THE NEXT PERIOD

One of the first tasks for the Bolivarian movement is that it must continue to develop the United Socialist Party of Venezuela (PSUV) the successor to the coalition of Left parties that originally brought Chávez to power. A strong PSUV would enable the Bolivarian movement to become less dependent on Chávez and more stable and more open to wide-ranging debate. This means developing alternate leaders and strengthening party structures so that the whole party is more movement-driven and less leader-dependent.

Second, as Chávez himself recognized during his victory speech, his government must take the fight against insecurity and Venezuela’s high crime rate far more seriously. The government needs to complement poverty reduction with other measures in order to reduce crime. Along with the fight against crime also belongs the general fight against corruption and increasing the state’s efficiency and effectiveness.

Third, with the price of oil declining, Chávez’s government will have to find ways to strengthen its efforts to create social justice with less oil revenue. This would probably either mean going into debt so as to stave off a recession and/or taxing the country’s rich far more heavily.

Finally, the fourth outstanding task for the next period is the deepening of participatory democracy against the resistance of Chavismo’s mid-level managers: the ministries, mayors and governors. If popular power, as the system of direct democratic communal councils is often known, is the heart of Bolivarian socialist democracy, then this will be the true testing ground for the viability of an alternative to capitalist democracy.

So far, the communal councils have achieved much, but only in their own localities of 200 to 400 families. The real challenge, which Chávez has repeatedly announced, but which has yet to happen, is to bring these structures to a higher level, to the municipalities and perhaps even to state and national level. However, as many have observed, this is going to be difficult because few mayors and governors are willing to let go of their power.

If Chávez and his movement manage to tackle these four tasks in the next two to four years, then the future of Bolivarian socialism will be bright indeed. Even though Chávez won this referendum, the upcoming period is going to be quite short because if these tasks are not tackled successfully before the end of 2010, then Chávez faces the real possibility of losing his two-thirds majority in the National Assembly, or perhaps even his 50 percent majority, which would be a devastating blow.

If things should go very wrong, such as if the economy were to crash for some reason (this does not seem likely, but cannot be discounted), then Chávez could even face a recall referendum in 2010. Should he weather these hurdles, though, the next real test will be the presidential election in late 2012.

The term limit referendum bought Chávez and his movement more time to complete the Bolivarian socialist revolution. However, Chávez must deliver significant change in a relatively short amount of time if this project is to succeed in the long term.

This article was adapted from a longer version that originally appeared on venezuelanalysis.com. Gregory Wilpert is the author of the book, Changing Venezuela by Taking Power: The History and Policies of the Chavez Government (Verso, 2007).