By Rinku Sen and Fekkak Mamdouh

After Sept. 11, 2001, the immigration debate raging on in Washington took a turn for the worse. Immigrants were cast as a threat to national security, increasingly becoming associated with law-breakers, criminals and terrorists. The framework of immigration reform became one of enforcement and policing, evident through the passage of the USA PATRIOT Act and the creation of the U.S. Department of Homeland Security not to mention the renaming of the U.S. Immigration and Naturalization Service to Immigration and Customs Enforcement (ICE).

Addressing the shift in the immigration debate post Sept. 11, The Accidental American, co-authored by Rinku Sen, publisher of ColorLines magazine, and Fekkak Mamdouh, is an ingenious amalgamation of personal narrative, historical context and thorough policy analysis.Weaving in the history of neoliberal policies in third world countries, Sen and Mamdouh underscore the global movements that force people to migrate, defying the argument that immigration can be “fixed” by sheer enforcement.

In 2008, 345,710 immigrants were deported from the United States, nearly double the 195,000 deported in 2006. Yet mass deportations and workplace raids have done little to stem the large waves of immigration. Employing criminal tactics toward immigrants has in fact perpetuated mistreatment and discrimination, encouraging the idea that civil and constitutional rights come only with citizenship. 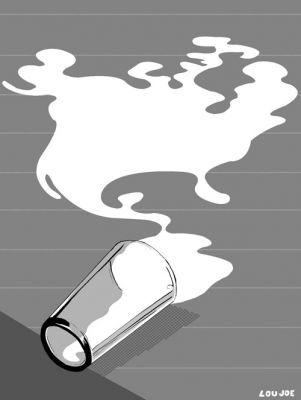 The book tells the story of Mamdouh, a former employee at Windows on the World, the restaurant on the 107th floor of the World Trade Center. It traces his and his co-workers’ struggle trying to reestablish their lives in a post-9/11 society where anti-immigrant fervor was rampant. Their struggle culminates with the creation of the Restaurant Opportunity Center of New York (ROC-NY) founded by Mamdouh, who had worked with his union to provide temporary relief to the families of his 73 fallen co-workers, and Saru Jayaraman, an experienced organizer at the Workplace Project. ROC-NY’s series of campaigns against exploitative restaurant owners confronted the discriminatory and racial hierarchies rooted in much of restaurant industry culture — back-of- the-house employees tended to be immigrants and people of color, while front-of-the-house employees were mostly white.

The personal story of Mamdouh combats the xenophobic principle behind immigration policy — that immigrants threaten the authenticity of American culture. The growth of ROC-NY beyond an immigrant core to include native-born and white workers, shows that immigrants and native-born workers can be united through the collaborative struggle against systematic oppression.The exploitation of immigrant laborers is a rallying point through which ROC-NY is able to challenge institutionalized labor practices. The inclusive nature of ROC-NY becomes a model to view immigration, yet the current debate remains narrowly focused on undocumented workers who need to be punished for “breaking the law.” The Accidental American challenges the notion of immigrants as the mejicanos working the back kitchens. Immigrants are not merely a static, sedentary workforce, but people who look for ways of political and social empowerment.

The Accidental American analyzes immigration on multiple levels, taking into account the geopolitical contexts that led to mass migrations, a facet largely ignored in mainstream accounts of immigration. Sen and Mamdouh contextualize migratory flows within the larger globalization process that establishes a free flow of capital and corporations yet inhibits the free flow of workers. Free trade agreements with developing countries, like the North American Free Trade Agreement (NAFTA), privatized state functions for the benefit of the capitalist class, meanwhile displacing a whole class of peasants and rural workers. And the policies of the International Monetary Fund (IMF) provide an incentive for debt-ridden countries to embrace neoliberal reforms.

Sen and Mamdouh provide us with an alternate framework for looking at immigration reform. They suggest the equalization of power between workers and corporations, the expansion of legal immigration to protect the rights of immigrant workers, the building of transnational public welfare systems and global labor rights, and the free movement of workers, not just corporations.

Critiquing immigration using the lens of neoliberalism allows us to take a holistic look at the common plight affecting the working class — whether immigrant or not. The Accidental American inverts mainstream arguments that shape current immigration debate into one of xenophobia, U.S. hegemony, and social exclusion that centers on a policy of enforcement. Tackling what is inherently wrong and broken in the immigration system can become a point of empowerment for other groups as well.

The book reminds us that no one is “naturally” American; whether by a twist of fate, a lucky draw or forces beyond our control, there is an element of accident in every American’s story.