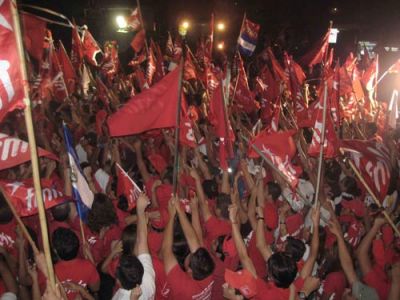 ABOUT TIME: Thousands of people celebrate the election of Mauricio Funes, the first leftist party president in the history of El Salvador. PHOTO: AMANDA AQUINO

On March 15, the Farabundo Marti National Liberation Front (FMLN) became the first leftist party to clinch a presidential election in the history of El Salvador. By 10 p.m., it became clear to Salvadorans and to the world that the former guerrillas had ended more than 130 years of oligarchy and military rule over this Central American nation of seven million. In the streets, thousands of red-shirted sympathizers chanted “¡Si Se Pudo!” (“Yes, We Could”), while they celebrated the victory of the FMLN’s Mauricio Funes.

Funes captured 51 percent of the vote, to 49 percent cast for Rodrigo Avila of the Nationalist Republican Alliance party, which had been in power for 20 years.

Though Funes, a former journalist, is the best-known Salvadoran on his country’s TV networks, he is little known outside the region. Thanks to a collaboration between The Nation and New America Media, reporters Roberto Lovato and Josue Rojas had the opportunity to interview El Salvador’s next president on the night of his election. What follows is an excerpt from this interview with Funes, who addressed numerous issues: the meaning of his presidency, El Salvador’s relationship with the United States, immigration and other domestic and foreign policy concerns.

Immigration has become one of the defining issues of the U.S.-El Salvador relationship. How will your administration’s approach to this issue differ from that of the outgoing Saca administration? 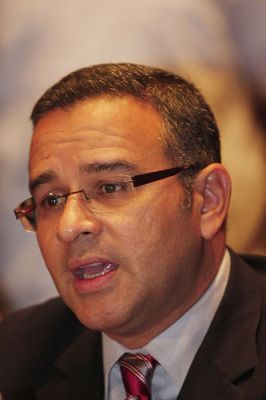 Mauricio Funes: The fact that we’re going to rebuild the democratic institutions — enforce the constitution and make of El Salvador a democratic state that respects the rule of law — is the best guarantee to the United States that we will significantly reduce the flows of out-migration. Salvadorans who leave to go to the United States do so because of the institutional abandonment, the lack of employment and dignified ways to make a living. This forces them to leave in search of new possibilities in the U.S. It’s not the same for us to ask the U.S. government to renew TPS [temporary legalization] without a Salvadoran effort to avoid further migration flows, and to do so from a position in which we have undertaken efforts to reduce the migration flows.

To read the rest of this article please visit newamericanmedia.org or thenation.com

The article was originally published on newamericanmedia.org and thenation.com. Roberto Lovato, a frequent Nation contributor, is a New York-based writer with New America Media. Josue Rojas is a reporter for New America Media.