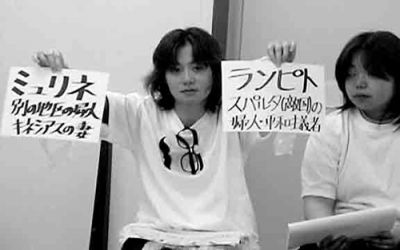 NO SEX FOR YOU: Women in Tokyo (top) and New York City (bottom) perform readings of the play Lysistrata in 2003 as a way to protest the attack on Iraq. PHOTOS: AQUAPIOFILMS.COM

A sparrow lies on his back in the middle of the highway. A passing horseman asks what he’s doing, and the sparrow answers, “I heard that the sky was falling, so I’m holding it up.”

“Do you really believe you can hold up the sky with those little legs?” asks the horseman.

“We do what we can,” says the sparrow.

Operation Lysistrata begins with the fable of the sparrow, related by Arab-American actor F. Murray Abraham. It goes on to tell the exuberant story of how, on the eve of war in 2003, two women in New York City organized an unprecedented “world-wide theatrical act of dissent.”

In January 2003, the Bush administration was rattling its sabers and trying to persuade the nation and the world that attacking Iraq was a good thing. On the other side of the political fence, antiwar activists were organizing to demonstrate against the war, and it was from that side that actors Kathryn Blume and Sharron Bower imagined a different kind of protest. They decided to stage a call to resist in the form of a reading of Lysistrata, Aristophanes’ hilarious and wildly bawdy account of a sex strike by the women of Greece to force the Greek men to end the Peloponnesian War. Then Blume and Bower wondered if anyone else, anywhere else, wanted to hold another reading, and the Lysistrata Project was born. On March 3, after nearly two months of non-stop international emails, phone calls, and website postings, more than 1,000 performances or readings from Lysistrata took place in 59 countries. 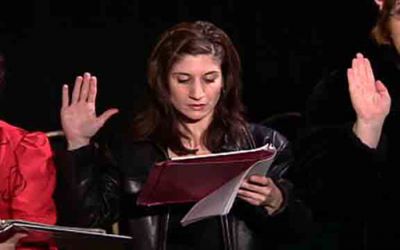 Videos and film from many of those events, along with interviews with Blume, Bower and other wellknown, lesser-known and amateur actors, have been put together to make up Operation Lysistrata, the documentary.

Playwright Tony Kushner and Living Theater co-founder Judith Malina discuss the worldwide significance of the Lysistrata Project. A woman in Singapore describes a reading that neatly evaded a local law banning political gatherings or protests by more than three people. A teenager in the Midwest United States re-enacts the performance he put on in his living room, with his collection of plastic dinosaurs taking all the parts. A group of Chinese actors reading the play are reluctant to reveal their names, or even to say where in China they’re holding the event. Kurdish refugees in a refugee camp in Patras, Greece, hold a reading by candlelight when their electricity fails, and an actor in Havana talks about the importance of theater as protest.

And from across the globe, large and small casts of embrace-evading women and men wearing rubber or plastic or leather phalluses romp across stages, repeating Aristophanes’ descriptions of men making war and women doing what they can to stop it, even if doing what they can consists of reluctantly refusing to participate in “the sweetest thing in all the world.”