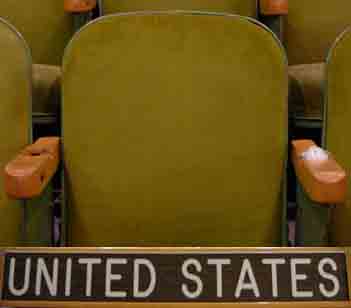 After taking part in preparatory discussions, the Obama administration announced on Feb. 27 that it would boycott the U.N. World Conference against Racism, Racial Discrimination, Xenophobia and Related Intolerance to be held in Geneva, Switzerland, April 20-24.

Also not participating are Canada, Italy and Israel, all close U.S. allies. Nonetheless, delegates from many nations are scheduled to meet in Geneva as a followup to the first conference, Durban I, held in Durban, South Africa, in September 2001.

The State Department said the United States was withdrawing because it objected to language affirming the Durban I conference call for reparations for slavery. The Department also stated that the conference “must not single out any one country or conflict.”

This statement is widely seen as referring to Israel. In 2001, the official U.S. delegation walked out of Durban I after a draft declaration included language referring to “ethnic cleansing of the Arab population in historic Palestine” and described Zionism as being “based on racial superiority.”

A revised draft was released on March 17 that removed references to Israel but as The Indypendent went to press the White House had not changed its position.

Lobbying against U.S. participation were pro-Israel groups, such as the American Israel Public Affairs Committee, which said, “President Obama’s decision not to send U.S. representation to the April event is the right thing to do and underscores America’s unstinting commitment to combating intolerance and racism in all its forms and in all settings.”

Many observers were critical of the U.S. withdrawal, however. Jared Ball, who sought the Green Party presidential nomination in 2008, told The Indypendent that the White House’s refusal to participate “is another in a series of acts which demonstrate [Obama is] an appointee of the most elite elements of this nation to re-brand a weakening U.S. empire.”

Nora Barrows-Friedman, co-host of Flashpoints on Pacifica radio, commented, “It is not surprising that the Obama administration is taking steps to distance itself from criticism at the Durban conference.” She said the U.S. withdrawal is a reaction to the “growing global outrage in civil society against both the United States’ entrenchment of its lethal occupations and wars against Iraq and Afghanistan and Israel’s expanding projects of occupation and genocidal actions in Palestine.”

Barrows-Friedman added, “Israel’s systematic racism against the indigenous, occupied and dispossessed people of Palestine continues to have the full support of the U.S. government.”

Over the last four decades, the United States has vetoed scores of U.N. resolutions regarding Israel, and Israel is currently in violation of at least 28 Security Council resolutions.

Recently, the president of the Israeli Association for Civil Rights said, “Israeli society is reaching new heights of racism that damages freedom of expression and privacy,” and last year the group reported that Israel’s occupation is “reminiscent of the apartheid regime in South Africa.”

Ball argues that even with a Black president, the United States is unable to come to terms with the legacy of slavery, colonialism or modern-day racism. Obama’s boycott, he said, “is further evidence of the fact of his blackness having nothing to do with his politics and less to do with his ability to articulate, defend or advance the causes and struggles of African-descended people here or abroad.”

The U.S. withdrawal is of significant concern because it is happening at a time when there is “exponential growth in hate crimes, ethnic tensions and other manifestations of … racism,” according to journalist and analyst Roberto Lovato.

Within the United States, the Southern Poverty Law Center reports that the number of hate groups “continued to rise in 2008 and has grown by 54 percent since 2000 — an increase fueled last year by immigration fears, a failing economy and the successful campaign of Barack Obama.” The center also reports “a 40 percent growth in hate crimes against Latinos between 2003 and 2007.”

Another concern is racism within the U.S. prison system. One in every 31 adults, or 7.3 million people, are now in the US corrections system, and a disproportionate number are Latino and African-American. In a recent study titled “Decades of Disparity: Drug Arrests and Race in the United States,” Human Rights Watch documented the “structural racism” of the prison-industrial complex.

Ball asserts that because a “pro-Israeli lobby” was able to “influence a Black president out of a global conference against racism and out of an international discussion of reparations for enslavement … only wide-ranging and well-organized social movements can produce the ‘change we can believe in,’ not marketing campaigns and well-crafted speeches.”