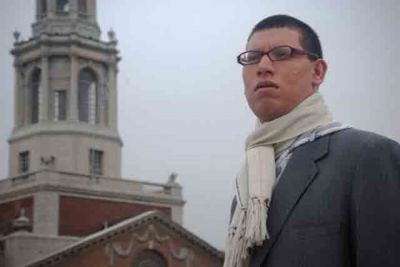 FAMILY FREEDOMS: Washington Heights resident and U.S. citizen Nicolas Nuñez, 19, is one of many young people speaking out about how U.S. immigration policy is ripping families apart. His father was deported to the Dominican Republic in 2005. He joined a delegation of immigrant rights organizations to Washington, D.C., March 3 to lobby for the Child Citizen Protection Act, which was introduced into the U.S. House of Representatives in January. PHOTO: MARK BAILEY

Napolitano said she was not aware of the raid and ordered a review of ICE and its enforcement policies.

“The president believes we must respect due process and our best values as we enforce the law,” said White House spokesperson Nick Shapiro Feb. 26 in The Washington Times. “The real answer to our broken immigration system is to fix it. The president has said that we will start the immigration reform debate this year, and this continues to be the plan.”

Undeterred by the raid, immigrant-rights activists are intent on holding President Obama accountable. On March 3, immigrant-rights organizations and families directly affected by deportations lobbied in Washington, D.C., for a bill that would give immigration judges discretion in deportation cases involving the separation of families with children who are U.S. citizens. Congressman Jose Serrano (D-NY) reintroduced the Child Citizen Protection Act (CCPA) in January. The bill was first introduced in 2006 but failed to rally enough support to become law.

Human Rights Watch reported that more than 1.6 million families have been separated due to deportations since the passage of the 1996 immigration laws.

Participating in the lobby day were 60 individuals with Families for Freedom, the Northern Manhattan Coalition for Immigrant Rights and the American Friends Service Committee, who met with 25 legislators or their staff March 3, sharing personal testimonies, news articles and Serrano’s letter of support. In solidarity, Homies Unidos, a Los Angeles-based organization, carried out a phone campaign the same day, encouraging California congresspeople to support CCPA .

On Capitol Hill, families and organizers divided into six groups of ten each, targeting legislators that had supported the bill in 2006, as well as members of the House subcommittee on Immigration, Citizenship, Refugees, Border Security and International Law subcommittee. The bill H.R. 182 was introduced into the subcommittee Jan. 6.

Although the bill has yet to be introduced in the Senate, the groups also met with Sens. Chuck Schumer (D-NY) and Robert Menendez (D-NJ).

Sandy Placido, an organizer with the Northern Manhattan Coalition for Immigrant Rights, says the bill has ten co-sponsors so far — a good sign given that it was introduced two months ago. “It’s a very strategic moment right now,” Placido said, because “Obama is the son of an immigrant and has talked about family unity being important.”

Nothing speaks more to the urgent need to pass the CCPA than the stories of the children. Nineteen-year-old Nicolas Nuñez is one of the millions of children adversely affected by the stringent immigration laws. His father was deported to the Dominican Republic in 2005. “I let out what I had in my heart,” Nuñez said. “Why do I have to be away from my father ’cause he’s not a citizen and I was born here?”

Nuñez was one of many affected family members that came to make their voices heard. Spouses, children and relatives boldly told their stories despite their immigration status.

“I’m speaking for those who are scared to speak out for themselves,” said Roxroy Salmon, a Jamaican immigrant fighting deportation. His children are all U.S. citizens. “I am campaigning on my behalf and others’ behalf who are in the same situation, so our children won’t be without their parents.”

“The system has been treating them bad,” says Chia-Chia Wang, an organizer with the American Friends Service Committee. “The unfair questions, the unfair treatment and the unfair system really angered them, and they wanted to talk about why the law is broken.”

Immigrant families pushed to humanize the immigration debate in Washington, D.C., bringing the family “to the forefront of policy making, to the face of legislators,” said Wang. That same day, the Government Accountability Office (GAO) released a report criticizing the effectiveness of the immigration enforcement program created in 1996. The program, known as 287(g) of the Immigration Nationality Act, deputized local law enforcers as immigration agents. Meant to reduce serious crime, it enabled local officials to deport immigrants for minor crimes like traffic violations or carrying an open container of alcohol in public.

The GAO report shows that current immigration policy revolves around the criminalization and subsequent policing of immigrants. “Many things about comprehensive immigration reform only lead to more raids, more enforcement and border security,” said Manisha Vaze, an organizer at Families for Freedom. Looking at immigration through the narrowing lens of criminal enforcement and the “increased technology on the border,” Vaze says, “heightens fear and keeps families apart rather than unified.”

With deportations at an all-time high, CCPA advocates are seeking to shift the tone within the mainstream immigration debate. Recently, the Corrections Corporation of America announced the opening of a new ICE detention center in Gainesville, Ga. The facility will house 500 detainees. According to Vice President of Marketing and Communications Louise Grant, the center, set to open in the summer, is expected to fill up by the end of the year — a clear sign of more deportations to come.

With comprehensive immigration reform far from view, organizers are hoping the straightforward CCPA will become law.

“We want this bill to pass now because the children can’t wait for comprehensive immigration reform,” Placido says. “This is about children’s rights; this is about families in need. It’s really about giving the judge the power to judge, to do his or her job and to keep families together. We think it’s a very simple thing to ask.”