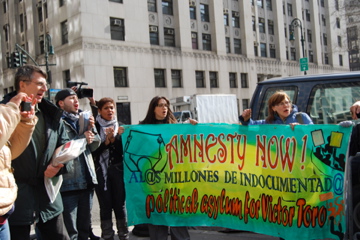 Once on the front lines of the Revolutionary Left Movement (MIR) that sought to oust Chilean dictator Augusto Pinochet from power, Victor Toro, ex-political prisoner, now finds himself facing a different kind of battle — as an undocumented immigrant fighting deportation. During Toro’s court hearing, on Mar. 25, friends and supporters gathered outside 26 Federal Plaza to demand amnesty — for Toro and for all undocumented immigrants. Judge Sara M. Burr will decide Toro’s case on the final hearing set for Aug. 26.

As a member of the MIR, Toro was imprisoned under Pinochet’s dictatorship and tortured. He came to the U.S. undocumented in 1984 after being released and declared dead in Chile. Toro became an integral part of his community by forming La Peña del Bronx, a non-profit organization that served the needs of South Bronx residents (La Peña del Bronx was shut down by police in 2002).

Having lived in the Bronx for over 23 years, Toro was arrested aboard an Amtrak train in Rochester, N.Y., in a raid by the U.S. Border Patrol on Jul. 6, 2007. Released on $5,000 bail, Toro, under the legal counsel of Carlos Moreno, has since filed for political asylum. Were Toro to be returned to Chile, supporters say his life could be in danger. “If he’s declared dead in his country, how is the government going to send him back there?” said protester Nina Paulino, “It’s like signing his death sentence.”

Under the 17-year dictatorship of Pinochet from 1973-1990, more than 3,000 people were killed and about 29,000 tortured. Pinochet came to power in a U.S. backed coup that overthrew socialist president Salvador Allende. Pinochet died in 2006 without being convicted of the human rights abuses he was charged with. Yet many reconcile Pinochet’s rule with his economic reforms that “saved” the Chilean economy. Chilean economists trained in the U.S. known as the “Chicago Boys,” implemented a series of free market and mass privatization policies throughout the country. But praise for Pinochet’s apparent economic successes mask the heavy unemployment and low wages that plagued Chile during his dictatorship.

Back on the corner of Worth and Lafayette streets outside the Federal Plaza, one protester remembers fighting alongside Toro back in Chile and later in New York. “I’ve known Victor Toro since we were young,” said Carlos Eden. “[He] is someone who has never abandoned his political ideals. He’s a political reference for us, that keeps us moving forward in the struggle for all — immigrants, workers, women, and children.”

And for those protesting Toro’s deportation, Toro’s case represents more than one individual’s struggle. “It’s not supporting just Victor Toro,” said Paulino, “it’s supporting all the immigrants in the U.S.” According to Immigration and Customs Enforcement (ICE), 345,710 immigrants were deported from the U.S. in 2008, triple the amount deported in 2001.

Protestors chanted slogans like “Stop the Deportations Now!” and “Somos Trabajadores, No Somos Criminales! (We are workers, not criminals!).” Waiting for Toro’s hearing to end, supporters held up a large bright banner printed with the words “Amnesty Now!” and “Political Asylum for Victor Toro.”

Soon enough, Toro came out of the building to cheers and applause, holding the red and black MIR flag. Addressing the protesters, he said in Spanish, “We, the social justice workers that are facing the current immigration system, know that the struggle we have carried out is on behalf of more than 12 million immigrants that are undocumented in this country.” With his white hair braided behind him and his fist in the air, Toro continued, “Anything can happen to us on an individual basis, the important thing is the struggle of all of us…this is the message of us undocumented immigrants because we know our struggle is the same struggle as those of the workers exploited in this country.” 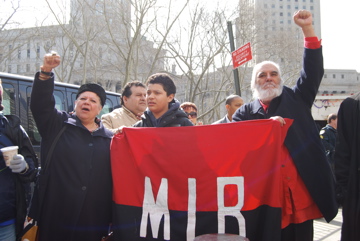