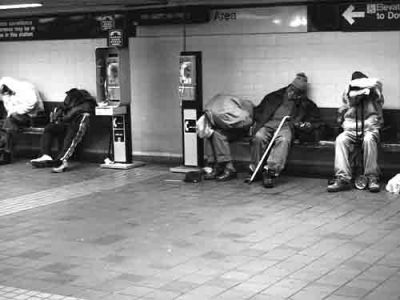 With the number of homeless families hitting record highs, a new plan issued by New York City’s Department of Homeless Services in December has advocates for the homeless worried about a cutback in services for the homeless citywide. Critics of the plan fear that more than 30 faith-based shelters might have to close and that overnight services in many drop-in centers would be eliminated.

“At the end of the day, [the proposals] will reduce overnight shelter and overnight capacity significantly and make it much harder for the street homeless to get the help they need,” says Patrick Markee, senior policy analyst at the Coalition for the Homeless.

The Department of Homeless Services (DHS) issued two requests for proposals (RFPs) Dec. 12 that involve the operation of five drop-in centers and a respite bed program for homeless single adults. The respite bed program would replace the current Emergency Shelter Network Program. The request, which is the process the city follows to contract out services, indicates that newly approved contractors will begin services in compliance with the RFP guidelines in early July.

The new respite bed program would mandate that faith-based and community shelter spaces be open for a minimum of five nights a week with a minimum of 10 beds. This will be difficult for some locations to do, as they rely on volunteer labor and have limited bed space. Other concerns include proposed changes to the screening process and the type of transportation to be used when moving the homeless from drop-in centers to shelter spaces.

DHS maintains that the plan will improve the city’s homeless policies. “Our strategies, including reorganization of our street outreach program and the RFPs, will continue to produce results and move street homeless individuals into housing,” spokesperson Kristy Buller wrote in an email message. “These innovative solutions have less red tape and barriers to entry, resulting in increased chances clients will accept services and housing, not less.”

John Benfatti, the co-president of the Riverdale Yonkers Society for Ethical Culture and emergency overnight shelter coordinator, may be forced to close his center because he does not have the volunteer labor or beds to meet the new requirements.

“We’re a very small operation, so I feel very threatened by what the mayor is doing,” Benfatti says.

Drop-in centers, which currently are open 24 hours a day, provide homeless people with vital services and refer them to church-run shelters or community centers outside the municipal shelter network. Many homeless people say that the city-run homeless centers are dangerous and refuse to go to them. If necessary, some facilities currently allow people to sleep at the drop-in center in folding chairs. The proposal would prohibit people from sleeping at drop-in centers.

Under the drop-in center directives, the facilities would only operate from 7:30 a.m. to 8:30 p.m. In addition, the plan would cut the budget for busing homeless adults to shelters, instead providing people with MetroCards to reach their designated bed. This could mean that individuals would arrive at respite beds at various times during the night, instead of together in one bus load.

“[In the proposals], there is no mandate for direct transportation between the drop-in centers and our shelters,” says Channa Camins, social action coordinator for Congregation B’nai Jeshurun.

Critics of the proposal also note that reducing drop-in center hours would limit the time available for pre-screening before individuals are assigned a respite bed. This could lead to intoxicated or potentially dangerous individuals finding their way to a shelter space.

Camins oversees a women’s shelter at her synagogue in Manhattan. “We need to be clear that we are providing for the safety of both the guests and our volunteers at all times,” she says.

The Coalition for the Homeless issued a report Dec. 15 entitled “The Bloomberg Administration Moves Forward to Reduce Emergency Shelter for Street Homeless New Yorkers” sharply criticizing the city’s new plan, which will be implemented through the RFPs. The report says that the plan will reduce overnight shelter placements by approximately 17 percent.

The cuts in services come on the heels of the closings of a number of drop-in centers and overnight shelters. According to the Coalition for the Homeless, the Bloomberg administration eliminated funding for two drop-in centers this past June, leaving nine in place. The new directives would close two more, and in Manhattan, where street homelessness is most concentrated, only three dropin centers would remain — down from the seven that were open before June 2008. Furthermore, the faith-based network will be downsized from the 56 spaces that are now available to about 24, with most of the closings concentrated in Brooklyn and Manhattan.

“The closing of the churches is a slap in the face to the hundreds or thousands of members of congregations throughout the city,” says Zoilo Torres, the director of the Emergency Shelter Network for the Partnership for the Homeless, the organization that links the DHS to the numerous religious or community shelters around the city. Torres says his organization did not apply for the DHS contract to help coordinate the network because “we basically felt it was bound to fail.”

The proposals come at a time of deepening economic crisis, skyrocketing foreclosures and a chronic shortage of affordable housing in New York. A report put out by the Coalition for the Homeless in December 2008 states that “as the current economic downturn worsens, the number of homeless families sleeping in municipal shelters has reached the highest point since modern homelessness began.”The report says that more than 36,000 homeless people sleep in the city shelter system each night.

While the regulations continue to raise concern among advocates, grassroots activism has pressured city officials to engage in conversations with ardent critics of the plan. Thousands of petitions against the proposals were submitted to the Bloomberg administration, and at a recent meeting between DHS Commissioner Robert Hess and shelter coordinators from around the city, there were some verbal reassurances that “they were willing to work with us and be flexible and meet most of the needs that we have,” said Cassandra Agredo, director of the St. Frances Xavier church’s mission.

Agredo sits on the Emergency Shelter Network’s steering committee, a newly formed group that is articulating the faith-based community’s concerns to Commissioner Hess. But, Agredo says, “We have no way of verifying that [our concerns] will go into the new contract until it actually happens or until they give us something in writing stating that they’re willing to meet our needs.”

DHS spokesperson Buller wrote in an email that the agency values “the assistance of our faith-based volunteers, as well as the clear role they hold in serving our homeless clients. DHS welcomes their continued involvement in a variety of ways and is committed to being as flexible as possible as we move forward.”

“[The mayor] is concerned about how much it costs to run the system as it is, and I agree from that perspective,” Benfatti says. “But we’re not dealing with a commodity that you buy and sell. We’re dealing with human lives.”