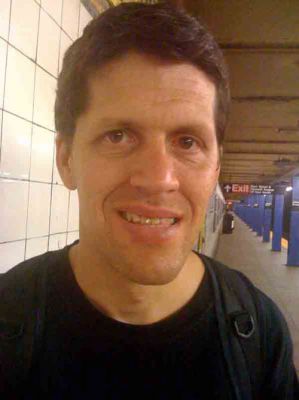 For many of the hundreds of Indypendent contributors and volunteers during the past eight years, it has been impossible to separate John Tarleton from the newspaper. Tarleton stepped into the office of The Indypendent in the spring of 2001 with a large backpack on his shoulders after a decade of traveling, writing and laboring as a migrant farm worker. A former daily news reporter, he immediately became involved in The Indypendent, a dinky newspaper struggling to define itself.

One hundred and twenty five issues and many millions of printed pages later, Tarleton, 41, is stepping down as a full-time coordinator of The Indypendent to become the Associate Editor at Clarion, the newspaper of the Professional Staff Congress, a progressive union that represents the 22,000 faculty and professional staff of the City University of New York.

Launched in September 2000, The Indypendent has grown to become one of the premiere alternative newspapers in the country and is a magnet for independent journalists, artists and community activists. Tarleton played a key role in the paper’s development as a writer, editor, volunteer coordinator and architect of the paper’s citywide distribution network, among other roles.

“John helped me find my voice as a young journalist and, in some ways, offered more guidance than my media studies professors at Hunter [College],” said Sarah Stuteville, who volunteered with The Indypendent from 2003 to 2005 and went on to found The Common Language Project, a nonprofit multimedia production house that reports on under-reported social justice issues worldwide. “He convinced me that journalism doesn’t have to be a career solely for elite Ivy Leaguers, but that anyone who really cares about the issues in their world can wade into the fray and pull out great stories.”

Ana Nogueira, the newspaper’s founder, says that Tarleton gave everything to the project. “When the newspaper had no money to pay him, he slept in a 3-by-8-foot storage closet in the back of the old office on East 29th Street with cracks in the walls that let the freezing cold air in at night,” Nogueira remembered. “He dumpstered for food while producing some of the best reporting this city has seen. His tirelessness has inspired hundreds of others to produce the same kind of quality reporting that deals with real life issues people in this city face every day.”

It’s this kind of reporting that has helped The Indypendent win more awards from the New York City Community Media Alliance for journalistic excellence than any other paper in the city five out of the past six years.

“I have never been around a group that works so hard and does so much with so little as The Indypendent,” Tarleton said. “The faces change but the kind of people who are working on The Indypendent in 2009 are just as amazing as those who were involved in 2001 or any time since.”

One of his best memories is of the paper’s early staff who virtually camped out at the office for 48 hours after the Sept. 11 attacks to publish the first of several special issues.

“The newspaper was only four pages but it covered so much important ground — including the possibility of endless war, attacks on civil liberties, harassment of immigrant communities and the role of the media plus deeply moving first-person accounts from Ground Zero,” Tarleton said. “It struck such a different tone from every other paper in the city. We rose to the occasion and have never stopped since.”

The Indypendent continues to be a labor of love produced by a tiny full-time staff and dozens of volunteers who do all the writing, photography, illustration, design, ad sales and distribution.

Publishing a feisty independent newspaper during a severe recession and in this moment of crisis for journalism will be a tremendous challenge.

“Building a broad sustainer base is key. The Indypendent is an unique community institution whose long-term strength and viability ultimately depends on its volunteers and readers. If we all get behind it, the newspaper will flourish for many years to come.”

The Indypendent collective wishes John the best on his new job. Thank you for all you have done during the past eight years!