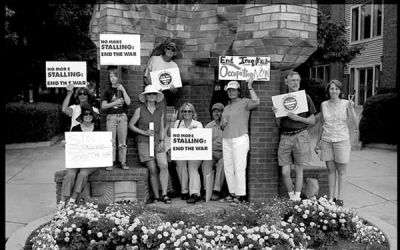 JOB INCOMPLETE: Antiwar activists with MoveOn.org July 17, 2007. The liberal organization believes the Iraq War will soon be over and refuses to oppose the surge of U.S. troops in Afghanistan. PHOTO: MOVEON.ORG

On March 2, the liberal organization MoveOn.org — known for mobilizing opposition to the Bush administration through the Internet — sent an email to its membership that declared the U.S. war on Iraq effectively over:

Dear MoveOn member,
“I’m sure you’ve heard about President Obama’s plan to finally bring an end to the disastrous war in Iraq. It will bring most of our troops home by August of next year — and by the end of 2011 there won’t be any more troops left in Iraq. This is a major turning point in the fight to end the war.

We wanted to take a moment to reflect on the work that you’ve done over the last six, dark years … to thank you, sincerely, for all you have done. … This war is coming to an end in part because of the work you did.”

While the letter acknowledges that “our troops aren’t home yet. Hundreds of thousands of them are still in harm’s way, and will continue to be for longer than any of us would like,” it says the bottom line is that “now there’s a date certain for them to come home.”

Reading this, I was reminded of the final line of Ernest Hemingway’s novel The Sun Also Rises: “Isn’t it pretty to think so?”

But MoveOn is not alone. Much of the antiwar movement has folded up its tents. The Iraq War has more or less dropped out of popular consciousness altogether. And the media report less and less about the ongoing problems there.

So it’s no surprise that the fine print of President Barack Obama’s plan in Iraq has gone largely unexamined.

Rather than pulling all U.S. troops out of Iraq within 16 months, as most Obama voters understood his campaign pledge, the redeployment of forces from Iraq will proceed over a 19-month period and will be backloaded to take place after December 2009.

The plan would maintain relatively high troop levels through Iraq’s parliamentary elections, to be held in December, before beginning in earnest to meet the August 2010 target for removing combat forces, the officials said. Even after August 2010, as many as 50,000 of the 142,000 troops now in Iraq would remain, including some combat units reassigned as “Advisory Training Brigades” or “Advisory Assistance Brigades,” the administration and Pentagon officials said.

Obama’s plan says nothing about the private contractors and mercenaries that are an essential part of the occupation of Iraq, and whose numbers may even be increased to cover functions previously provided by active- duty troops. And it will leave in place the world’s largest foreign embassy, as well as the largest CIA foreign station, in Baghdad.

Obama calls the troops who will stay in Iraq through the end of 2011 “residual forces” and non-combat troops, but this is just doublespeak. Combat troops are simply being renamed non-combat troops through a verbal sleight of hand, but will certainly be able to use lethal force and will find themselves in combat situations.

And in accepting the logic of the Bush administration for not withdrawing the troops immediately — that they are needed to fight al-Qaeda, engage in “counter-insurgency operations,” and continue the “war on terror” — Obama has opened the door to keeping them in Iraq beyond 2011.

Indeed, in his speech about the Iraq “withdrawal” plan at the end of February, Obama retroactively endorsed the Bush administration’s stated reasons for invading Iraq in the first place, as the Wall Street Journal gleefully noted.

We know that Iraq will remain under occupation until at least the end of 2011, but there is very good reason to believe that between now and then, the Iraqi government, which owes its survival to Washington, will cut a deal to allow U.S. forces to remain longer. Such an agreement would also likely give the U.S. long-term access to military bases and access to Iraqi air space.

The fact remains that Iraq is a fulcrum of geopolitics and a vital front for U.S. military strategy in the Middle East. Washington’s goals for Iraq and the region may be less ambitious than when the Bush administration launched its 2003 invasion, but no one is reversing the fundamental policies driving U.S. policy: the goal of controlling the region’s vast energy resources and being the hegemonic foreign power there.

MoveOn should be letting its members know this — and urging far more than to “keep watching Washington” to be sure they do bring the troops home. But to do this, the group would have to take on the Obama administration more forcefully on Iraq — and on the occupation of Afghanistan, which is intimately related.

Obama has said all along that he sees Afghanistan as the “central front” in the “war on terror,” and that he would commit more troops to the war there. But Justin Ruben, MoveOn’s new executive director, told Nation correspondent Ari Melber Feb. 27 that the organization did not intend to oppose Obama’s plan to send more troops to Afghanistan.

The message being sent to the antiwar movement is: It’s over. We can “move on.” Leave it to the generals to wind it down. But if we do that, we will find ourselves without the forces we need to challenge Obama and Congress.

The year 2011 is already too late to end the occupation of Iraq, which should never have started in the first place. And shifting troops from Iraq to Afghanistan is not ending the war.

Without an antiwar movement that is loud, active, in the streets and raising its own independent demands beyond the limits set by the Democratic Party, U.S. troops will not be coming home.

The empire has not folded up its tent, and neither should we.

This article was originally published by Socialist Worker. Anthony Arnove is the author of Iraq: The Logic of Withdrawal and the coauthor, with Howard Zinn, of Voices of a People’s History of the United States.