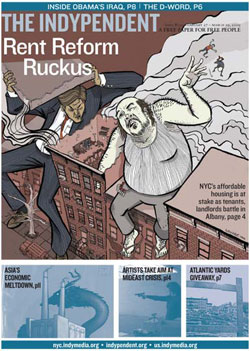 TENANTS HAVE RIGHTS TOO
Response to “Battle in Albany: Rent Reform Showdown,” Feb. 27:

The whole myth about rent regulation is that “owners lose money.” Built into rent regulation is a profit margin for landlords. If landlords who own rent-regulated buildings can’t turn a profit, then they are bad business owners (who probably want to be bailed out). City taxes are also quite low compared to the suburbs and although landlords scream about taxes, they don’t really have a complaint. Insurance premiums too high, join the friggin’ club complainer. Food and clothing are also regulated (e.g. FDA). Bad arguments; and this is why it is time to strengthen the rent laws.
—Anonymous

I’m so happy that these bills are moving forward, now it is up to us to let the New York State Senate know how badly New York City tenants need relief. Low-to middle-income tenants have been completely squeezed out of the equation by greedy landlords and developers. Hopefully the economic crisis will be an impetus to restore some balance. And if the landlords don’t want to own the buildings anymore then sell it to us tenants and we’ll run it ourselves.
—Maria

WHEN WILL IT END?
Response to “NYPD Racist Tactics Exposed,” Feb. 27:

Even the rather appalling figure of more than 500, 000 people stopped, mostly people of color, per year is probably too low. The police often don’t fill out stopand- frisk reports when they stop people. Another really damning indicator of the racial and class nature of policing in New York City are the number of arrests for minor offenses. The number of folks (mostly black or Latino) arrested for possession of pot increased ten-fold from 1997 to 2007 over the previous decade, to 400,000 people.
—Matt