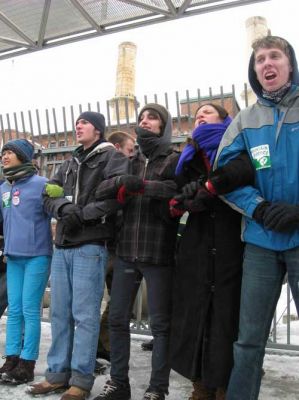 Environmental and human rights groups from around the United States say they will attempt to target coal-fired power plants and coal mining every day of the first 100 days of the Obama administration. The Power Past Coal Project is uniting organizations from across the country in order to “amplify the message” that the United States “needs to move past coal power.” Climate scientists say that burning coal is the greatest contributor to global warming.

Fourteen anti-coal activists were arrested in Knoxville, Tenn., March 14 as they participated in a “die-in” in front of the Tennessee Valley Authority’s (TVA) headquarters to show solidarity with the victims of the recent coal ash disaster at a TVA coal plant. In West Virginia, five activists were arrested Mar. 5 while protesting near a mountaintop removal coal strip mine operated by Massey Energy.

“I cannot talk about the problem and let the young people get arrested without me standing there,” Hansen said. “The young people are absolutely right. This is the time to send a message to the new administration that we want this problem solved. We need to phase coal out in the next two decades.”

Organizers won a partial victory days before the protest began when House Speaker Nancy Pelosi (D-Calif.) and Senate Majority Leader Harry Reid (D-Nev.) released a letter directing the Capitol Power Plant to switch to natural gas by the end of 2009, which still emits about half the carbon dioxide as coal per unit of energy, according to the U.S. Energy Information Administration.

“We see that Congress is willing to get coal out of their backyard,” said Nell Greenburg, communications manager with the Rainforest Action Network. “Let’s see if [they] can get the industry out of their back pocket.”

The March 2 protest occurred as more than 12,000 college and high school students gathered in Washington for the Power Shift 2009 conference to pressure Congress for more funds for clean energy and green jobs.

“Power Shift has been a really eye-opening experience,” said Ashley Fallon, 20, a marketing student from Loyola College in Maryland.

Energy Action, a coalition of 50 environmental groups, organized the Power Shift conference and the 350 meetings for youth to lobby members of Congress in what was described as “the largest-ever lobby day on climate change and energy.”

Roshi Lawrenece, a 20-year-old Marquette University student, traveled from Milwaukee, Wisc., to D.C. to encourage Obama to take action. Holding a sign that read, “Prove Us Right” underneath a painting of Obama’s campaign logo, Lawrence said, “Obama, during his campaign, tried to speak to us youth. Please Obama, get what you said done.” Lawrence said that he took time away from school last year to canvas and phone bank for the Obama campaign.

During the three-day Power Shift conference, students attended workshops and panel discussions ranging in themes from the histories of coal power, direct action and uranium mining, to media and leadership training, grassroots organizing and anti-oppression workshops. The conference also gave activists and groups a chance to discuss strategy around how to build a political movement to confront climate change.

“You have come here to have a voice about the environment. Our ancestors have been telling the government for 200 years to protect the environment,” said Travis Brown, a student at Haskell Indian Nations University in Lawrence, Kan., to a room of more than 200 students who attended a workshop titled, “Decolonizing Our Minds: How Colonization Affects Us Today.” Brown noted that native communities across the continent are being adversely impacted not only by mineral and fuel extraction companies, but are also suffering the effects of climate change on the landscape and eco-systems. “Our people are at the risk of being exterminated.”

Many students were moved by stories brought from people across the continent who discussed the effects of industrialization, capitalism and colonization in their communities, including high cancer rates, demolished mountains, polluted streams, radioactive mines, toxic dumps and changes in local flora and fauna.

Representatives from Arctic indigenous communities explained how the effects of climate change are more extreme at the earth’s poles and how they threaten their way of life because of melting sea ice, eroding shorelines, thawing tundra and shifts in fish, seal, whale and caribou migrations.

Marshall University student Heather Sprouse, 19, was deeply moved by the stories told by Rosemary Ahtuangaruak, an Inupait community health advocate, and Faith Gemmill, a renewable energy leader in the Gwich’in town of Arctic Village, Alaska. Both women told detailed accounts of increases in asthma and the loss of fish due to off-shore oil drilling.

“I didn’t know much about this topic before today,” Sprouse said. But she felt that the stories from communities in Alaska related to her experience in her home state of West Virginia, a state that has been deeply impacted by generations of coal mining and, more recently, the devastation of mountaintop removal coal mining.

“Personally I am interested in cultural preservation,” Sprouse said. “We are not able to farm, to make music any more due to the coal industry. … The people in my community are sick and they are tired. I don’t know what else to call it but cultural genocide.”