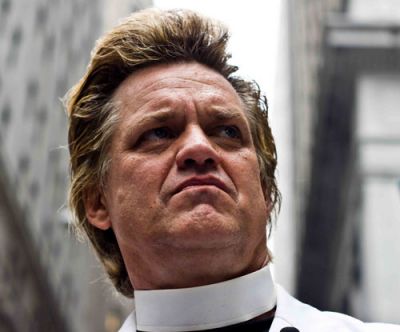 It’s hard to imagine someone as different from New York’s current mayor, Michael Bloomberg, as performance-activist William Talen (a.k.a. Reverend Billy), who recently announced his mayoral candidacy on the Green Party ticket.

While Bloomberg is often seen in a suit shaking hands with corporate developers, Talon wears a televangelist-style white suit and collar, and preaches against consumerism. He is the pastor, if you will, of the Church of Life After Shopping, formerly known as the Church of Stop Shopping. Directed by his life-partner Savitri D., the parody church holds services in which Talen’s sermons are backed by a 35-person choir. More often, however, they are out staging theatrical demonstrations against the chain stores and developers welcomed into New York by Bloomberg.

While Bloomberg recently said the state shouldn’t raise taxes on millionaires because “we want rich people from around the country to move here,” Talen’s preaches a gospel of community-oriented life. One of the main slogans for the campaign will be “the rise of the neighborhoods,” he says. “These bubble economies that come into neighborhoods isolate us from each other … make environments impersonal [and] concentrate money into the hands of a few unseen absentee landlords and bankers.”

What New York needs instead, says Talen, are “healthy neighborhoods” where “you know the people near you, you have congregating places, you have ongoing narratives … the buoyant fun life of a great sassy New York neighborhood is something [people] love.”

Although Talen relies on parody in his activist performances, this is a serious campaign. Talen has a high enough profile so he will have little trouble collecting the 7,500 signatures needed to get on the ballot. He is also fairly confident that the campaign can raise $250,000, which would entitle them to more than $2 million in matching funds from the New York City Campaign Finance Board. The campaign also has a staff of more than 50 people, mostly volunteers. It includes people with professional backgrounds in urban planning, city politics, climate science and graphic design.

Asked whether he can really win against Bloomberg and his giant pool of money, Talen took a meditative pause and responded, “absolutely.”

Check back soon for the entire interview with William Talen. For more information about Talen and his mayoral campaign, visit voterevbilly.org and revbilly.com.