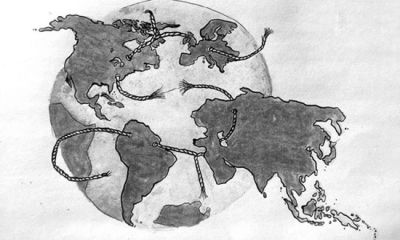 As the global economy heads for its first annual decline since WWII and the biggest decline in trade in 80 years, more and more commentators are using the term depression to describe the vertiginous economic collapse.

The rate of the decline is astonishing. Nouriel Roubini, a.k.a. “Dr. Doom,” writes, “The scale and speed of synchronized global economic contraction is really unprecedented (at least since the Great Depression), with a free fall of GDP, income, consumption, industrial production, employment, exports, imports, residential investment and, more ominously, capital expenditures around the world.”

During the Great Depression the global economy fragmented, leading to the rise of competing power blocs. Eventually, fascist Germany and imperial Japan launched wars of conquest for new markets and lands because they lacked the territorial and trade outlets possessed by the United States, England and the Soviet Union.

This crisis is at an early stage, but the process of global fragmentation has already begun, which means a greater likelihood of interstate military conflict. With the fading of the “war on terror” as the central U.S. battleground, China will probably return as the pre-eminent peril in the minds of the U.S. economic and political elite.

Recently, a sea-going confrontation and China’s lecturing the United States over debt indicates how the powers are skirmishing over military and economic interests.

China is using the economic crisis as an opportunity by dipping into its gargantuan cash reserves to stoke demand with a two year stimulus plan of $586 billion, which amounts to 14 percent of its annual gross domestic product, versus the Obama plan, which at $797 billion is less than 6 percent of U.S. GDP.

China is focusing on improving its industrial competitiveness, but has yet to address its minimal social welfare spending, which provides greater stimulus than infrastructure spending and spurs demand by allowing the Chinese to lower their high savings rate.

The bigger problem is the Asian economic model may be finished, with exports declining 33 percent in South Korea, where exports account for 60 percent of GDP, and 46 percent in Japan. Industrial output has dropped 43 percent in Taiwan. With consumer demand and business investment collapsing worldwide, countries can no longer export their way to recovery (a policy known as export-oriented industrialization).

These export drops are showing up in China, where imports have declined significantly. It plays a critical intermediary role in the global economy. Walden Bello describes China’s economy as the “overwhelming driver of export growth in Taiwan and the Philippines and the majority buyer of products from Japan, South Korea, Malaysia and Australia.”

This is precisely what’s happening in the 27-member European Union, where “peripheral states such as Latvia, Bulgaria and even Ireland have been brutally whipsawed from an era of heady growth to shockingly fast decline,” according to the Wall Street Journal.

The crisis threatens to unravel the post-Cold War economic order in which the West administered “shock therapy” to former Soviet Bloc countries by restructuring them along neoliberal lines. Twenty years ago, Soviet Bloc populations largely accepted the shock therapy with passivity, disoriented by the rapid collapse of Communism.

Peter Gowan, author of The Global Gamble, argues that the Western-imposed shock therapy in the early 1990s bankrupted and privatized East Europe’s industrial enterprises and dismantled the region’s integrated economy, known as Comecon. This paved the way for unsustainable bubbles in housing and construction, foreign credit and capital flows, low-wage manufacturing and remittances.

Central and East European (CEE) countries are dependent on exporting to meet Eurozone demand, which has collapsed. Net private capital inflows are expected to drop in the region by almost 90 percent this year to just $30 billion. Remittances, which account for 2.5 percent of Poland’s GDP and 8 percent of Ukraine’s GDP, are evaporating as migrant workers head back home jobless.

Germany and France are telling Eastern countries to look to the International Monetary Fund for help. While European institutions are giving East Europe the cold shoulder, offering only $30 billion in financing assistance for banks in Eastern Europe, the International Monetary Fund (IMF) is planning to double its $250 billion fund “to fight the financial crisis in emerging markets,” according to the Financial Times.

Neoliberalism has led to a historic crisis and been discredited as a political ideology and economic program, but international institutions like the IMF that enforce neoliberal policies are implementing a new phase of structural adjustment programs that will make weaker economies pay for the excesses of Western capital.

The IMF is disbursing loans while instituting new regimes of shock therapy to countries that include Hungary, Iceland, Latvia, Serbia and Ukraine.

Analyst Adam Hanieh writes: “The conditions that come with this latest round of IMF lending have been particularly opaque. … Hungary has agreed to cuts in welfare spending, a freeze in salaries and canceling bonuses for public sector workers yet the final details have not been made public. Iceland was required to raise interest rates to 18 percent with the economy predicted to contract by 10 percent and inflation reaching 20 percent.”

West Europe, meanwhile, is turning inward. In England protests are increasing against foreign investment and the 2.4 million foreign workers in the country. Xenophobia and economic nationalism will likely rise as unemployment does across the continent. More joblessness and bankruptcies will increase pressure by labor and capital for protectionist measures ranging from supporting domestic industries and more national stimulus plans to forcing out foreign workers and passing “buy national” provisions.

The effect could lead to greater pressure on Europe’s weaker economies, the growth of radical political movements on the left and right and perhaps the eventual disintegration of the Europe’s common market and currency. Already, large-scale protests or riots having occurred in Ireland, Latvia, Lithuania, Bulgaria, Iceland, Ukraine and Greece.

Russia would like to benefit from the turmoil both as a response to 20 years of U.S. policy to encircle it militarily and economically and out of rising nationalism. But its economy has been bloodied over the last year. The ruble, Russian stock market and oil and natural gas prices have all tanked, draining away $200 billion in the government’s hard currency reserves. Nonetheless, Russia will probably gain leverage over littoral states like the Ukraine and the Baltic region and Ukraine because of their lack of options.

Russia is trying to promote greater regionalization, and has cast its eyes east as part of this strategy. President Dmitry Medvedev predicted last November that “the high human and technological potential” of Asian-Pacific countries “will become the locomotive of sustainable world economic development in the future.” Recently, China inked a $25 billion deal to aid Russia’s state-controlled energy industry in exchange for about 100 million barrels of oil a year for 20 years. But this pact points to the limited role Russia plays in China’s economy, as a supplier of commodities and military hardware, while China exports more valuable consumer and industrial goods to Russia.

As for Latin America, its 2.2 percent GDP growth from 2002 to 2006, the highest level since the 1960s, was fueled by exports, mainly commodities, and remittances, which accounted for $59 billion or 2 percent of the continent’s GDP by 2006. With the contracting U.S. economy and plunging commodity prices, remittances and exports are falling quickly.

The difference in Latin America is the ascension of leftist governments in Venezuela, Bolivia and Ecuador that are forging new economic relations by “nationalizing natural resources and redistributing the subsequent wealth to social programs to benefit the countries’ poor majorities,” writes Benjamin Dangl, founder of the website upsidedownworld.org.

Venezuela is promoting the “Bolivarian Alternative for the Americas” (in opposition to the neoliberal Free Trade Area of the Americas) as a regional economic pact based on “cooperation and solidarity,” and which encompasses related agreements on energy, finance and media. It’s mostly been limited to technical cooperation, subsidized oil supplies and barter agreements, particularly in healthcare, which have proven effective and popular, but are a long way from creating a regional economy.

Washington may look to Latin America as an outlet for capital expansion, such as with the Plan Puebla Panama, which has been in the works for a decade. Public funds and money from international institutions would be used to create an export-oriented industrial zone from southern Mexico through all of Central America.

These types of projects provide a “spatial fix” for capitalism by reorganizing new spaces that serve as sites where surplus capital (and labor) can be deployed as a way to alleviate crises of overproduction.

More ominously, Washington may seek to renew its imperial project in Latin America. Greg Grandin writes in Empire’s Workshop that the United States used Latin America historically as a “staging ground” for the “early push towards empire,” then as a school to study how to “execute imperial violence through proxies,” and most recently as a site for a resurgent “nationalist militarism” that began with the Central America wars of the Reagan presidency and culminated in the post-Sept. 11 wars.

Thus, given a declining economy and the need for domestic capital to find new markets, the United States may be tempted to use the Pentagon to launch adventurist wars in Latin America as a solution to its economic woes.

While many people fondly talk of a return to New Deal economics, it was World War II that pulled the U.S. economy out of the Great Depression. The solution to the global crisis requires restructuring economies to stimulate widespread demand while not feeding production and speculative bubbles, which means a redistribution of resources. Absent such measures, authoritarianism and militarism will have growing appeal. Just like the 1930s.