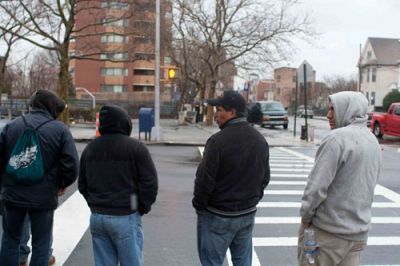 NO WORK: Standing along Roosevelt Avenue in Queens, day laborers wait for hours on end for any type of work to come their way. With unemployment reaching 8.5 percent in March, day laborers are lucky to work once or twice a month. PHOTO: ALEX NATHANSON

Clusters of immigrant day laborers gather on the fringes of Green-Wood Cemetery in central Brooklyn, looking for work as early as 6 a.m. every day. They take any job they can get — construction, painting, gardening — but lately, they wait for hours only to come home empty-handed.

Raúl is a Mexican immigrant who lost his job three weeks ago and has worked only two days since. “There’s nothing. There’s no movement, there’s no money here,” he says.

With four kids back in Puebla, Mexico, Marcelo, who has been in the United States for five years, just wants to go back home. But between rent, remittances and food, “I can’t make enough to go back,” he says.

“It’s not the same as before,” says Vicente, an undocumented immigrant from Ecuador, who just went days without finding work. “But as bad as things are here,” he says, “it’s always worse back home.”

Many say they have stopped sending money back to their home countries; others are borrowing from friends or living off their meager savings, crowding into apartments with friends and family.

In Woodside, Queens, day laborers gather around Roosevelt Avenue between 65th and 73rd Streets. “There used to be about 100 of us,” says Alan, an immigrant from Mexico, who was laid off five months ago. “Now there are about 800.”

“Day laborers are one of the most affected classes,” says Ligia Guallpa, coordinator for the Latin American Workplace Project. “They work informally without any structure and there’s no way workers can protect themselves from unemployment.”

According to the U.S. Bureau of Labor Statistics in March, the unemployment rate for whites is 7.9 percent, while 13.3 percent of African-Americans and 11.4 percent of Latinos are unemployed.

“People of color have been hardest hit in every economic downturn this country has experienced,” says Maya Wiley, founder and director of the Center for Social Inclusion. “Part of this is because people of color are the last to be hired and the first to be fired.” And historically, it has been people of color who have been politically marginalized.

“But have you seen anyone from Congress here to help us?” asks José, a day laborer from Cuenca, Ecuador, who has been in the United States for more than nine years. “Either way they blame us — the immigrant — for coming here. They don’t care about us, we are the illegals.”

Tired of worksite exploitation, unemployment and heavy anti-immigrant sentiment, some day laborers are organizing around International Workers Day (May Day).

Roberto Meneses, founder and president of Jornaleros Unidos (United Day Laborers), says this economic crisis is an opportunity to unite, educate and find commonalities among all workers.

“Other workers look at us as the rivals,” Meneses says, “but they don’t realize we are victims of the same system. In our countries, we were also fired, because the crisis began a long time ago in our country.”

Organizing workers with no stable jobs, set hours or common work sites provides a unique set of challenges; a majority of the day laborers The Indypendent spoke to at Green-Wood Cemetery were unaware of May Day or organizations such as Jornaleros Unidos.

And even for those involved in organizing, participation in May Day is not certain. Alan, a member of Jornaleros Unidos says he’s not sure he’ll attend the marches on May 1. “It’s one day of work and sometimes you only work once a week,” he says.

“The system has brainwashed us,” Meneses says. “They teach us to think individualistically, not collectively.” He adds, “We learn to think that way — but now look where we are. We are the first ones affected and the ones with the least defense. It’s important for us to organize.”

The New York City May Day rally will begin at noon in Union Square, followed by a march to Federal Plaza at 5:30 p.m.

For more information or to participate in the May Day rally contact:

For more information on day laborer rights’ or to file a complaint, contact:

Journaleros Unidos will hold March for Dignity and Worker’s Rights on April 19 at 11:30 a.m. on Roosevelt Ave. and 69th st.

To read more about May Day 2009, click here. For more from Karen Yi in this issue of The Indypendent, click here.