Kokou Ado, a 26-year-old undergraduate chemistry student at City College of New York lost his job when the retail store he worked in as a security guard closed. “Finding a job was difficult because I go to school and study all day,” he said. Eventually, Ado found another security guard job, but the stress of being out of work and in school hurt his grades, he said.

As local art galleries lose patrons and eliminate pay for interns, Heather Saenz, a 20-year-old art history undergraduate at Columbia University, cannot afford an unpaid internship to gain the experience she needs to get a job in her field, which is rare books.

Suman Saha Ray, a 27-year-old biochemistry undergraduate at City College said the antiquated equipment in the school’s labs is not being replaced, and that there is less demand for research. “We have to wait around all day to get things done because we have to share equipment,” he said. “This economy is really affecting everything.” 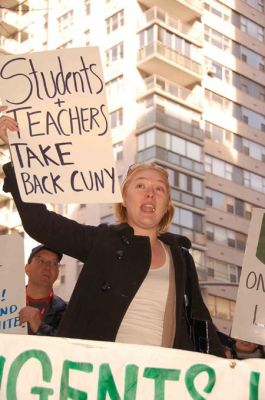 College is commonly believed to be the best place to be during a harsh job market and economic slump; however, as students’ budgets become tighter and tuition continues to rise, the struggle students are experiencing to pay for school is challenging that conventional wisdom. According to students, administrators and teachers in New York City, the U.S. economic recession has made college life just as difficult, if not more, than life in the “real world.”

This economic downturn, marking its 17th month in April, has made paying for already high tuition and costs of living much harder for both middle- and low-income students.

Since 1984 college tuition has increased by 439 percent — faster than medicare, food and housing, according to the research group, The National Center for Public Policy and Higher Education’s 2008 report, Measuring Up. For lower-income families, the cost of college is now, on average, 55 percent of their income, and 25 and 9 percent for middle- and high-income families.

Before the economy fell, paying record high tuition may have been a struggle, but it was possible for most students. This economic climate, however, is straining families and students as they continue to make ends meet semester to semester. Unemployment reached a 25-year high in March when it hit 8.5 percent, leaving an estimated 13 million people jobless. As jobs are lost, paying for education is increasingly difficult.

“I’ve seen students and parents lose jobs,” said Jennifer Gabourey, a graduate student at Hunter College who also teaches night classes at Hunter College. Gabourey is a member of City University of New York (CUNY) Contingents Unite, a group of teachers and administrators for the CUNY college network that is speaking out against proposed tuition hikes and state budget cuts. “I’ve seen a lot of kids drop classes, and I sign a lot of withdrawal slips too,” she said.

CUNY students, for example, are feeling crunched by the recession. The state’s proposed 2009-10 budget will cut CUNY funding by $65 million. CUNY administration is proposing a tuition hike of $300 per semester for senior colleges and $200 for junior colleges. This follows a 2008- 2009 budget that decreased state funding by $215 million and increased tuition by $320 per term.

The budget cuts and tuition hikes at CUNY, where students rely heavily on its low tuition and commonly work to pay for school themselves, mean many are going to have to work harder than ever to make ends meet. “This is a regressive tax against the students,” Gabourey said. “I’m startled at how profoundly unjust this is.”

In reaction, CUNY students are continuing to organize. More than 50 students rallied March 25 against the tuition hikes and budget cuts at Hunter College, at 68th Street and Lexington Avenue, chanting and holding posters.

More than 60 New School students occupied a portion of a vacant building, 65 East University Street, April 10 to demand greater transparency and accountability from the administration and increased student involvement in the school’s budget. Nineteen students were arrested in what was considered an aggressive NYP D operation. Earlier this year, dozens of New York University students occupied a school cafeteria to protest, in part, their high tuition.

As more family members lose their jobs, students often are expected to pitch in to help cover tuition expenses. According to the U.S. Department of Labor, 37.3 percent of full-time students, and 72.7 percent of part-time students, held jobs in 2007. Data for 2008 has not yet been released; however, according to New York City administrators and students jobs are in high demand and hard to come by.

Many of the jobs that provide the flexibility that students need are the same ones the recession has claimed. The service industry has seen far less customers, and in days of slow business, part-time positions are in low demand by employers. Some students even reported having trouble finding babysitting jobs as families try to cut expenses.

Joseph Knox, manager of recruitment and labor relations for Columbia University Libraries, said there has been a sharp increase in the number of students looking for campus jobs. Due to the fixed number of jobs created in the previous year’s budget, the school cannot accommodate hundreds of students who want, and need, work.

Gabourey also reported witnessing many students drop classes in order to take on more hours at their job.

One Columbia University student was laid-off from her tutoring job and had to find work off campus, which is illegal for foreign students. For this student, who preferred not to be identified fearing that her student visa could be revoked, finding a job was a necessity. Due to a drop in the Korean exchange rate, paying her tuition and living expenses has become more difficult for her family in Korea.

“All the campus jobs were filled so I had to find work somewhere,” she said.

Other students, like Melissa Ramnerine, an 18-year-old hospitality student at the New York School of Technology, cannot find work either. “My mom works in the hospitality industry too, and they are cutting her hours and laying people off,” she said. “I want to get experience for my major and I’ve looked for work, but I cannot find any jobs, and I need one because I got denied financial aid.”

Layoffs, resulting in a decrease in total family income, has caused students who already work to take on more hours, forcing them to cut back on classes and study time. A recent study by the U.S. Public Interest Research Group noted that 42 percent of students working 25 hours or more a week reported that their job hurt their grades. Fifty-three percent of the students reported that working limited their class schedule and 63 percent said they could not afford school without working.

“I have to find a new major because I don’t have the time to do the drawing for my architecture classes,” said Paul Gowistowski, a 21-year-old undergraduate student at the New York City School of Technology. Gowistowki moonlights full-time as a construction worker in United Association Local 1, and said he has seen an estimated 80 percent of the employees at his company get laid off in recent months.

“I go to work at 3:30 p.m. and work until midnight,” Gowistowski said. “I’ll have to try engineering, but I don’t know if I’ll have time for that either.” 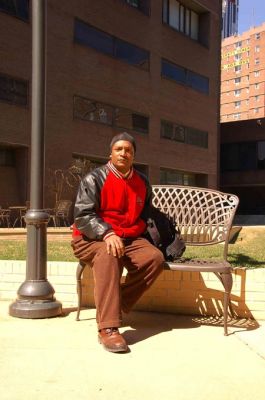 FUTURE UNKNOWN: Charles Jones, a 30-year-old education student at Long Island University, is only a few semesters from graduating and fears that he will not be able to find a job. Already working as a teacher’s assistant, Jones has seen a number of lay-offs and budget cuts in the New York City Public schools where he plans to work. PHOTO: CHRIS CASCARANO

Charles Jones, a 30-year-old education undergraduate student at Long Island University, said he can barely balance both school and work. Jones works full-time as a teacher’s assistant at a public school on top of a 16-credit-hour course load. “I’m not even sure how I manage to do both, but it’s a stress,” he said.

Some young people are asking themselves, “why college?” and others, “why work?” Evidence shows that the recession has also created a push-and-pull affect amongst young people deciding what to do after high school. Those who can easily afford higher education are continuing with school to avoid desiccated job markets; those who cannot attend, in greater numbers due to the economy, are looking at other options. It seems too risky to pay thousands of dollars in tuition, and possibly land in debt, in a shaky job market.

“I’m worried because I’m getting an English degree that is worth nothing in the real world,” said the unnamed Columbia student who had to find work off campus. “One professor is telling us all to go to graduate school because academia will be the safest place for us to find jobs.”

For others, college has created a shelter during the recession. “Things really aren’t that bad for me because I’m going to medical school when I graduate,” said Dan Ping, a New York University music and chemistry undergraduate.

Many schools are scaling back needblind admissions, giving those who can afford school better chances of acceptance over those who would need financial aid. At the other end of the spectrum, there are an increasing number of young people interested in opportunities outside of higher education. In the latest propensity study by the U.S. Department of Defense, the military has seen the first rise of interest in joining among 18- to 24-year-olds since 2001, according to Eileen Lainez, a spokesperson for the DOD. Since the military has a fixed number of recruits each year, and the number does not change, the propensity study is the only indicator that more young people are looking at other options than school.

Other institutions are observing similar trends, including AmeriCorps, a federal organization that helps young people pay tuition in exchange for U.S.-based volunteer work. In 2008, AmeriCorps had 3,151 applicants, and in 2009, 9,731, according to Sandy Scott, a spokesperson for AmeriCorps. “We have seen a significant spike [in applications] due to the economy,” Scott said. “I think it is driving young people towards volunteering.”

Unanimously, the recession has caused anxiety amongst students soon to make their entry into working world. Many of the jobs lost are those that college graduates would likely be applying for. According to the State’s report, 32,000 professional and business were lost since February 2008, and financial activities lost 28,900 jobs. 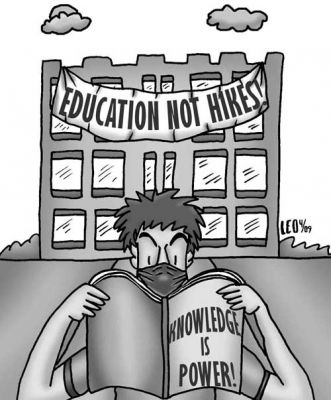 “I’m starting to wonder what it’s all worth if there isn’t a job at the end of my education,” said Lisa Anchin, a comparative literature Ph.D. student at Columbia University. “It is reassuring to be in school, but I still have to find a job when I get out. I don’t think French departments [which she plans to teach in] are doing so well.”

New York University student Ping was one of the few students who remained optimistic about the U.S. economy and his future. “It will be okay eventually,” he said. “What goes down must come up.”