COCHABAMBA, Bolivia—Today in Bolivia, congress will vote on a provisional electoral bill that would, if passed, ensure a presidential election on Dec. 6 of this year in which current president Evo Morales of the MAS (Movement Towards Socialism) would run. The law would also allow the indigenous population more voting power in congress. Today is the third deadline for the controversial vote, the original being April 9.

It’s so inflammatory that Morales has been on a hunger strike for five days protesting opposition groups in the Senate who are essentially stonewalling the new law, which requires a two-thirds consensus to pass.The law — that includes the specifics of the country´s new electoral system mandated in the new constitution — would in all probability ensure Morales´s presidency for another term.

Leaders from front-running opposition parties-such as PODEMOS-are against, for one thing, the fact that the new electoral provision guarantees 14 seats in congress for Indigenous, which they see as blatantly benefiting MAS politically.

Morales, Indigenous Aymara himself, and MAS were brought to power in 2005 largely through the support of Bolivia’s indigenous population, and retain relatively high popularity among workers, farmers and the 36 indigenous of Bolivia — to whom he ceded land rights, work protection and even sovereign community justice provisions in the new constitution. Critics say the opposition is blocking the electoral provision solely to buy their parties time to garner a broader base of support. 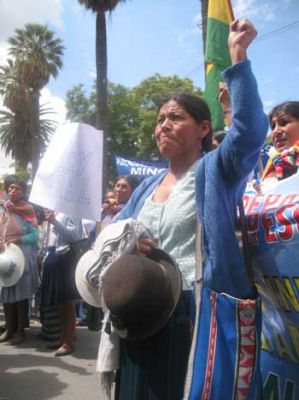 According to Xavier Claros Santa Cruz, a MAS government official here in Cochabamba, “The opposition is looking for an excuse, any excuse to postpone this December´s elections … what the’ve come up with is revamping the electoral system. They are claiming that the method of writing votes must be converted to computers, with fingerprint scans, etc. This would cost Bolivia $35 million (U.S.). That´s money that Bolivia does not have.”

Today in Cochabamba, about 30 hunger strikers (mostly farmers from outside of the city) were moved in the government prefecture building in Plaza 14 de Septiembre to continue their strike (that began with Morales’ own on Thursday) and receive free medical care from city health workers.

Also today, the city government held a rally, speaking to the masses below in the Plaza from the balcony of the prefecture. Behind the various speakers lay 30 or so hunger strikers on mattresses on the floor-some sleeping, some receiving medical attention, some drinking water or chewing coca, the only things they’ve consumed in the last five days. It looks something like a makeshift hospital decorated with handwritten protest signs. I was, however, assured that all of the hunger strikers are in good health. In the presidential palace in La Paz, as well, hunger strikers — including Morales — are sleeping on mattresses on the floor.

It is a historic moment in a country that has had more than it´s share of historic moments in the last decade. If Morales is blocked from running for a second five-year term, many member of the MAS have said they will resign, shutting down the legislative branch for all intents and purposes. Additionally, it is unclear whether or not there is enough infrastructure in place to guarantee the continued, hard-earned rights of the Indigenous in the future were Morales to lose power now. 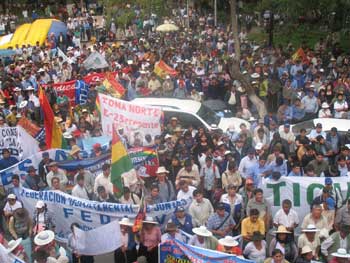