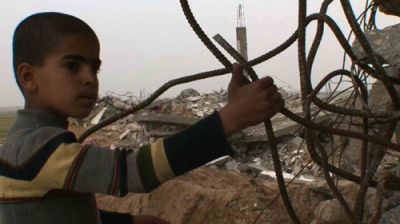 LOST CHILDHOOD: A child from the Najjar family in Khoza’a stands in the remains of his home in March, which was destroyed by white phosphorous and bulldozers in an Israeli attack. PHOTO: JACQUIE SOOHEN

GAZA STRIP —In March I entered Gaza via Rafah with an international delegation led by the U.S. women’s peace group CODEPINK. Three months after the invasion the memories from Israel’s war on Gaza are still fresh. In just over four days, I heard a litany of horrors.

One family of 10 in Jabaliya, in northern Gaza, hid under the staircase of their destroyed home for 12 days with no food and little water while U.S.-made F-16 fighter planes and Apache helicopters dropped bombs all around them. “Each day felt like an entire year,” 42-year-old Jihad said. His mother, Mahdiya, can vividly recall how, as a terrified young bride in 1948, she was driven by Jewish militias from her birthplace of Simsim — now a nature reserve in Israel. She’s lived through decades of Israeli occupation in Jabaliya refugee camp, the largest and most crowded camp in Gaza, and the birthplace of the first intifada in 1987. But she said she had never experienced such savagery as this recent assault. “Every day we died anew,” Mahdiya said. “But at least we only lost our home and not our children.”

For others, such as Dr. Ezzeldin Abu al-Aish, a well-known doctor and peace advocate who lives in the same neighborhood, Israel’s war resulted in a wrenching loss. A day and a half before the official end of the war, Israeli tanks fired deliberately on his home, killing three of his daughters and his niece in an instant.

On the same day, Mohammad Shurrab from Khan Yunis refugee camp was driving home from his orchards when Israeli soldiers fired at his car. As his sons stepped out of the car, the soldiers shot 28-year-old Kassab in the chest and 18-year-old Ibrahim below his knee. Kassab died instantly and Israeli soldiers warned the injured father that if he made a single phone call he would risk losing his second son as well. Over the next 12 hours, Shurrab could only watch as his second son bled to death. “When the ambulances were finally permitted to come at midnight,” he said, “it took one minute to reach the hospital. I went to the emergency room and my two young men went to the morgue.” 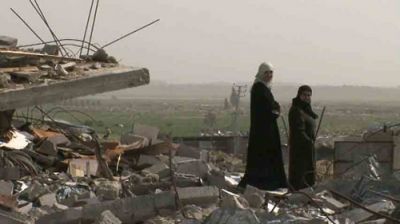 WITHOUT A HOME: A mother and daughter stand in rubble in March, surveying the destruction of their neighborhood, Ezbat Abed Rabbo, near Jabaliya. PHOTO: JACQUIE SOOHEN

In the farming village of Khoza’a, several members of the Najjar family crowded into a single room late on Jan. 12 as bulldozers demolished their homes, farms and livestock, and white phosphorous rained down from above. The next morning a group of 20 women came outside waving white flags. Rouheya, a mother of three, was shot in the head by an Israeli sniper and left to die on the street. She bled for over 12 hours before her family or medics were allowed to approach her body.

“Resistance? What resistance?” Iman Najjar, Rouheya’s neighbor asked as she recounted the killing. “We were all sitting in our homes shaking with fear. They knew there was no one to fight. We were just animals in a pen to them.”

The Sammouni family in Zaitoun, just east of Gaza City, lost 29 members in early January. On Jan. 5, tank shells struck a home sheltering dozens. After four days, rescue workers found a few deeply traumatized and wounded survivors trapped in a pile of rubble and corpses. Staring out at the ruins of his home and small farm, Abu Adnan is haunted by what happened: “I came face to face with death. How can I ever forget seeing the bloodied and dismembered bodies of my own family?” His cousin Hamed As-Sammouni added, “This used to be lush farmland. Now it’s a land of ghosts.”

Amira Hass, who has reported for Israel’s Haaretz newspaper from Gaza and the West Bank for almost two decades, was struck by the intensity of this latest war. “The Israeli army attacked Gaza as if they were fighting the American army. It’s nonsense to say the IDF did not intend to kill civilians. They know Gaza very well and they know there are civilians everywhere.” 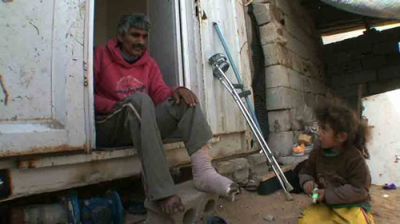 STAYING GROUNDED: Abu Adnan, from the Sammouni family in Zaitoun, sits with his daughter in March at the trailer located where their house once stood. PHOTO: JACQUIE SOOHEN

For many families in Gaza, particularly those who live in the south near Egypt, the war did not end with the ceasefire announcement on Jan. 18. In early February, Apache helicopters hovering over Rafah destroyed Abu Jameel’s home, farmland and a car he had just purchased in the hopes of supplementing his dwindling income as a driver. This is the second time Abu Jameel has been made homeless. He used to live along the border and several International Solidarity Movement activists including Rachel Corrie had tried to protect his home from being demolished. Caterpillar bulldozers destroyed his home in 2004, a year after Corrie was killed.

As these devastating stories testify, Israel’s war on Gaza did not just last 22 days. And long before this war, Israel’s crushing blockade of the Gaza Strip — supported by the United States and the European Union — had reduced life to mere survival for a majority of the population. The Israeli policy of closures, begun in the early 1990s, developed into a blockade after Hamas won the elections in January 2006, and then into a full-scale siege in June 2007.

More than a year ago, Harvard research scholar Sara Roy described the situation in stark terms: “Gaza is no longer approaching economic collapse. It has collapsed.”

It seemed unimaginable that things could get worse. But they did.

Some 1.5 million people are trapped on less than 140 square miles of land. Unemployment is at 70 percent, 80 percent live below the poverty line, and 90 percent of Palestinians are dependent on the trickle of international food aid that Israel allows in. The rest are forced to live off expensive goods smuggled in through illegal tunnels that are the target of almost daily bomb attacks.

Gaza is buried under 600,000 tons of rubble but reconstruction remains a distant dream. Since last November, Israel has allowed just a single truck of construction materials into Gaza. The $5.2 billion pledged at the international conference to rebuild Gaza will remain an empty gesture unless there is real pressure to end the siege and open the borders.

Despite their enormous loss, the people of Gaza remain resilient. Everyone I met was insistent on staying on their land, even if their homes are destroyed. But they want justice and an end to Israel’s impunity. Abu Omar, who owned a tile factory in the now flattened neighborhood of Ezbat Abed Rabbo, said he wants to go to court and fight for reparations from Israel. “Why do we need to rely on the sympathy of the world? We want the world to stand by our rights. We don’t want their charity, little bits of money and food. We are just asking for our rights, nothing else.”

Anjali Kamat is a producer at Democracy Now!

To read about the recent election in Israel, click here.